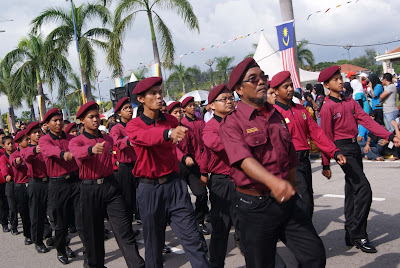 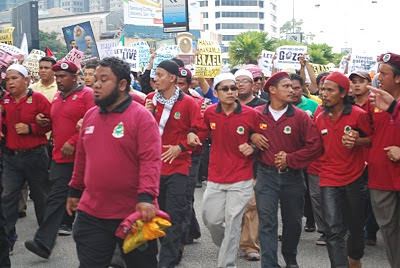 A day after police arrested 156 members of the Penang Voluntary Patrol Unit (PPS), the home minister says he is "sure" police will act against the PAS volunteer corps Unit Amal too.

"The same action will be taken by the police. I am very sure they are going to take action," Ahmad Zahid Hamidi told journalists in Kuala Lumpur today.

The minister said this when asked about the difference between the PPS and Unit Amal, which has operated for decades and facilitated in crowd control for opposition protests as well as PAS' community events.

"Is the IGP wrong (for taking action)? When he is challenged by a leader from the state," said Ahmad Zahid.

Lim had said the state government will provide legal assistance to PPS members if they were arrested by police for simply being associated with the outfit.

The remark came shortly after Khalid instructed PPS to cease all of its activities, claiming that it was an illegal organisation as it is not registered with the Registrar of Societies.

The Penang government, which set up PPS four years ago, had rubbished that claim of illegality, pointing out that it was no different than local committee villages which are also not registered.

'Security is a federal prerogative'

However, Ahmad Zahid today said residential area-based outfits such as Rukun Tetangga, are gazetted by law.

"If they want to take care of security, we have Rela and for community policing we have Rakan Cop that can help.

"There is no need to form another organisation that appears to want to challenge (the authorities)," he said.

Ahmad Zahid insisted that matters relating to security were a federal prerogative and not the state government's.

He added if PPS is allowed to exist, then other states too will demand for similar outfits.

He also claimed the PPS assaulted members of the public and engaged in intimidation.

"Previously, Lim had applied to the Home Ministry and Bukit Aman to issue a letter allowing the creation of an auxiliary police force in every local council.

"But police at that time found out that auxiliary police had political purposes therefore it was not approved," he said. However, Ahmad Zahid refused to disclose the nature of information about the alleged political motives.

PPS was declared illegal by federal authorities shortly after one of its members got into a scuffle with a businessman who is a staunch critic of the DAP-led Penang government.- mk

Seri Delima assemblyman RSN Rayer has been detained under the Societies Act today, and is currently being held at the Northeast District Police headquarters at Jalan Pattani.

Rayer said the police asked him to give his statement at about 3pm and then told him about the arrest.

"I was only told it is under Section 43 of the Societies Act, 1966. They also told me I have to stay the night at the police HQ," he added.

Among those arrested were state cabinet member Phee Boon Poh who is PPS chairman.

Rayer, is one of the lawyers for the group, who are currently being released in stages, after police failed to obtain a four day remand to keep them behind bars.

They were arrested as Inspector General Police Khalid Abu Bakar  declared the PPS illegal as it was not registered with the Registrar of Societies.

He has also accused PPS of being involved in "gangsterism". - mk 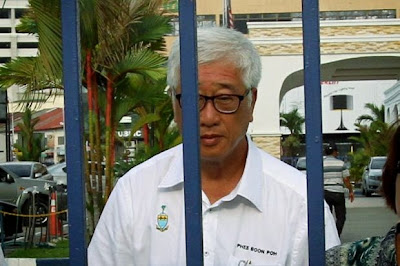 Phee Boon Poh, the chairperson of the Penang Voluntary Patrol Unit (PPS) who was arrested yesterday, claimed that he was interrogated by the police for four hours and was treated like a “criminal”.

"They asked me all sorts of questions, snapped my photographs and took my fingerprints, just as they would do to a criminal," Phee said in a telephone interview with Malaysiakini about 1.30am.

The state executive councillor, who is in charge of PPS, was arrested at the Northeast District police headquarters on Jalan Patani about 4.30pm yesterday, after his statement was recorded.

He was one of the 156 people detained by police after they took part in tbhe state Merdeka Parade march at the Esplanade yesterday.

"I do not blame the police, they were very nice to me. They are victims of circumstances," said Phee.

"But so am I - I am also a victim of circumstances," add the exco member, who holds the caring society and environment portfolio.

So far, seven women and 13 PPS members above 60 years were released this morning, while last night, three were sent to the hospital after they complained of being unwell.

Inspector-General of Police Khalid Abu Bakar last Tuesday declared PPS an illegal organisation as it was not registered with the Registrar of Societies (ROS).

Khalid warned he would arrest PPS members who continue with their voluntary activities, which includes urgent response to disasters and community service.

The police chief also dismissed the 9,000 members of PPS as "gangsters", which Phee had vehemently denied, saying that the unit is a state government agency.

Phee spent the night with other PPS members in the police lock-up, some sleeping on the floor as there were not enough beds available.

"At least, my men know that I have not abandoned them and that if they have to spend the night in a lock-up, so would I," said the 62-year-old politician with a distinctive crop of snow-white hair.

Phee did not get to see his wife and daughters who were waiting outside the gate of the police headquarters.

Penang Chief Minister Lim Guan Eng, who was with Phee when he was arrested at 4.30pm yesterday, met Phee's family around midnight and advised them to "go home and rest".

Lim, who also gave his statement to the police, remained with Phee at the state police headquarters until after midnight.

Phee, who is Sungai Puyu assemblyperson, said his family was shocked by the arrest.

"They did not expect this to happen to me. But what to do, this is the price I have to pay for working hard to ensure all my programmes for the people are successful."

He hinted that the mass arrest yesterday was part of a plot to rid Penang of PPS.

"I am not worried for myself, but for what would happen to the PPS team," he said.

Phee claimed that police had earlier informed him that he could be remanded for up to three days. He was also told that he was being investigated under Section 43 of the 1966 Societies Act, which involves operating a secret society.

Phee laughed at the police investigation, saying, "This must be the first time in history that a secret society has uniforms."

According to Phee, he was scheduled to take part in a rehearsal to receive the remains of two MH17 victims at the Penang International Airport at 11am today.

"Now they have to find someone else to attend the event," he lamented.

He also took a dig at press reports, which he said "played up" the issue of businessman Ong Eu Soon, 51, who was allegedly assaulted by two PPS men in Air Itam on Aug 17.

"If they did not play it up in a big way, yesterday's incident wouldn't have happened. But I don't blame the reporters," he said.

The duo had strongly denied attacking Ong, saying that the businessman had hit them first.

On the arrest of the PPS members following the Merdeka Parade at the Esplanade, Phee said this was an insult to Penang Governor Abdul Rahman Abbas, who was the chief guest of the state government at the event.

"He was the one who told me to start the initiative and (for the police) to arrest the (PPS) men, just after the parade which he attended, is an insult," Phee said.

Their activities have been suspended pending an emergency state executive council meeting this morning.

Lim, who is also DAP secretary-general, has defended the team, arguing that the unit was set up along the lines of the Village Development and Security Committees (JKKK) which, like the PPS, did not register with the ROS. - mk