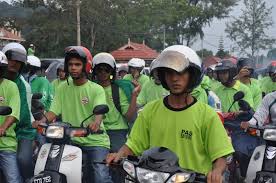 After Pengkalan Kubor, youths cause another loss for PAS in Selangor

Winners and losers in the Selangor saga...

With the swearing in of PKR deputy president Azmin Ali as the new Selangor menteri besar on Tuesday, a curtain comes down on an infamous political move for which the consequences had dragged on for more than eight months.

It was called, at the height of its popularity, the 'Kajang move'.

It was the easiest way one could coin a political manoeuvring that had such far-reaching implications.

The plan for the Kajang move was to consciously trigger the resignation of Kajang assemblyperson Lee Chin Cheh to force a by-election and then have PKR de facto leader Anwar Ibrahim contest in the seat, and if successful, become the Selangor MB.

But a 'hastened' sodomy conviction in March disqualified Anwar, and PKR had to go ahead and named his wife party president Dr Wan Azizah Wan Ismail for the state seat.

The move to replace then-Selangor MB Abdul Khalid Ibrahim had to be stalled for months following the by-election.

In July, the motions were put in place again as the friction between Abdul Khalid and his party PKR grew, and probably in an effort to ensure the Kajang move remained relevant, Wan Azizah was proposed as the new Selangor MB, triggering a prolonged crisis.

Plenty had happened in between - Abdul Khalid’s sacking from PKR, and his decision to sack six PKR and DAP excos, PAS’ refusal to support attempts to remove Khalid, PAS’ refusal to endorse Wan Azizah, the Selangor palace’s intervention in demanding several names be nominated, and the palace’s eventual decision to name Azmin as the MB.

And in the entire crisis, there are obvious winners and losers.

Having always been the second strongest man in PKR with a following of his own, Azmin had twice eyed the MB post and had been overlooked in favour of Abdul Khalid on both occasions.

There have been plenty of outspoken doubts expressed about his style of politics, which many detractors claim resembles that of an Umno politician, but the fact remains that Azmin has remained loyal to the Reformasi cause for 16 years when many of his peers had deserted the movement at the earliest available opportunity.

Azmin had played his cards right, waiting for the right moment to finally get the post, and throughout the saga continuously toed the party line until the party reluctantly endorsed him as MB at game point.

Incidences where the royalty played an intervening role in the appointment of a MB is a rarity, but the indications had been there from very early on - since Wan Azizah's name was nominated - that the palace was not keen an appointing her as MB.

The Star ran a report quoting palace sources that it did not want a 'remote control' MB.

It attributed the claim to the fact that Wan Azizah was seen as following the guidance of her husband Anwar Ibrahim even if she did become MB.

During the impasse Wan Azizah proved she had a majority in the state assembly using statutory declarations after two PAS assemblypersons threw their support behind her.

PKR and DAP insisted on sending only her name to the palace throughout the saga even though the palace had asked for at least three names to be nominated from each party.

At the end of the day, the palace called in three select candidates and interviewed them, eventually opting for Azmin Ali, who was not nominated on any of the parties' lists.

The royalty in Selangor has thus asserted its authority, and had played an active role - a decisive one - in this entire saga.

For Selangor BN, the internal strife that took place in the state for months might not have resulted in a state election. Yet, it would result in great fodder for the next general election campaign and even for many more by-elections in the near future.

Apart from that, the lack of cohesion within Pakatan had kept the crisis simmering for so many months that BN escaped scrutiny concerted public campaigns against pressing national issues such as the Goods and Services Tax (GST), which now only has six months left before implementation, and the indiscriminate use of the Sedition Act to silence political opponents.

The former Selangor MB will divide opinions. There is no doubt he did his own legacy some harm by refusing to resign as MB when his party asked him to, even after he was sacked from his party.

But Abdul Khalid had anyway decided to end his political career the moment he was no longer in the state administration, and as such, stayed on in his post for as long as he could.

It is possible now that he may get another opportunity to administer, maybe not as a politician as a result of this crisis and the new friends he had made along the way.

Abdul Khalid’s ability to maintain silence when his critics were busy parroting his alleged wrongdoings, and to always remain professional, had won him a few supporters on its own.

The fact that his biggest detractor Azmin did not openly criticise him during the crisis or after replacing him as MB goes to show that he had retained a level of respect that even PKR de facto leader Anwar Ibrahim insisted must be maintained.

But despite that, his ultimate goal to complete two terms as MB did not become a reality. He lost and gained nothing.

Over the past couple of months, they have been extremely vocal in endorsing Wan Azizah, criticising PAS, and being critical subtly of their own party members who were making other overtures.

The fact that Wan Azizah did not become MB had basically rendered the Kajang by-election and eight months of imbroglio worthless.

Dating back to the Kajang Move, these two individuals had become the 'face' of PKR, speaking on behalf of the party, and contributing to divisions in the party. Their strong rebukes against Pakatan Rakyat partner, PAS, in this crisis, would not help mend ties when the crisis settles down.

The two also combined to form a team during the PKR party polls, which itself dragged on for months after being fraught with allegations of money politics.

Saifuddin was only running third in the deputy president race behind Azmin and former Selangor MB Abdul Khalid Ibrahim until the latter was sacked from the party, and their obvious attempts to put forth an alternative force in the party had failed.

PAS president Abdul Hadi Awang had become the pantomime villain over the past couple of months in the eyes of Pakatan Rakyat supporters, thanks to his handling of the MB crisis.

Hadi had acted on his own, overriding the party’s central committee decision and working with the syura council to make veto decisions that threatened the basic understanding within Pakatan.

He also opened fire against his own two party assemblypersons who had supported Wan Azizah with their statutory declarations, calling them "lackeys" at the PAS muktamar recently. This name-calling was something that did not gel well with many PAS grassroots.

Hadi’s actions have not only left huge gaps in Pakatan, but also left huge cracks within PAS. The faction aligned to him became increasingly vocal in backing Abdul Khalid as MB even after the latter was sacked by PKR, and in criticising PKR de facto leader Anwar Ibrahim among others.

Throughout the months, Hadi never physically appeared alongside other Pakatan leaders and almost exclusively acted on his own, designating deputy president Mohamad Sabu to be the face of the party in Pakatan.

His criticism of PKR president Wan Azizah is likely to widen the rift both within Pakatan and PAS itself, and there have been calls for him to apologise and also to resign.

The MB crisis might also end up costing PAS plenty of votes in the next general election, especially among the non-Muslim voters, and the party’s progressive faction are likely to suffer the most in terms of votes in the mixed and urban areas.

In the course of the saga, a leaked chat message in a PAS Whatsapp group also showed how strong the divisions within PAS was, confirming the existence of a faction with radical and religious outlook that is increasingly vocal. It was the undoing of the years PAS had spent to portray the image of a moderate, yet Islamic, party.

When the Kajang move was announced early this year, PKR said it was making Selangor the 'launchpad' to Pakatan taking over Putrajaya.

However what happened in the next eight months has only set the party back. Relationships within Pakatan Rakyat are now broken and bridges burnt, and it will a formidable challenge in itself if Pakatan could present the same united force it presented in the 13th general election.

With that united force proving insufficient to unseat the federal government in Putrajaya, and after promising to try harder for GE14, PKR and Pakatan now look to have spent an awfully long time mending a crisis of their own making instead of venturing into new territory.

PKR is now stuck in a precarious position. Their de facto leader Anwar has an impending jail sentence hovering above him, that rendered him unable to contest as party president as well.

With the deputy president Azmin as Selangor MB he would now be strong enough to make a challenge for the party presidency eventually.

The open war of factions that has surfaced in the PKR party polls showed the divide within the party. A section of the party is trying to move away from the legacy of Anwar alone, while another wants to keep promoting Anwar’s legacy in the party.

The party is stuck at a new crossroad. By the time it mends relationships internally and within Pakatan, it may not be able to better its  GE13 performance.

And as for Anwar, with his increasing age and the increasing party infighting, chances for one of the country’s most charismatic politicians to clinch the prime minister’s post continues to shrink despite his decision to defer his retirement from politics post-GE13.

He is no longer seen as the ultimate element driving Pakatan, more so by many PAS members. Once upon a time, he was that glue that could bring Pakatan together, but he no longer seems to command that all-round respect and loyalty.

The MB crisis has dragged for months due to his inability to bring all parties to the negotiation table like how he had done before.

The loose Pakatan coalition and PKR’s strengths are in tatters following this crisis. With Anwar having a looming court battle to worry about, chances are there will not be a magic solution to make things better for the opposition any time soon.- mk