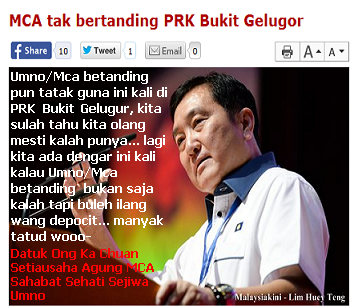 The DAP today laid to rest all speculation and confirmed Ramkarpal Singh as the candidate for Bukit  Gelugor.

Ramkarpal, 38, a lawyer by profession, is the third son of the late Karpal Singh, the former Bukit Gelugor MP, who died in a tragic car crash near Gua Tempurung, Perak along the North-South Highway on April 17.

Karpal, who was then the party's national chairperson, had won the seat three times since 2004.

Ramkarpal will be contesting against Parti Cinta Malaysia vice-president Huan Cheng Guan and independent candidates Yacoob Mohd Noor and Mohamed Nabi Bux, all of  whom have announced their candidacy.

Mohamed Nabi, who claims to be a PAS member from Selangor, said he wants to contest regardless of whether his party, that appears to be in the dark over his move, supports it.

The yet-to-be registered Penang Front Party, a coalition of 44 groups that has declared war on the DAP and said it will run for the seat, has yet to name its candidate.

MCA, who contested for the urban seat in the May 5 general elections last year, is still mulling whether or not to do so again.

Nomination day is Monday at the Dewan Sri Penang, while polling is on May 25.

There are 17 polling centres and 139 channels for ordinary voting and four for early balloting.

As at April 17, the parliamentary seat covering 28sq km - comprising the state seats of Paya Terubong, Air  Itam and Seri Delima, all held by the DAP - has a total of 82,431 registered voters.

In his maiden speech as a candidate, Ramkarpal said he hopes, with the support of everyone, DAP can win the seat with a bigger majority.

He thanked all his supporters and the DAP for giving him an opportunity to contest the Bukit Gelugor seat, left vacant by his father's untimely death.

"I want to particularly thank all those who work behind the scenes, especially state DAP secretary Lim Hooi Ying, for making this moment possible," he said.

Ramkarpal, together with other DAP leaders, subsequently launched the operations centre by releasing dozens of balloons.

They later celebrated Karpal's wife, Gurmit Kaur's birthday, by cutting a cake and blowing of candles.

During his announcement speech, Guan Eng said Ramkarpal was the best candidate and “he happens to be Karpal's son”.

"We hope he will show the Bukit Gelugor people that he is a worthy member of parliament," Guan Eng.

Earlier, Lim told the expectant crowd: "We are Penang people, even if you beat us, we won't die - true or not?"

He said BN will play dirty, and up to now the coalition has yet to reveal whether it will contest the seat.

"We know they will surely put up a candidate. They are playing, but we are informing everyone that we are not ... main-main," he said.

"This is a battle we must win and win convincingly, but it will not be easy," he added.

"Karpal used to say, the fight is as important as the outcome. We must do our best in this battle.”- mk

Just hours after DAP announced Ramkarpal Singh as its candidate for the Bukit Gelugor by-election, MCA resolved not to contest the seat.

MCA secretary-general Ong Ka Chuan was reported in Sin Chew Daily's SMS saying MCA will not participate in the poll as the party wants to focus on the hudud issue instead.

After days of dragging its feet over whether to join the fray in the DAP stronghold, the decision was finally made at an emergency presidential council meeting in Ipoh today, the Chinese daily reported.

The by-election was triggered  by the tragic death ofincumbent MP Karpal Singh died in a road accident last month, leaving the seat vacant.

His third son, Ramkarpal, has been picked by DAP to defend the seat.

Nomination day is Monday at the Dewan Sri Pinang, while polling is on May 25.- mk

An international team of investigators sent to Kuala Lumpur to assist investigations when the MAS flight MH370 first disappeared had initially sat idly with nothing to do, claimed a US report.

“The Malaysians stuck them in a hotel room and didn't give them anything (to work on).

The report published online today also quoted an unnamed NTSB official saying that relations with Malaysian officials eventually improved “once they finally figured out their national reputation was at stake”.

Goglia described the Malaysian response to the MH370 incident as “a mess” that took weeks to start following international procedures on airplane mishaps.

This included the International Civil Aviation Organisation’s (ICAO) guidelines stating that Malaysia should assemble a team of international experts "who work as equals" to investigate.

"They didn't follow well-established international procedures from the very beginning, and it took weeks before they started to. And that got them off on the wrong foot," he told the magazine.

Goglia also noted that many aspects of the investigation that are needed remain obscure.

"While Malaysian authorities claim to have conducted extensive interviews, the details are still secret - as is much else surrounding the mystery of MH370," concluded the magazine.

The NTSB and the US Federal Aviation Authority (FAA) are amongst the groups contributing their expertise to the investigation in their capacity as representatives of the country that designed and manufactured the aircraft, the USA.

Boeing is also a part of the investigation serving as an adviser to the NTSB and FAA.- mk