“I think this kind of mindset is incorrect. You are racing to the bottom (by) comparing to the worst case. We already have a precedential case. You can learn a lot of lessons from it.

“However, you didn't. But right now you compare with it and say we did better. I don’t think this kind of comment is good,” he said.

He was responding to the fact that Malaysia took four hours for Malaysia to notify the Kuala Lumpur Air Rescue Coordination Centre (ARCC) that MH370 is could not be contacted, and Acting Transport Minister Hishammuddin Hussein’s (left) rebuttal that it took six to seven hours in the case of AF447.

The minister added that the circumstances in each case is different, and it is up to MH370's international investigation team to determine whether the four-hour delay is acceptable.

AF447 had gone missing while flying over the Atlantic Ocean in 2009, and most of its wreckage including its black box was not found until 2011.

MH370 went missing on March 8 this year and is yet to be found.

Lam pointed out that French Bureau of Enquiry and Analysis for Civil Aviation Safety (BEA) investigation report on AF447 had highlighted poor coordination between French, Brazilian and Senegalese authorities as one of the reasons for the delay in ARCCs of an emergency.

Among other problems, Brazilian and Senegalese air traffic controllers spent hours contacting each other about AF447’s location and estimated arrival times, without even contacting Air France’s operations centre.

Eventually - two hours and 45 minutes after last communications with AF447 - another Air France flight passing through the same area, informed the operations centre of a possible problem.

It was 6 hours and 30 minutes since last contact with AF447 before an alert was first alert was sent to rescuers, and nine hours and 29 minutes before the first search aircraft took off, partly due to the lack of a joint SAR protocols between Brazil and Senegal on contrary to the International Civil Aviation Organisation’s (ICAO) regulations.

“In my opinion, I don’t think the Malaysian government took note of the incident and recommendations made by the BEA (on how to avoid repeating the mistakes),” he said.

He believes this is why Hishammuddin thought Malaysia had performed better than the handling of the AF447 incident.

As a signatory to the Chicago Convention on International Civil Aviation, he said Malaysia should have abided by ICAO’s protocols on emergency response.

He said it required the ARCC to be notified in 30 minutes of losing contact with MH370, to go on ‘Alert’ in 60 minutes if further attempts fail to reach the aircraft, and finally escalate to the ‘Distress’ phase of emergency response if more attempts also fail.

In addition, the senior fellow at the DAP-linked think tank Refsa also raised questions on the military’s protocols, and queried why the air force did not respond to an unidentified aircraft flying across Peninsular Malaysia and towards the Andaman Sea.

Shortly after MH370 disappeared from civilian radar and was diverted from its original flight path, military radar tracked it as an unidentified aircraft flying from off the coast of Penang until it left radar coverage over the Andaman Sea.

Lam (left) said he does not know the military’s procedures, which are usually kept secret. However, the ICAO has guidelines on how to deal with unidentified or stray aircraft.

These procedures are laid out in ICAO Document 4444 (Air Traffic Management), he said, and includes attempting to contact such aircraft and alerting military authorities.

“Since the 9/11 incident, air forces all over the world learnt lessons from it. They continuously did a lot of drills and exercises on how to intercept stray or unidentified aircraft also,” he added, referring to the terrorist attack in New York and other places in the US on Sept 11, 2001, involving hijacked aircraft.

One notable example of a stray airliner being intercepted was the Helios Airways Flight 522 incident in 2005, where a Boeing 737-300 aircraft flew off-course and did not respond to attempts to contact it.

He said two Hellenic Air Force fighters were scrambled to investigate the Helios flight, and saw that the co-pilot was unconscious, the captain was missing, a person was waving at the fighter pilots from the cockpit, and oxygen masks had been deployed. It crashed 30 minutes later after running out of fuel.

“So the question arises,” said Lam, "Did ATC (air traffic control) or MAS conformed to this particular provision? Did they do it?

Previously, when questioned on why MH370 was not intercepted although its identity could not be ascertained at the time, Prime Minister Najib Abdul Razak replied that air defence officers were certain that the aircraft was not hostile.

This was because although the identity of the aircraft was unknown, it behaved like a commercial airliner, he said. - mk

Barack Obama has come and gone but Malaysians are still arguing over who won and who lost from the first state visit here by a US president in nearly half a century.

The obvious winners are Obama himself and his host, Prime Minister Datuk Seri Najib Razak, while the obvious losers are Datin Seri Rosmah Mansor and Tun Dr Mahathir Mohamad.

The jury is still out whether Opposition Leader Datuk Seri Anwar Ibrahim gained or lost from the president's failure to meet him.

Obama may not have won an overt endorsement of his Trans-Pacific Partnership Agreement from Najib, but he got Malaysia to back the US in its "Pivot to Asia" doctrine.

Malaysia gave him a right royal welcome when he arrived two Saturdays ago.

The president was greeted with a 21-gun salute, a guard of honour and a military band which played The Star-Spangled Banner and the Negaraku, not once but twice.

The Yang di-Pertuan Agong feted Obama to a state banquet at the Istana Negara where he was welcomed by the blaring of trumpets.

Trumpets did not blare for Najib, but Umno mouthpiece Utusan Malaysia trumpeted the prime minister as the big winner in the historic 3D/2N visit by Obama.

He burnished his image as "a friend and a partner" of the US and was even described as a reformer by Obama.

Let's not forget the photograph that Najib took with his guest and immediately tweeted: "My selfie with President Obama!"

On top of that, Najib got a ride with Obama in The Beast, the heavily armoured presidential state car.

To cap it all, Obama did not meet with Anwar and the fact was hailed as a major victory.

Najib's "first lady" Rosmah, though, didn't get to cavort with US First Lady Michelle, who skipped her husband's four-nation tour of Japan, South Korea, Malaysia and The Philippines.

An even bigger loser was Mahathir, who did not figure at all in Obama's itinerary here.

The erstwhile prime minister's best moments with a US president were in 2002 when he met George Bush in the White House. 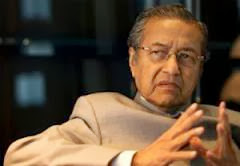 That came at a cost to Malaysian taxpayers of at least RM5.3 million paid to Washington lobbyists through the Heritage Foundation, a right-wing think tank, as revealed by The Washington Post.

Deputy Prime Minister Tan Sri Muhyiddin Yassin is another loser. All and sundry except Obama seemed to be asking where he was. He was, like Mahathir, kept out of the show. Period.

Right after Air Force One took off from Subang, he responded to Obama's statement that non-Muslims must be accorded equal opportunities in order for Malaysia to progress.

A visibly miffed Zahid said the Malaysian government had been "fair to all religions".

Obama recognised Hishammuddin, Malaysia's face to the world in the search for MH370, and talked to him the longest when the president walked down the line of dignitaries at Parliament Square.

Hishammuddin, the acting transport minister, said Obama assured him: "I know it is a tough, long road ahead. We'll work together. There is always support."

As minister-in-attendance to the president, Khairy was among the first Malaysians to welcome Obama and the last to bid him "selamat jalan". One wonders if the Umno Youth chief has descended from the stratosphere.

Anwar may not have been accorded a face-to-face meeting with the president, but at least he got to meet White House national security advisor Susan Rice.

However, 10 of his allies, backers and sympathisers were invited to a private hearing with the president at the Ritz-Carlton.

Among these winners were Datuk Ambiga Sreenevasan, who represented the Malaysian Human Rights Society (Hakam), Maria Chin Abdullah, chairman of Bersih 2.0, and Christopher Leong, president of the Bar Council.

The others were Dr Ahmad Farouk Musa, chairman of the Islamic Renaissance Front (IRF), Honey Tan, who represented the Coalition of Malaysian NGOs (Comango), Tan Sri Hasmy Agam of the Malaysian Human Rights Commission (Suhakam), Ratna Osman of Sisters in Islam, and Aegile Fernandez of Tenaganita.

Masjid Negara's chief imam Tan Sri Syaikh Ismail Muhammad would have been considered a winner too after hosting Obama at the national mosque. 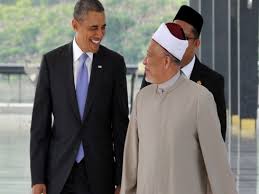 Alas, the president used the taboo word when he replied "Insya Allah" after the cleric urged him to use his influence against the oppression of Muslims worldwide.

An unexpected winner was a reporter from The Star, Christine Cheah.

She came face to face with Obama when the president met young leaders from South-east Asia at Universiti Malaya, asked for a hug and actually got it.

Selangor Menteri Besar Abdul Khalid Ibrahim has denied reports of him declaring support for the goods and services tax (GST).

In a statement on Facebook today, Khalid said his remark was "misinterpreted" by the media.

"I clearly said that implementation of GST can only be done if the Gini-coefficient is less than 4.5.

"Until the federal government address the issue of income equality, GST implementation must be deferred," Khalid (right) said.

The MB's stand also matches that of Pakatan Rakyat.

He was responding to a Bernama report under the headline "Selangor MB declares support for GST".

Bernama quoted Khalid as saying: "It is not yet the time to implement the GST, because income is not equally distributed. As such, when the tax is imposed, the lower-income group will be burdened"

Some 50,000 people protested against GST at Dataran Merdeka on May 1.

The GST which was passed in Parliament last month will come into effect in April next year at a rate of 6 percent. - mk