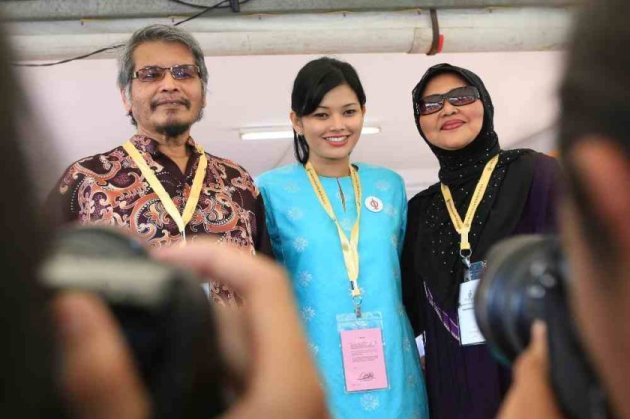 Peppered with liberal doses of sarcasm, Yammy Samat said her daughter turned out more like Mahathir’s daughter Marina, a social activist whose views often contradict that of her father's.

"I tried teaching her to be like Mukhriz, but when she grew up she became like Marina (left)," she was quoted as saying by Astro Awani.

Furthermore, Yammy, a long-term Umno member, said that she has given her daughter the freedom to choose between right and wrong.

"She is a grown up and can think for herself," she added when met on the campaign trail with Dyana, who is the DAP candidate for the Teluk Intan by-election.

'She can even choose her husband'

Yesterday, Mahathir expressed disappointment that DAP was fielding someone who hails from an Umno family.

Describing the Chinese-dominated party's decision to put a Malay candidate as window dressing, the ex-Umno president, however, advised party members on how to prevent their children from turning their backs on Umno.

"As parents, Umno members should tell their children about Umno, it's history and what it has done (for the country and people).

"Otherwise, when they grow up, they will do as they please," he had said.

Meanwhile, Yammy also said that she has given Dyana the freedom of choosing her husband, what more the party of her choice.

"If I force her and if the marriage ends in failure, what then?" she added.

Yammy also said she was not concerned about Dyana joining DAP as the party does not only consist of Chinese and is certain that her daughter's faith in Islam will not be shaken.- mk

Why is Dyana Sofya a threat to UMNO...

It is just supposed to be a parliamentary by-election but the battle for Teluk Intan is now between Dyana Sofya Mohd Daud (pic) and Umno, which appears to be rattled by her candidacy on a DAP ticket.

She has apparently struck fear in several Umno leaders, from Tun Dr Mahathir Mohamad to Wanita Umno chief Datuk Seri Shahrizat Abdul Jalil  – who have all castigated the political novice for not joining Umno.

Even Perkasa president Datuk Ibrahim Ali has thrown his soiled fingers into the fray, urging Gerakan to use a photograph of him together with the 27-year-old DAP candidate as campaign fodder.

But Gerakan has refused to use the photograph as part of the campaign by their president Datuk Mah Siew Keong, the Barisan Nasional (BN) candidate for the May 31 by-election.

So why is Umno so afraid of the young UiTM law graduate, whose mother is an Umno member? Several reasons come to mind.

One. Dyana Sofya's candidacy on a DAP ticket shows that Umno is not the only party for Malays, apart from PKR or PAS. Particularly when more Malaysians are seeing themselves as Malaysians and not identifying themselves along racial lines.

As more of that happens, Umno and other race-based parties and even groups like Perkasa will have fewer members and cease to exist or even be relevant in Malaysia.

Dr Mahathir, Shahrizat and even Ibrahim can't allow this to happen because this will be the end of Umno and its dominance in Malaysian politics.

Two. Dr Mahathir is right, the younger generation have forgotten the hard work of the early Umno members and leaders. Perhaps that is because the old Umno was de-registered under his watch.

The Umno today is Umno Baru, a pale shadow of the Umno of Tunku Abdul Rahman and Tun Abdul Razak Hussein that fought for Malaya's independence in 1957. The Umno today believes in keeping everything for itself, and only sharing the crumbs with others.

And every day, Umno gives Malaysians a reason to detest them. Every day.

Three. Dyana Sofya's candidacy shows that there are political parties out there willing to gamble on youth and idealism rather than just rely on the tried and tested or the experienced politician.

There isn't much of a queue in DAP unlike BN parties where party presidents and top officials are favoured as candidates over younger members. Perhaps it is also the fact that young talent have deserted the BN component parties.

Malaysia's future belongs to Dyana Sofya's generation, not the ones who have already tasted power and want to keep it for a while more.

Four. Dyana Sofya's candidacy shows that young graduates, even from local varsities, such as UiTM, have the intelligence, mettle and leadership skills to strike their own path instead of following what their parents want them to do.

These young Malaysians can think and know they can make the difference. They are hungry and they don't want to bide their time.

If anything, this mindset is the anti-thesis of a typical BN member who does what he or she is told and waits patiently in line for a shot at political office.

Only some, especially those in the inner circle, make it in BN. That might not be the case in DAP or other PR parties which have had to put up young candidates due to the lack of those willing to run for political office.

If more Malaysians, especially Malays, follow Dyana Sofya's footsteps, then a party like Umno will come to an untimely end.

Umno cannot allow that to happen and it has to demonise, castigate, heckle and humiliate Dyana Sofya so that others will not follow her footsteps and join parties willing to take a chance on them.

Her success and victory in Teluk Intan will be more than just DAP keeping a seat in parliament or another young Malay becoming a DAP MP. It also means that Umno cannot assert itself as the only platform for the Malays to keep power or run Malaysia.

That is the sad state of Umno these days, that it has to fight a young woman just to keep power. – tmi