With all the brouhaha,will Anwar be allowed to debate.... 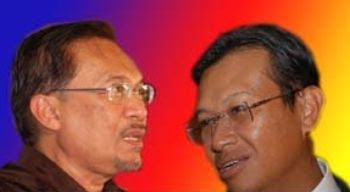 After all the brouhaha,created by the police and mending roadblocks around Parliament in anticipation of a 'rally' cooked up from some unknown sources, as the Home Minister Syed Hamid Albar claimed it came thru SMS,blogs posting etc...etc...., the people are quite sceptical as to whether the debate on the hike of petroleum prices will ever take place.

Syed Hamid Albar said that the credible information on the alleged meeting was from an insider and tip-offs from text-messages and blog-posts.

“I did not say that we shouldn't act on SMSes. We had used this during the election (campaign). We have to act on all sorts of things, the police cannot wait for events to happen. The police must make sure that public order is maintained and they have done that.

Btw.the so called insider and those SMS messages and blog posting were probably the work of the gomen and the UMNO goons themselves. This is another UMNO's smokescreen tactic to derail Anwar from making a political comeback.

Yesterday Anwar Ibrahim had defied the police order under Section 111 of the Criminal Procedure Code (CPC) to request him to report to the police today at 2pm to take a statement in respect of an alleged report of sodomy. Anwar claimed that his workers and family members were intimidate by the police. Read Anwar's letter here.

After what happened yesterday BN looks afraid of having this 'live' debate since it may show the rakyat on how Pat Lah's gomen had been managing and plundering our natural resources.

The court order that allow the police to arrest on sight if Anwar is spotted within five kilometres of Parliament is still in force. Will he be arrested before or after the debate for breaching the court order? Its anyone guess..........

Let the truth prevails and see who is actually telling lies. Read here, here and here.