Was Pat Lah really awake when he okayed the Mercedes purchase......... 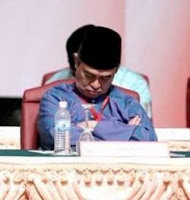 Terengganu MB Ahmad Said said that Pat Lah has approved the state government's use of the luxury cars in place of Proton Perdana V6 Executive cars. He said that he explained to Pat Lah on the need to replace the Proton executive cars and obtained Abdullah's blessings for the change.

Speaking to reporters in Kuala Terengganu today, Ahmad said he had a cordial meeting with both Pat Lah and Najib Abdul Razak yesterday.

"We reached a consensus on the matter during the meeting at PWTC. The matter has been solved," he said.

In another development, Pat Lah said he spoke to Terengganu MB Ahmad Said at the PWTC yesterday and advised him against using the 14 Mercedes-Benz E200 Kompressor for state exco members.

"This is an important matter and the cabinet decided that the cars shouldn't be used by the excos. That is what we have decided although they may feel it is their right to get the cars.

"It is very clear. But since the cars are already purchased and if we were to sell them now, it would be at a loss. It is better to use them for guests of the state although they were initially bought for the excos," he added.

So you see,whether Pat Lah was awake when he said OK on the purchase of the Mercedes. If he was fully awake he shouldnt had make such a blunder. Btw. can the Terengganu gomen purchase those new cars without first getting the approval of the Treasury?

So Pat Lah thought that buying 14 Mercedes E 200 Kompressor for RM 3.43 million is cheaper than buying 14 new Perdanas, because the Terengganu MB had conned Pat Lah into believing that maintenance cost for these Mercedes will be much cheaper. Thats what they think so.........

Knowing that he sudah kena kantoi,Pat Lah says can buylah but exco cannot use......but only for guest. Who are the guests? Mohd.Taib,Adnan Mansor,Khairy Jamaluddin or Patrick Lim.......

Is Pat Lah punishing the excos for not supporting his chosen MB candidate,Idris Jusoh? But Idris Jusoh was detested by the Sultan. Make your own assumption............. While the rumour mills keeps spinning, read here and here.