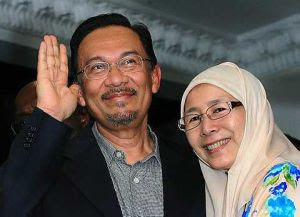 Anwar Ibrahim today announced that he will contest a by-election in Permatang Pauh, which will be vacated by his wife, party leader Dr Wan Azizah Wan Ismail.

Wan Azizah told a packed press conference this afternoon that she will be resigning her position as member of parliament for the seat but will retain her post as PKR president.

"I have submitted my resignation letter to House speaker today," she said.

Dr Wan Azizah also thanked her supporters in Permatang Pauh who had stood by her in the most difficult of times.

"Anwar Ibrahim has the experience and intelligence to reinvigorate our economy, and the charisma and integrity to unite Malaysians.

"And I'm not saying this just because he is my husband," she added 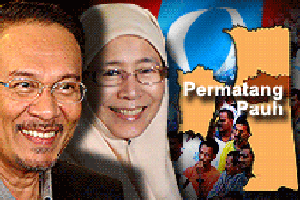 Anwar, who is seeking a parliamentary comeback after an absence of 10 years, has been shopping for a seat to contest after the expiry of a five-year ban from active politics.

Anwar, is currently under a police investigation for sodomy involving Saiful Bukhari Azlan, 23, a former aide. Anwar had previously said he would contest in the Kulim-Bandar Baharu parliamentary constituency, where an election petition is pending. The case is scheduled for hearing on Aug 19 and is uncertain until when will the case prolong.

The Election Commission is required under the law to call for a by-election within 60 days. Its chairman Tan Sri Abdul Rashid Abdul Rahman said the Commission would start preparing for the by-election upon receiving notice by the Speaker. Read here.

Hopefully the gomen doesnt arrest him before nomination day.......

Hello !.
You may , perhaps curious to know how one can make real money .
There is no initial capital needed You may begin earning with as small sum of money as 20-100 dollars.

AimTrust is what you need
AimTrust represents an offshore structure with advanced asset management technologies in production and delivery of pipes for oil and gas.

It is based in Panama with affiliates around the world.
Do you want to become really rich in short time?
That`s your chance That`s what you desire!

I feel good, I began to get income with the help of this company,
and I invite you to do the same. It`s all about how to select a correct companion who uses your funds in a right way - that`s AimTrust!.
I make 2G daily, and my first investment was 500 dollars only!
It`s easy to start , just click this link http://izofigoquv.kogaryu.com/ukabup.html
and go! Let`s take this option together to feel the smell of real money

Hello everyone!
I would like to burn a theme at here. There is such a thing, called HYIP, or High Yield Investment Program. It reminds of ponzy-like structure, but in rare cases one may happen to meet a company that really pays up to 2% daily not on invested money, but from real profits.

For quite a long time, I make money with the help of these programs.
I'm with no money problems now, but there are heights that must be conquered . I get now up to 2G a day , and my first investment was 500 dollars only.
Right now, I'm very close at catching at last a guaranteed variant to make a sharp rise . Turn to my web site to get additional info.

First time long time! wanted to inform you everyone a tip on how you can save some money monthly, Getting a conversion
kit for your vehicle will save you hundreds of dollars on gas by switch to an american made fuel 'Ethonal'.
More americans are upgrading their vehicles to support both fuel types and buying ethonal to fill up your vehicle.
Ethonal is not only an American made fuel, which you'll be support our economy alot more than buying fuel
that we have to import making us more depended on foreign supplies.
Run your vehicle on a [url=http://www.e85converterkits.biz]e85 Conversion kit[/url]