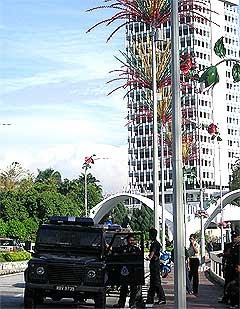 Police have put up road blocks in the capital as they brace for protests ahead of a possible debate of no confidence in Prime Minister Abdullah Ahmad Badawi tomorrow. The opposition called on Friday for the debate after Abdullah said he would remain in office until mid-2010 despite his party's drubbing in March elections.

The parliament speaker will decide on Monday whether to allow the debate to go ahead.

Police said several roads leading to the parliament building would be sealed off tomorrow and urged people not to protest, although the Keadilan opposition party denied Sunday it had called for any demonstrations. All police leave has also been cancelled.

"The government is paranoid. We just called our supporters to witness the debate, but authorities think it will be a mass gathering. There is no need for the roadblocks," said information chief Tian Chua. Tian also said opposition leader Anwar Ibrahim was today banned from going anywhere close to parliament. 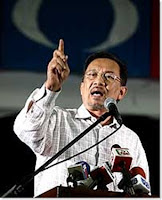 Anwar has earlier expressed the intention to go to Parliament to hear the no-confidence debate.

"Police came to Anwar's home today and presented the court order restricting him from going near parliament on Monday. If Anwar breaches the order, he could be arrested and charged in court," he told AFP.

The court order will allow the police to arrest on sight if Anwar and opposition supporters are spotted within five kilometres of Parliament. 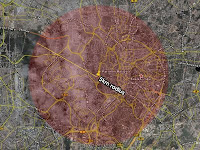 Its only a vote of no confidence filed by Pakatan Rakyat, and there is a possibility that the House speaker could shoot down the opposition Pakatan Rakyat's motion for the debate which was filed last Friday. With the police in full force around Parliament and a court order preventing Anwar and the rakyat to witness the motion, I am wondering whether this is Malaysia or Zimbawe? Its Sunday are the magistrates court open? Has the gomen of Pat Lah gone nuts...........read here,and here.

Now you all understand why the gomen will do anything to stop Anwar near the august house......

According to the House speaker, the debate on the oil price hike filed by Domestic Trade and Consumer Affairs Minister Shahrir Abdul Samad on June 23 was a no-confidence motion.In that motion, the government won with a vote of 129 against 78.

At noon, Wan Azizah stood up in the Dewan Rakyat to ask the House speaker to reconsider his decision against allowing the no-confidence debate. Pandikar refused to entertain the request, leading to the hall erupting into pandemonium.

All Pakatan MPs subsequently staged a walk-out, accompanied by calls of ‘balik kampung’ from their BN colleagues. - Malaysiakini.
Posted by ali allah ditta at 1:00:00 AM

Letting the time pass me by said...

I thought it was Anwar who is paranoid and seek a refuge at the Turkey embassy?

What is with the uturn?