I am damn pissed off with the whole situation and loss for words.I am in no mood of writing either.....f**k the gomen,polis and those conspirators and let them burn in hell...... 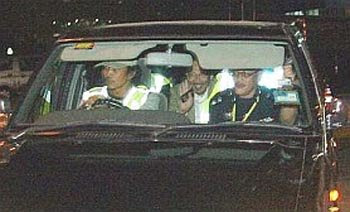 However, here's an extract from Nurul Izzah Anwar blog........

Dad was arrested by the cops whilst on his way to the IPK to give his statement. The cops gave till 2pm for dad to report but still arrested him before the deadline. Dad was on his way back home to have lunch in Bukit Segambut, and then head to the IPK but the cops blocked off the road and arrested him like a criminal. And the cops who arrested him were Special Squad cops with balaclavas!!! Is that necessary!!!

I hope and pray for our nation today. I ask all Malaysians to be calm but strong in this event. I truly do believe our nation’s future rests on what happens in the next weeks.

Please please do not give the authorities any reason to crack down on us. Let us do everything by the book and do what’s right.

And most of all, please pray.

Update - Now I hear Raja Petra is going to be arrested as well!

To the family members be strong,the whole country is praying for his safety. Read here , here. & here .

This afternoon at 1:05 PM Datuk Seri Anwar Ibrahim, former Deputy Prime Minister of Malaysia, was arrested outside of his home in Kuala Lumpur.

He was due to issue a statement at IPK KL (Kuala Lumpur Police Contingent Headquarters) at 2:00 PM based on an agreement reached with the police on Tuesday.

Datuk Seri Anwar Ibrahim was returning from the Anti Corruption Agency to his home after giving a statement pertaining to the police report that has been filed regarding suppression of material facts in the case involving him in 1998. He was accompanied by his senior legal team, staff, and security.

As he entered the neighborhood of his home, a contingent of ten police cars, half unmarked and half patrol, forced the two cars in Anwar Ibrahim’s entourage to stop.

There was a contingent of 20 balaclava-clad masked commandos (UTK) who accosted him, reminiscent of the forces sent to arrest Anwar Ibrahim at his home in September 1998.

An officer approached Anwar Ibrahim and demanded that he accompany the police in an unmarked vehicle to the Kuala Lumpur Police Contingent Headquarters.

His lawyers were not permitted to travel with him to the police station.

This arrest has taken place less than fifteen hours after Anwar Ibrahim appeared live on Malaysian television for the first time since 1998, and announced to millions of viewers his intention to stand for election, and upon the formation of a new government, to lower the domestic price of fuel by 50 sen.

The overwhelming majority of Malaysians expressed their support of his televised statement.

These events are deeply disturbing to us and indicate that this entire episode is a repeat of the actions taken against Anwar Ibrahim in 1998.

During the last few weeks the government owned mainstream media has demonized and vilified him.

His staff has been harassed and we see a conspiracy being hatched to thwart the political change that is imminent in Malaysia.

Under no circumstances will the people of Malaysia and the international community tolerate any harm coming to Anwar Ibrahim.

We remind Prime Minister Abdullah Badawi of the promise he made to ensure Anwar Ibrahim’s protection.

We have been able to communicate with Anwar Ibrahim, who calls upon his supporters and the people of Malaysia to remain calm and to reject any attempts at provocation, which will give a pretext for an emergency situation to be declared.

OFFICE OF ANWAR IBRAHIM
Posted by ali allah ditta at 2:15:00 AM

The police detained DSAI in the police cells because they want to take his hair samples that may have fallen while he was asleep and say that they were found in the condo. Can someone warn DSAI of that NOW and also his lawyers about it? Do it now and now.