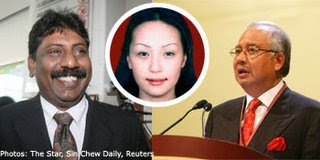 A Malaysian detective retracted on Friday allegations he made linking Deputy Prime Minister Najib Razak to the brutal murder of a Mongolian woman amid a flurry of political scandals to grip the country.The retraction came after Najib denied again on Thursday that he had ever met the victim, Altantuya Shaariibuu. One of his top political advisers, Abdul Razak Baginda, is being tried on charges of abetting the murder of the woman, who was shot in the head twice and her body blown up with explosives in 2006.

Najib denied he ever had a sexual relationship with her, or had conspired to cover up her murder, allegations made on Thursday by P. Balasubramaniam, a private detective who was working for Abdul Razak at the time of the murder. Balasubramanian issued a legal deposition on Friday saying he was retracting "the entire contents" of his earlier statement, which was made "under duress" The flurry of accusations and denials are stemming from a high-stakes battle for power in Malaysia, featuring mud-flying allegations about sex, lies, murder and sodomy.-Reuters
----------------------------
Lets take a step back and see the big picture....

1. Balasubramaniam comes out with a SD that ties in Najib to Altantuya and accused Najib to be sexually involved with Mongolian hottie.

2. Balasubramaniam comes out later and retracts the part which links Najib to Altantuya and claims the earlier SD was made under duress,but never mention by whom,but probably implying the opposition camp.

3. Balasubramaniam has a choice not to make the SD in the first place if he thinks its life threatening. But to say that he made it under duress is ludicrous coz the folks in the oppositions are not in a position of power or got that money to exercise that sort of pressure on or pay him "wang ehsan" for his services.

4. The more likely story is that Balasubramaniam was forced to make the retraction under duress by Najib and his goons. Najib, the AG and the IGP are the ones with the power and means to excercise the duress on him. They even have the loot to pay so that Balasubramaniam can live happily for 3 generations.

5. By virtue of the position they hold, can they be trusted to be impartial? The Balasubramaniam episode warrants what power and arrogance can do to the ordinary folks. If Balasubramaniam refused to retract, he will lose his PI licence, his family will be in danger,the children will be denied scholarships and so on..... In all life will be a miserable one for him. What choice Balasubramaniam has then?

6.The poor Mongolian girl just "mati katak". The court drama is well scripted while the actors played their roles to confuse the audience, ultimately they want to audience to believe that there are no substantial evidences for them to proceed further.In the end the culprits will be holidaying in Hawaii instead of Sungai Buloh. Read here and here. Is this perjury?

Sex and the C4

Sodomy is a useful word
recently said and heard,
in Malaysian homes and offices
it’s all about famous orifices.
What is going on, you wonder
when Bala steals the thunder,
finger pointing the magic word
to the delight of a horny herd
Organs united, names forgotten?
VIPs are really rotten
Saifool he knows and did not know
doubts about Aminah begin to grow
of whose loose lips he was afraid
but liked her other end instead;
of course he knew it wasn't right
but it felt so good and tight!
You could not hump like Greeks
the Hindenburg’s fat cheeks;
what her hubby found so succulent
was making Rosmah trucculent.
And so she thought, the time was due
for a nice Mongolian barbecue.
Enter the analyst, not so anal,
who found the girl too banal;
fearing supernatural harm
from her juicy feminine charm,
he hired Bala straightaway
to keep the honeytrap at bay
but private dicks were of no match
for Aminah's superlative snatch
and now that Najib had had his fill,
he would not share the till;
right after the submarine deal,
Aminah's fate he would seal.
Now Rosmah had one idea
on how to kenakan dia
"Let’s bomb the bombshell,
let's send her to hell."
Thus perished the hapless beauty
after translation and booty duty;
now Rosmah’s ass was happy
until one blogger got yappy;
this Hindenburg nearly caught fire
yet to sue she has no desire.
But Najib's part in this murder
will travel much further;
despite his media actions
and one or two retractions,
some questions will remain
a big part of his bane–
how did Altantuya really die?
and why did he have to lie?
Did he pay off Bala savvily,
or threaten to C4 his family?
What acts could be more despised?
With his money, we’re not surprised;
after all, he's such a bully beast,
to him and him alone, at least,
magic words that cannot apply–
are useful for making rivals die.