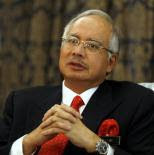 Malaysia's embattled prime minister is buying time by handing over to his loyal deputy only in mid-2010 but the successor's rise is still not cast in stone, experts said on Friday. Prime Minister Abdullah Ahmad Badawi moved on Thursday to calm a political storm by agreeing to hand over power to Najib Razak, giving some relief to investors jittery about Malaysia.

But Najib's road to the top may not be easy. A rift within his own United Malays National Organisation (UMNO) party, the lingering threat of the opposition seizing power and his own scandals could derail the plan and add to uncertainties.

"There's no certainty that Najib will take over," said Yahaya Ismail, an author of several books on Malaysian politics. "The plan will worsen internal squabbles in the party."

Malaysia's political outlook has been clouded since elections in March when surprisingly big gains by the opposition sparked fears of a sudden change in the government and policy.

"It's very important that the political situation settles down," said top banker Nazir Razak, who is Najib's younger brother. "I am sorry but I disagree with the DPM (Najib) when he said that international investor confidence is not affected."

Malaysia's main stock index rose 0.8 percent by midsession on Friday. It has lost 12 percent since March.

Analysts expect no major changes to policies under Najib.

"I doubt he will re-invent the wheels," said one economic strategist at a Malaysian listed company. "His priority is to consolidate his party and regain the faith of the Malays."

"I don't think there will be much change in terms of policies though I am not sure how committed he will be to reforming institutions," said another analyst, who declined to be named.

Abdullah, who faced calls to resign after the polls, said he wanted to ensure an orderly power transition.

Muhyiddin Yassin, an UMNO vice-president strongly tipped to run for the No. 2 post, criticised the long transition period.

"Some have expressed concern that if the duration is that long the situation will not become more convincing," he was quoted by the national Bernama news agency as saying.

"Before the handover date arrives, allegations will be hurled against him so that he will be seen to be unfit to be the deputy prime minister," Mahathir wrote in his blog. "Someone seen to be more loyal to Abdullah will replace him," he said. - Reuters 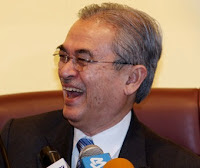 If you think Pat Lah gonna quietly handover the throne to his Najib then you must be sleeping ala Pat Lah too. Two years is a long time for a political game of this nature. Pat Lah might be sleepy but not stupid. Facing opposition from within his own party, UMNO,Pat Lah must ensure that he come out the winner. Getting booted out from UMNO is too embarrassing for Pat Lah.

So by openly declaring Najib as his soon to be successor will buy more time for Pat Lah and at the same time Najib's pledge of loyalty. By doing so,Pat Lah is indirectly asking UMNO members to maintain the status quo and avoid any contest for the two top post in UMNO. A move that makes Najib look so stupid.

Meanwhile Najib is linked to too many scandal. Foremost among them is the Altantuya murder case. Can Najib manoeuver thru this maze of malicious gossip is another story to write about. Whether Najib can weather the storm within these two years is another guessing game that he has to grapple with.

But for now, Pat Lah, has already lured his enemy into a cage and is waiting to burn him alive. Read here and here what Mahathir and Anwar got to say...........

when our politician become ignorance
www.mencandat.blogspot.com