Pat Lah will explain to BN component parties the Umno-PAS meetings that were held after the March 8 general election. He is expected to do so at a BN full council meeting to be held a few days after the management committee meeting on Aug 6, said BN sec- general Adnan Mansor.

PAS can do the same, by explaining to it's Pakatan partners what really transpired and why the necessity to meet UMNO after the March 8 general election.

By doing so,PAS can at least proof that it has nothing to hide from it's Pakatan partners and those who voted them. Though there is no formal agreement between DAP and PAS but the point of contact was thru PKR. The recent development had raise doubts and perceptions about Pakatan Rakyat's future. PAS must remember that the non-Malays too played an important role in bringing victory to PAS candidates in the 12th general election.
The UMNO-PAS talk is just to create suspicions amongst the Pakatan partners and PAS grassroot members, and that will eventually weakened Pakatan Rakyat including PAS itself. Even PAS grassroot members are having doubts about their leader's sincerity now. 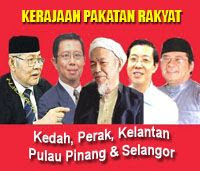 PAS must realize that they had being cheated once by UMNO. UMNO's ploy that it wants to work with PAS is in fact just a gambit to deny Pakatan Rakyat's dream to form the federal government. PAS too must consider whether PAS an Islamic party that uphold the Islamic faith will be able to live with scums,robbers and pirates from UMNO? PAS has come a long way and PAS can no more play second fiddle to UM NO.

The non-Malays are beginning to trust PAS and PAS has got to show that it is sincere in what its doing.This trust should not be breached overnight just because Pat Lah and his UMNO goons entices PAS in order to help UMNO stay in power.

During the last GE, there were hundreds of Indians and Chinese youths mending a large number of PAS "pondok panas", in urban and semi urban areas, a scene that you will never dream off before. PAS must remember that the last time they were in bed with UMNO, they were thrown out like a used condom.

Raja Petra in his latest piece on his 'No Holds Barred' column has this to say, Conjure new sodomy allegations against Anwar. This will get PAS worried and they will start having second thoughts about Anwar and Pakatan Rakyat. Get PAS and Umno to sit down and talk about Malay unity. Let PAS see that their political future lies with Umno and not with PKR, which is going to be brought down by the latest sodomy allegation against Anwar. Tell PAS that Umno agrees to the implementation of Islamic laws in the states they control and that Umno agrees PAS shall be the Menteri Besar (whereas PKR is oppose to Islamic laws just like their other partner in Pakatan Rakyat, DAP). The architects and engineers of the PAS-Umno Malay unity talks realise that offering PAS the Menteri Besar post and agreeing to the implementation of Islamic laws alone is not enough. They need to also destroy Anwar’s credibility to prove to PAS that its future lies with Umno and not with PKR. Read here.