The hospital revealed that Muhammad, a Burmese national, is not a specialist but only a general practitioner stationed at the Emergency Unit.

In a statement distributed to reporters, the hospital's general manager Wan Mahmud Wan Yaakob also said that it has not released any official reports pertaining to the case.

After examining Saiful, he said, the doctor advised the former to undergo an examination by a specialist at a government hospital.

"There were no further examinations carried out (on Saiful at Pusrawi) in relation to the sodomy complaint," he added.

VK Lingam said, "It sound like me, look like me but I can’t 100% sure that was me". Today,when Wan Mahmud was quizzed by the media on the authenticity of the report leaked to the public,he replied: “Looks the same, contents are the same.”

source: Malaysiakini
-----------------------
The fact that Hospital Pusrawi acknowledged Dr.Mohammad was the the medical officer in attendance at the Emergency Unit at the time Saiful was there, proves that Dr.Mohammad indeed did an examination on Saiful, Therefore the leaked medical report was in fact genuine. You dont need a specialist to do a sodomy checkup. Even in government hospitals rape victims are first attended by hospital assistants,than,later by a medical officer, not necessarily a specialist.

How such a confidential document was leaked to the public is beside the point. Hospital Pusrawi has not denied about the authenticity of the document either, though they might be pressured by the police and the others in this conspiracy plot to issue a statement in the opposite. One must remember that Hospital Pusrawi is a business enterprise and it need permits and licences to operate. Guess who issue this permits and licences?

Hospital Pusrawi officials claimed that the doctor on duty did not conduct a sodomy related examination on Saiful. If thats the case why was the leaked medical report being punctuated with medical lingos like PR(per rectal bleeding),no blood in stool,tenesmus for one week,no active bleeding,no ulcer or pus seen,no injury seen,no tear seen,no rule to rule out assault(sodomise) etc,etc........(refer report below) 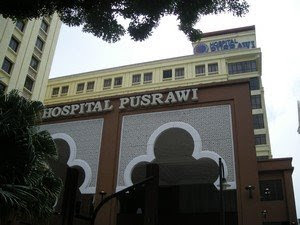 Since Saiful complained that he was sodomized, the doctor did a check-up and Dr.Mohammad must had examined his ass rather than his mouth. Though Dr.Mohammad isnt a "pakar" but with more than 20 years experience surely he could differentiate between a virgin and a sodomized ass? In other words Dr.Mohammad discovered that there was no evidence of penetration on Saiful's "juboq"(anus).

Since Saiful wanted to make a police report Dr.Mohammad suggested Saiful to go to HKL, a government hospital for that purpose.

Anyway, if the HKL medical report states otherwise, then obviously Saiful,the police and HKL has many questions to answer.

Yet,the best is for Dr Mohammad to come out in the open to give his side of the story, that too unless he hasnt being pressured or brainwashed...........

Meanwhile, yet in another stunning revelation in Malaysia Today,Raja Petra Kamaruddin said,at 2.30pm on Wednesday, 25 June 2008, SAC II Mohd Rodwan Mohd Yusof met Mohd Saiful Bukhari Azlan in room 619 of the Concorde Hotel in Kuala Lumpur. Prior to this secret meeting, Rodwan and Saiful spoke on the phone at least eight (8) times.

Three days later, at 2.00pm on 28 June 2008, Saiful went to see Dr Mohamed Osman Abdul Hamid of the Hospital Pusrawi to ‘complain’ that he had been sodomised by ‘a very important person’ and that he wished to lodge a police report.

The doctor, however, found no traces or evidence that he had been sodomised and suggested, for purposes of the police report, that Saiful go to a government hospital. 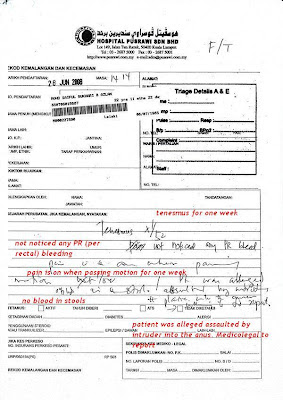 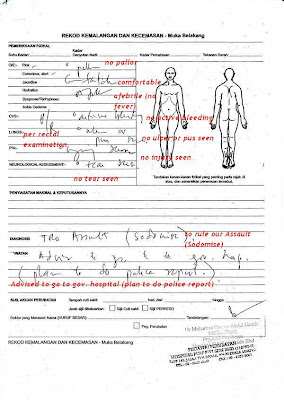