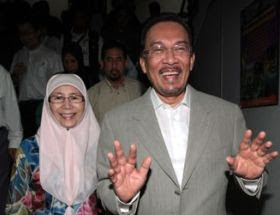 Anwar Ibrahim today reported his accuser Mohd Saiful Bukhari Azlan to the Federal Islamic Affairs Department, urging them to probe his former aide for the sodomy allegations made against him.

Anwar who arrived at the department with his wife Wan Azizah Wan Ismail and his lawyers Kamar Ainiah Kamaruzaman and Ahmad Shabrimi at 10.15am lodged the report and spent about 45 minutes with religious officers.

Approached by reporters after he stepped out, he said he lodged the report urging the department to investigate Mohd Saiful according to syariah laws for making the allegations against him which he said was slanderous and unfounded.

He said he decided to lodge the report after being advised to do so by several Islamic scholars or ulamas.

Anwar also said that he was prepared prove his innocence by swearing by the Quran as suggested by the Perlis Mufti Dr Mohd Asri Zainul Abidin but he refuses to do so if it was meant to challenge him.

He said he will not be part of Umno's political game by adhering to their demands for him to swear by the holy book.

Anwar said he was prepared to carry out the swearing if it is done in accordance to syariah procedures.

He also said the Federal Islamic Affairs Department official had assured him that they will initiate a thorough probe into his report.

Anwar's lawyer Kamar Ainiah said the accusations by Mohd Saiful was qazaf (false accusations of a heinous crime which is sexual in nature) and under hudud laws he could be whipped 80 times if his claims are unfounded.

However, she said current syariah laws here had limited powers and the sentence for the offence was a RM5,000 fine or three years imprisonment or whipping up to six times or all three together can be meted out depending on the severity of the case.

She said Islamic laws also state that such accusations must be substantiated with at least four witnesses for it to be valid. Read here and here.

dinx,
are you one of those who have not been tipu by the ruling goverment. My father was cheated, my grandfatther was cheater, so was I....