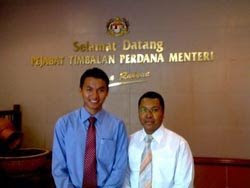 A photograph showing Anwar's accuser posing in the DPM's office with an advisor, link Najib to Anwar's new sodomy allegation. Najib initially denied having ever met the young man, then changed his story, but he denies being behind the allegations.

Though,Najib might deny any involvement but the motive is still there as both Najib and Anwar are rivals to become the country's next PM. Dr Wan Azizah,the opposition leader said, "Najib's closet is full of skeletons, and to divert attention he had to get something on Anwar, because everything is moving too fast and Anwar is gaining too much ground,"

Pat Lah, has promised to handover to him by June 2010. Whether such promise will materialize is another issue. Political pundits thinks that the handover period is a bit too long and not in favour of Najib. Pat Lah might find ways to consolidate his hold to power and along the way might even 'push Najib out 'in favour of another candidate of his liking,and continue to be PM until the next general election.

Najib's ambition to be crown the next PM are threatened not only by Anwar's return to the scene but also he is facing embarrassing allegations of his own. Two of his police bodyguards and one of his closest associates are on trial for murdering a Mongolian lass, Altantuya Shaariibuu who was allegedly demanding her share from supposed to be a corrupt arms deal. Najib is currently the Defence Minister.

Altantuya Shaariibuu was murdered in 2006 and her body blowned to pieces with military explosives. Najib denies ever meeting her or any knowledge of the killing but he continues to face fresh allegations.

Raja Petra Kamarudin, was committed for trial on charges of criminal defamation for alleging Najib and his wife Rosmah were more closely involved than they admits.

The irony is that, both cases have some degree of similarity that both are based on accusations. However they were treated differently by the gomen and the authorities involved. One with dignity(Najib & Rosmah) while the other(Anwar & Raja Petra) with hostility. In Rosmah’s case the burden of proof is on the police to proof her guilt, but as for Anwar and Raja Petra the burden of proof is on them to proof their innocence. When you have different sets of law for different category of people, can the police then convince the rakyat that they acted without fear or favour?

Karpal Singh's application to call Najib as witness and recall PI Balasubramaniam to the stand in the on-going Altantuya Sharibuu murder trial was thrown out today.

The year long Altantuya murder trial proceeded without any direction as the real motive of Altantuya’s murder was not addressed. Sure enough when you murder someone is not just for the fun of it but with some motives. Her body were blown to pieces in a mysterious manner by the two accused. Common sense tells you that they would not have acted on their own but on instruction from their superiors. Who are their superiors? 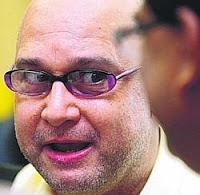 Today Raja Petra came out with another startling disclosure that could blow apart what was suppose to be a well meted plan of destroying Anwar's political comeback. Raja Pertra's expose, reveals that Saiful had met Najib not to ask about a scholarship or career guidance briefing, but to deviously plan how to nail Anwar with the sodomy charge.

That's probably why the police cannot produce Saiful's police report, coz it got to be amended now and then. Read Raja Petra's expose here. Make your own conclusions............... 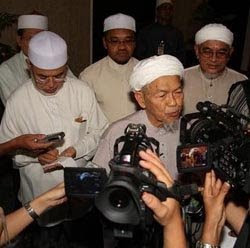 On another front, Pas's Majlis Syura Ulama (the religious scholars' consultative council)today decided that there will be no more muzakarah (dialogue), only muqabalah (ordinary meeting) between Pas and Umno with regards to the controversial Pas-Umno Malay unity talks. The two-hour meeting chaired by Nik Aziz at his residence was attended by, among others, Hadi and his deputy Nasharuddin Mat Isa, Nik Aziz's deputy spiritual leader Dr Harun Din, vice-president Ahmad Awang and ulama'chief Mohamed Daud Iraqi.

Pat Lah admitted that he met PAS leaders, excluding Nik Aziz, three times since the March 8 general election. Hadi confirmed Pat Lah's statement but only revealed details of two meetings. Abdul Hadi stressed that,"There was no question of PAS joining the federal government because PAS is still with Pakatan Rakyat. We will continue to be with Pakatan to fulfill our common political wisdom," he said.

UMNO is drowning and trying hard to reach out to PAS for help. Are the Malays losing their Ketuanan Melayu just because the Malays are not being united? Nope..........

Well,actually the situation is that the Malays got united to overthrow a corrupt gomen... and it so happens that this corrupt gomen in question is UMNO/BN.