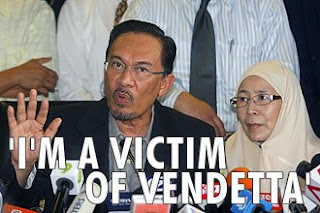 Mr.Anwar Ibrahim said on Thursday he was the victim of a 'vendetta', after being held overnight on sodomy accusations levelled by a young male aide. Mr Anwar, who was released on bail, said he was treated like a 'major criminal' and needed medical treatment after a night in a bare cell at Kuala Lumpur police headquarters which aggravated a back injury.

'Dumped in a cell to sleep on a cold cement floor with nothing... that has exacerbated the pain,' said Mr Anwar, who was arrested on Wednesday by a team of police commandos.

'I don't deserve this - no Malaysian deserves this. Why treat me like a major criminal?' he told a press conference, adding that he was subjected to an examination which included the measuring of his genitals.

'They have seen all my private parts. Of course I refused to be photographed, it could be on YouTube very soon! You mean I can trust the system?' Mr Anwar rejected the allegations levelled by 23-year-old aide Mohamad Saiful Bukhari Azlan as another conspiracy, following the events of 1998 when he was sacked as deputy premier and jailed on sodomy and corruption counts.

'It appears that the events of the last few days, the nature of my unwarranted arrest, my overnight incarceration which was actually absolutely unnecessary, were an act of personal vengeance against me,' he said.

'They should not use this as a personal vendetta against me.' Mr Anwar said he was being targeted because of allegations he has made against the attorney-general and chief of police over his treatment during his original trial.

He has lodged a police report accusing them of manipulating evidence in an investigation into the severe beating he received when he was in police custody at the time.

The 60-year-old opposition leader defended his decision not to give a DNA sample during Wednesday's examination, saying he had no faith in the system after fabricated DNA evidence was used against him in his trial a decade ago.

'My decision to refuse a DNA test is taken through advice of my lawyers and DNA experts,' he said.

And he criticised the decision to arrest him, when he had agreed to face police interrogation at a meeting scheduled just an hour after he was picked up by police.

'I am disappointed with the way the police have handled this whole situation,' he said. -- AFP

Meanwhile, an upset Anwar Ibrahim lashed out at the police saying that to date they have not given him a copy of the police report of the sodomy allegation made by Mohd Saiful Bukhari Azlan. He questioned why despite repeated requests the police report was being kept from him and his lawyers.

"If they give the report to me now, how am I supposed to know that it is the original? Are they waiting to make up the 'perfect' police report (to fix me)," he said, adding that each time he asked the police for a copy of the report, he was told they had been instructed against giving him a copy.

"Who gave the instruction? The Deputy Prime Minister or his wife? The IGP or AG?" he asked.

He said there has never been a case where a suspect did not know exactly what he was being accused of or denied access to the police report made by the accuser.

He said some of those involved like the AG Gani Patail and the IGP Musa Hassan had a personal vendetta against him as they were involved in the 1998 case against him.

"I went through hell in the 1998 case. They should not use this as a personal vendetta against me," he said, adding that both Musa and Gani should have nothing to do with the case.

Anwar also disclosed that during his medical examination that he was made to undergo at the KL Hospital, he was stripped naked, had his whole body was examined including his private parts measured.

"Of course I refused to be photographed because it would be on (video sharing portal) YouTube very soon! For a man of my age, it's not a compliment!" he quipped, to much laughter.

Anwar said he did not agree to having a blood sample taken because he did not trust the system and feared that the police would fabricate evidence against him using his DNA as he alleged they had done 10 years ago for a similar crime. He said while he trusted the doctors and their professionalism, they could not guarantee the safety of the sample once it was handed over to the police.

He cited the 1998 sodomy case where the police found his samples on a mattress to implicate him and when the court found the evidence inadmissible, Justice S. Augustine Paul merely expunged that part, amended the charges and let the case proceed instead of throwing the case out. He also pointed out that in the present case, Mohd Saiful was still under police protection "making any fabrication possible" if they obtained his DNA.

In any case, he said, the police already had his DNA sample of 10 years ago which they forcibly obtained from KLH.

Anwar refused to give a DNA sample on Wednesday night because they feared there would be fabrication of evidence, which Anwar had alleged had taken place in the infamous "black eye" incident of nearly a decade ago. At that time, Anwar was alleged to have committed sodomy too.

Probably the police is waiting the DNA profiling to complete the script before a perfect police report is produced. 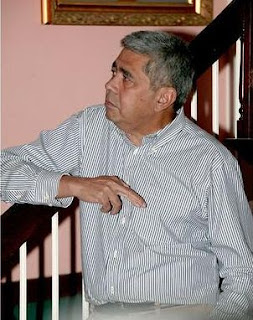 It is time we make IGP Musa Hassan accountable to the nation for what is suspected to be conduct detrimental to the honour and integrity of the Royal Malaysian Police Force.

For starters, he should be asked to go on extended leave to allow a thorough and unfettered investigation of the evidence fixing report by Anwar Ibrahim. This mattress lugging IGP has plenty to answer for. One would not be far off the mark if one thought the method and style of the party that arrested Anwar Ibrahim near his home carried Musa’s imprimatur.

It was as if they were on the trail of a dangerous misfit whose arrest and arraignment was top priority for the Force. You would not suspect that it was over a report of sodomy; more like arson or murder — the way they were clad in balaclava and toting weaponry suitable for the interdiction of a Botak Chin or a Bentong Kali.

Come on guys, this is Anwar Ibrahim they were after. Unless you are suffering from a severe case of amnesia, this is the former Deputy Prime Minister and Finance Minister of Malaysia, a man widely regarded as one of the Muslim’s world leading public intellectuals, esteemed by political leaders and opinion makers in the West and in the rest of the world and recently listed by Time magazine as the only Malaysian in their ranking of the world’s 100 Most Influential People.

Detained and subjected to questioning at the Kuala Lumpur Police Headquarters, the Police then took him to the Kuala Lumpur General Hospital for a medical examination that required him to strip and have his private parts examined.

Thank God, he had the presence and sternesss of mind to refuse to be photographed in the buff. Had Anwar submitted to the usual Police pressure tactics (that is the Good Cop Bad Cop routine, I mean), there is no guarantee that these photographs would not be manipulated for salacious couplings with Godness knows who–to bolster innuendoes about his sexual perversions.

When it came to extractions for a DNA test, Anwar flatly refused, knowing that he would be subject to the possibility of more diabolical manipulations by the same people who took such obscene delight in lugging a supposedly semen-stained mattress at his previous sodomy trial in 1999. Having been bitten by that traversty of a trial, Anwar is suitably warned.

Of course, his refusal to submit to a DNA sampling now exposes him to the surmise that he has something to hide. But such deductions do not take account of one glaring fact that Anwar has yet to be shown the report of his accusser. There is more than an even chance that the catamite had not made a detailed report of his alleged abuse by Anwar, thereby leaving the Police with enough latitude to construct ‘events’ and create a case for prosecution.

As Anwar said at his press conference today in Bukit Segambut rather emphatically, “[Can] you imagine - I was asked to stay in the lock-up overnight, spent five-and-a-half hours answering questions and I’ve not seen Saiful’s (Bukhari Azlan) report.” Talk of phantoms, Saiful’s report has become, with apologies to the late Saddam Hussein, “the Mother of all Phantoms”.

While I have the highest regard for the ordinary mata-mata who exposes his life and limb in the normal course of duty, braving the elements at times so that Malaysians can enjoy peace and security at work and at play, I regret to say that I have nothing but contempt for certain elements in the top brash of the Force who have no qualms of conscience about being satraps of political pharoahs.—Din Merican

He's making a lot of noise with the treatment that he'd received. Unnecessary noise. He should know better since he'd been through it before.