The Anwar and Raja Petra fiasco meant to intimidate the public...... 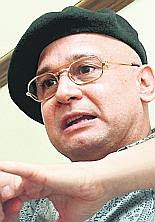 Before the Anwar fiasco, even settled, Malaysia Today editor Raja Petra Kamarudin, was arrested and charged for defaming DPM Najib’s wife, Rosmah Mansor, and two others.

Anwar has gone through the mill, so as to speak, and so has Raja Petra. In some way they become folk heroes for those who have not even stepped into a police station to write a police report, let alone getting involved in some criminal activity.

Raja Petra's lawyer Amarjit Singh Sidhu alluded that the charge was defective because Raja Petra was initially investigated under Section 203 of the Penal Code for giving false information relating to an offence committed. This isnt right because it catches the lawyers and the accused off-guard. When we found out it was Section 500 instead of 203, we were shocked,” he told reporters.

According to Section 500 of the Penal Code, “whoever defames another shall be punished with imprisonment for a term which may extend to two years, or with fine, or with both”.

Surely the Police and the Attorney chambers should know which is which. But if it is just to put Raja Petra behind bars,then it really sucks. Or maybe to them it does not matter how or what, as long as they make sure Raja Petra is behind bars. Sure enough it looks more like a cruel joke,but not for the first lady in waiting.........

The message that they are sending is its a crime if you dont support the BN gomen and its wrong to make a report or pen a SD on any misdemeanour of any BN leaders.