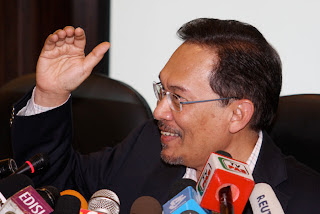 Sodomy claims against Malaysia's Anwar Ibrahim could actually galvanise support for the charismatic opposition leader, analysts say, due to the widespread belief they are politically motivated.

The allegations, which Mr Anwar says are a plot to prevent him from seizing power, are a re-run of events of 1998 when he was sacked as deputy prime minister and jailed for six years on sodomy and corruption counts.

Mr Anwar fled to the Turkish embassy in dramatic scenes over the weekend, saying he feared a government assassination attempt after being hit with 'fabricated' new accusations by a 23-year-old male aide.

Now he has emerged, promising a showdown with the ruling coalition which he has vowed to topple with the help of defectors, after stunning March elections that handed the opposition a third of parliamentary seats.

Observers say that whatever the truth, the Malaysian public is tired of dirty politics and deeply sceptical of the new claims - a mood that will spell trouble for the government if the case against Mr Anwar collapses.

'If people see there is no credibility with regard to the investigation, the government will be in a very difficult position,' said Mr Mohammad Agus Yusoff, a political analyst with the National University of Malaysia.

'It will be a very dangerous political game if it's not true.'

The Merdeka Centre research firm conducted a small survey that found just 10 per cent of respondents believed the allegations, and nearly 60 per cent viewed it as politically motivated.

'This whole episode may have benefited Mr Anwar more than it has damaged his reputation,' said the firm's pollster Ibrahim Suffian.

The affair could further undermine Prime Minister Abdullah Ahmad Badawi, who is facing calls to quit after the March elections which were followed by an unpopular fuel price hike that triggered a series of public protests.

'It has some likelihood on backfiring on the government, depending on how they handle it,' Ibrahim said.

The scandal has erupted at a torrid time in Malaysian politics, with Mr Abdullah's party in disarray after the polls, and his heir apparent deputy premier Najib Razak forced to deny links to the sensational murder of a Mongolian woman.

It also comes as the nation's justice system is in the spotlight after a number of explosive stories, including a senior judge's claim that he was sent on an indoctrination 'boot camp' to promote pro-government decisions.

Mr Anwar has said he has no confidence in the justice system, after his experiences a decade ago when he was badly beaten by the police chief and appeared in court with a black eye.

Bridget Welsh, a Southeast Asia expert from Johns Hopkins University, said the scandal could either delay Mr Anwar's plans to seize power by casting doubt over his ability to govern, or conversely jump-start his ambitions.

'Him being under attack only inspires more people to come to his defence and to rally around him, because people will potentially see this as an unfair accusation,' she said.

Many observers said the authorities would tread more cautiously this time, after the saga of a decade ago.

The nation's highest court eventually overturned Mr Anwar's sex conviction but the episode damaged the nation's reputation and reverberates to this day.

'I would not expect the Malaysian government to be so foolish as to arrest him again and ignite a groundswell within society,' Mr Welsh said.

'But the reality is is that mistakes often are made... What happens here will decide the path of Malaysia in the future.' -- AFP

Another astonishing revelation about who Saiful is related to....here and here.