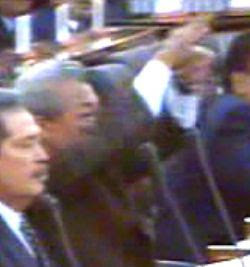 Those who caught RTM1's live telecast of the Dewan Rakyat question-and-answer session were shocked over a lewd gesture made by Kinabatangan MP and Barisan Nasional Backbenchers Club (BNBBC) deputy chairman Bung Mokhtar Radin during a shouting match.

The RTM1 camera was trained on Bung Mokhtar who was standing up to engage in a verbal tirade with the opposition camp, with each calling the other bodoh! (stupid). As he was sitting down, the camera caught the MP, who is no stranger to controversy, making the lewd gesture of slapping one hand over a clenched fist. Bukit Mertajam MP Chong Eng said she did not notice the gesture in the Dewan but said she received a few calls from her constituents asking her why an MP had behaved in such a manner.

When approached at the lobby later, Bung Mokhtar denied it was a lewd gesture, and demonstrated to the reporter what he claimed he did -- slapped the back of one hand with the palm of the other. (photo). Bung Mokhtar admitted he was angry when the opposition members provoked him by calling him bodoh.

Chow Kon Yeow (DAP-Tanjung) had earlier said that Bung Mokhtar did not know how to count as there were more opposition MPs than BN backbenchers in the Dewan at that time. This was following a protest by Bung Mokhtar over the mileage being given to the opposition as responses to their questions were being aired live over RTM. Asked what he meant with his gesture, Bung Mokhtar said: "I was angry with him, I make like that (hand gesture again). He called me bodoh, I say you bodoh too."

When told that a lot of people who watched the incident on live television saw it as a lewd gesture, he said: "No, I don’t know what is their interpretation but it was nothing for me, I (just gestured) like that (hand gesture)."

"The government is paying the 30 minutes of airtime and I was asking why the opposition was being given so much of mileage during prime time," he said.

The incident prompted deputy speaker Dr Wan Junaidi Tuanku Jaafar to say that even with years of university education, the MPs still could not follow decorum.

"I have been around for a long time and see the culture changes, and we seem to be moving backwards. I wonder how we can achieve first world Parliament status this way," he added. 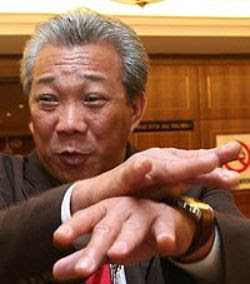 Kinabatangan MP: Yes, I did it but...

Bung Mokhtar Radin (Kinabatangan-BN) today did a U-turn, admitting that he had made an obscene gesture in the Dewan Rakyat yesterday during a dispute with some Pakatan Rakyat MPs.

He seemed unfazed by the prospect of any action against him, saying he had not done anything wrong. The obscene gesture was aired during the 30-minute daily ‘live’ telecast of the Question session on RTM1, but went unnoticed in the chambers because the in-house cameras were not focused on him.

The BN MPs are really good at this......and the august house allowed such indecent gesture to get away just because it happened few days ago, so says the speaker. Read here.