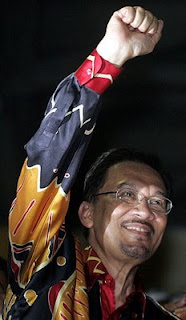 Anwar Ibrahim has already being listed in the Website of the Malaysian Parliament here. Surely they acted fast. All the best to you YB Anwar Ibrahim.

Another interesting analysis of Anwar's victory from the Malaysian Insider.........

Anwar's in, Pak Lah's out

Datuk Seri Anwar Ibrahim's stunning win at the Permatang Pauh by-election not only cemented his position as the undisputed leader of the opposition in Malaysia, it prompted senior Umno politicians to begin the countdown to Prime Minister Abdullah Ahmad Badawi's last day in office.

The majority view is that he has to go by the end of the year if Umno and BN are to stand any chance of checking the advance of Pakatan Rakyat and holding onto to power at the next general elections.

Tuesday night was a repeat of March 8 with Pakatan Rakyat giddy with an electoral success and BN politicians dizzy with another rejection by the public.

But the joy was sweeter for the opposition because their icon not only won but did so in style, trouncing BN's Arif Shah by a 15,671 majority, 2,000 more votes than what his wife obtained five months ago.

The pain was more severe for BN because unlike March 8, they were not caught blind-sided. They poured in millions of ringgit into the campaign, brought their heavy hitters, threw every conceivable missile at Anwar but still ended up losing badly.

The consequences of the Permatang Pauh by-election could be far-reaching, with even Prime Minister Datuk Seri Abdullah Ahmad Badawi's neatly-packaged two-year transition of power under threat from increasingly disillusioned party members and leaders of coalition partners.

On Tuesday, only two hours after the last box of votes had been counted, senior Umno politicians were in deep discussion over the need for Abdullah to step down, believing that he had lost the ability to check a resurgent opposition.

A check of the voting pattern at 25 polling stations showed that Anwar snared a handy portion of Malays votes and the bulk of non-Malay votes.

Arif Shah(BN) secured 15,524 votes out of 47528 votes cast or 81% turnout. Assuming these 15,524 votes are from BN diehard members,how many came from UMNO members? Maybe many UMNO members did not vote, because they are tired of with UMNO,Pat Lah and Najib. UMNO says they have about 20,000 registered members in Permatang Pauh and they(UMNO members) had voted Anwar Ibrahim instead..............