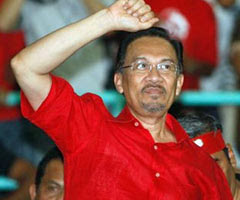 At a function at Taman Permatang Janggus here which was to be launched by Deputy Prime Minister Datuk Seri Najib Razak, a TV journalist heaved a sigh of relief when her latest assignment was a wrap. After a whole day of searching and numerous failed efforts, she managed to get the interviews she had been asked to carry out by her producer.

Though there were hardly 50 Barisan Nasional (BN) supporters, most of them womenfolk of the village who had gathered to witness the launching of the BN Permatang Pasir election machinery by Najib, she managed to find a few men and women willing to say a few words for the camera.

The journalist had gone to several villages in Permatang Pauh, but could not get anyone willing to go on record to express support for the BN, nor its candidate in the Aug 26 by-election, which will see Parti Keadilan Rakyat (PKR) de facto leader Datuk Seri Anwar Ibrahim making his bid to re-enter parliament after a 10-year hiatus.

Challenging him for the seat, which fell vacant when PKR president Datuk Seri Dr Wan Azizah Wan Ismail resigned as Member of Parliament on July 31, are his protege Datuk Arif Shah Omar Shah and political minnow Hanafi Hamat, president of Angkatan Keadilan Insan Malaysia (Akim), a splinter group of PAS. If the TV journalist’s predicament is anything to go by, the BN clearly faces an uphill battle to wrest the seat which has been held by Anwar and Wan Azizah over the past 26 years. Anwar won the seat for the BN with thumping majorities in 1982, 1986, 1990 and 1995 while wife Wan Azizah won under a PKR ticket in 1999, 2004 and in the March 8 general election.

During his numerous ceramah attended by mammoth crowds since July 31 and despite the fact that the speeches have hardly differed, Anwar has always succeeded in holding his audience captive, right until the closing words, always when it is close to midnight. His speeches, which tug at the heartstrings of his constituents, are always well received, with thunderous applause.

"It is the voters of Permatang Pauh who have stood by my family and me during my good times and my bad," Anwar tells the crowd. "When I was at the height of my career as a minister and deputy prime minister you gave me support."

"Even when I was down and out in prison, you still stood by me and Wan Azizah during the three general elections that she contested on my behalf," he says.

"It is with this confidence that I am coming before you all again, to judge and appraise if I am worthy of your trust again despite all the allegations which have been levelled against me," says Anwar.

"All of you carry with you a heavy burden as you are holding the future of this country in your hands come Aug 26, and you all know deep down in your hearts that I will not let all of you down."

So runs his oft-repeated message to those who trudged to the remotest parts of the constituency to listen to him speak. At each rally or ceramah held by the BN and PKR, there was one name which kept cropping up without fail - Mohd Saiful Bukhari Azlan. Only two people keep bringing up his name and the sodomy case - Najib and Anwar, both of whom are aiming for the prime minister’s seat. 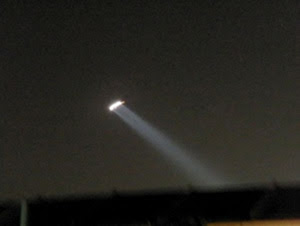 Despite the fact that Najib, when launching the BN election machinery last Wednesday, said he would not touch on the case as it was a personal matter between Anwar and Saiful, he has strayed back to the subject without fail each time. Najib told the 2,000-odd BN supporters that he would not talk about the sodomy allegation as it was not the BN which lodged the report against Anwar but his own personal assistant whom Anwar had personally hired.

"Since we respect him as a leader, we should not pre-judge Anwar to say he is guilty, but we will be fair and just to him and won’t resort to anything unethical," said Najib.

However, last Friday, Saiful swore on the Quran that he was sodomised by Anwar, on the eve of nomination for the by-election. With accusations going around that Najib had orchestrated the Saiful episode, Najib keeps reiterating that the sodomy case has nothing to do with him or BN, without fail at every function. He even praised Saiful for his willingness to swear on the Quran.

Meanwhile, Anwar keeps saying the charges are politically motivated and has refused to emulate Saiful by swearing on the Quran. Oddly, the BN candidate Arif is only mentioned in passing or not at all during these speeches by both Najib and Anwar, who seem more inclined to speak about the sodomy charges or Saiful.

Whether Saiful’s swearing on the Quran on the sodomy charges would have a bearing on the outcome of the by-election, is left to be seen. However, going by the sentiments of the voters, who have been said to be emotionally loyal to Anwar, these accusations and charges are considered unfounded.

Unless some other "stronger" evidence can be pinned on Anwar in the next few days, Anwar seems to be assured of his seat as the Opposition Leader in Parliament, and as he has repeatedly told his supporters, he will be there in his rightful place on Aug 29, sitting right in front of Prime Minister Datuk Seri Abdullah Ahmad Badawi while he presents Budget 2009.

Btw. the third candidate in the 3 cornered fight for Permatang Pauh, Hanafi Mamat, is still not around. Rumours has it that this Hanafi guy was sponsored by disgrunted UMNO members in Permatang Pauh. It seems that both of his supporters during the nomination day were from UMNO. One theory says that Hanafi's role was to split the Malay votes. But, since Hanafi is seldom seen campaigning, I wonder whether he can even retain his deposit.