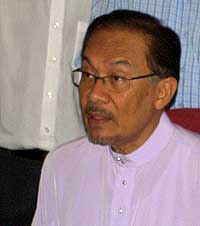 Anwar Ibrahim will be charged for sodomy in the Sessions Court here today. Deputy Inspector-General of Police Ismail Omar said the move to charge Anwar was made following a decision by the Attorney-General's office. He said a written notice had been issued to Anwar to be present at the Kuala Lumpur Session's Court, Jalan Duta, at 10am.

"Police have carried out an investigation on a sexual crime involving intercourse against the order of nature involving Anwar, based on existing legal principles and procedures. The investigation papers were handed over to the Attorney-General's office for advice and a decision," he said.

Coincidentally, the serving of the notice comes on the day the Election Commission (EC) fixed Aug 16 as nomination day for the Permatang Pauh parliamentary by-election in Penang and Aug 26 for polling if there is a contest.

The seat was vacated by PKR president Datuk Seri Dr Wan Azizah Wan Ismail, to pave the way for her husband Anwar to return to national politics.

In a press conference at the PKR headquarters after he had received the police notice, Anwar said he was being prosecuted for "a crime that I did not commit".

He also slammed the timing of the decision, saying it was a conspiracy to bring him down. 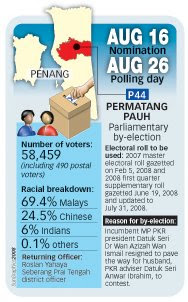 Meanwhile,the Election Commission (EC) today fixed Aug 16 as the nomination day for the Permatang Pauh parliamentary by-election in Penang and Aug 26 for polling if there was a contest.

Election Commission Chairman Tan Sri Abdul Rashid Abdul Rahman said in the by-election, the EC would be using the 2007 master electoral roll which was gazetted on Feb 5, and the 2008 first-quarter supplementary electoral roll, gazetted on June 19 and updated on July 31.

"A total of 58,459 voters, comprising 57,969 ordinary voters and 490 postal voters, are eligible to cast their votes in the by-election," he said in a statement after chairing a special EC meeting on the by-election here today.

The statement was distributed to the media by EC Public Relations Officer Sabri Said at the EC headquarters lobby.

Charging Anwar on the very same day that the dates for nomination and polling for the Permatang Pauh by-election by SPR really stinks on the part of the gomen and what a sad day for Malaysia. Hopefully Anwar will get bail and be return to parliament soon..