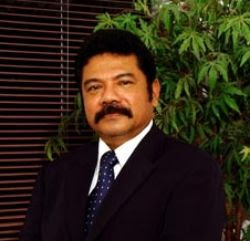 UiTM's vice-chancellor Prof Ibrahim Abu Shah called Selangor MB Abdul Khalid Ibrahim a "kerbau di cucuk hidung" after the MB proposed that Universiti Teknologi Mara (UiTM) be opened to non-Bumiputeras. He also said,"UiTM was the last educational bastion for the Malays and other Bumiputeras to help change their lot, hence no quarters should interfere with its founding objectives and administration."

UiTM vice-chancellor further went on to say if Pakatan Rakyat becomes the ruling government, not only can they open up UiTM to non-Bumiputeras, they can also change the Constitution, including turning the country into a republic!

Having established his academic credentials, its worthy to look at his 'political contributions' as follow;

Prof.Ibrahim might have his point but reading his political credentials tell me who is the "kerbau" and whose "hidung yang kena cucuk " ? Dont you think that Prof.Ibrahim is voicing his master's voice........

The idea of opening UiTM to non-bumis isnt a new issue but an old one that was brought up a couple of years back. And as Prof.Khoo Kay Kim said over TV3,"ini isu lama dan pada masa itu tidak seorang pun mau bersuara". But why now?

Get the point fellows, the Permatang Pauh by-election is just days away and BN is gonna to harp on this 'isu basi cara besar2an'...

The UMNOputeras are milking Malaysians dry, and at the same time shouting about "bangsa" and "ketuanan Melayu" to the ordinary Malay folks.UMNO leaders are channeling out stacks of cash to foreign banks.

Hello, dear Malays, what happened to the 3 billion oil royalty money paid by Petronas to the former Trengganu gomen? So far, no news, no one being questioned, everyone from UMNO President to ketua cawangan are keeping mum.

Frankly I do not understand how the Malays are so blind to UMNO sodomizing them in the name of ketuanan Melayu...............

I mean the Author.