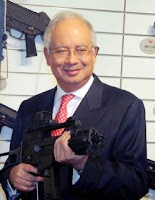 Najib Tun Razak criticised the attitude of members of the opposition parties who were said to be rude to national leaders in campaigning for the Permatang Pauh parliamentary by-election.The DPM said the opposition parties had engaged groups to shout and show lewd signs at Barisan Nasional (BN) leaders and followed these leaders wherever they went.

“The opposition did not show any respect to their opponents. Is this the image of the party that wants to rule the country,” he said when visiting the BN Youth Main Operations Room, here Sunday night.- Bernama

----------------------
Here are some BN pornographic antics, that the gomen mass-media too shy to show you....... Take a close look, judge for yourself and tell me whether Najib Abdul Razak is telling the truth or he's simply talking thru his nose?

Meanwhile BN has given some goodies for Permatang Pauh folks;

a. RM 1.2 million for 6 chinese schools in the Permatang Pauh constituency. This aid comes during election or by-election will forever remain a mystery.

b. During a function held at a Chinese school in Kampung Sungai Lembu this afternoon, Deputy Education Minister Dr Wee Ka Siong announced an allocation of RM200,000 for the school.

a. Wee also announced a meagre sum of RM50,000 each for two Tamil schools in Butterworth which do not fall under the Permatang Pauh constituency.

b. AIMST university. BN champion Indian and Chinese communities’ causes as they have been neglected by the opposition. To support this argument Najib said BN government set up Asian Institute Of Medicine, Science and Technology.

There are more is to come says BN candidate Arif Shah, after all there are 5 days more to go before polling day on 26/8/08. Arif Shah also said if he wins he'll be able to pour more money into Permatang Pauh.

This raised the questions as to whether such goodies flouted election laws which clearly stipulate that an election candidate is prohibited from handing out goodies as it could be deemed as a vote-buying attempt.

But,as an UMNO culture, handing goodies, in the form of goods and cash is not deem as corruption......only politik wang,they says....... 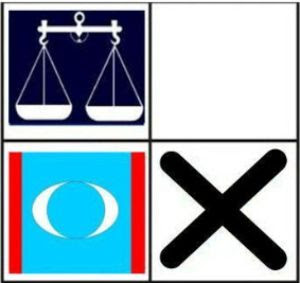