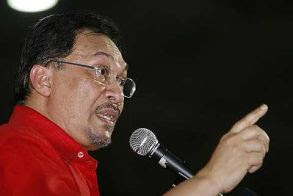 I crossed the Penang bridge at 8.30 pm with a couple of friends and as we approached the mainland, traffic was already moving slowly. We made our way to the ceramah area, after parking our vehicle about a kilometer away and walked. Jalan Baru was jammed with cars and motobikes,many double parked and that caused massive traffic jams for vehicles heading towards Bukit Mertajam.

It was drizzling and the crowds were swelling. Couldnt enter the ceramah area as it was congested. At the podium was Gobalakrishnan giving his fiery speech. We stood under a PKR tent crowded with people and there I met bloggers Zorro,Raja Petra,Rocky Bru and others. Later on met with Anwar's brother Idrus Ibrahim and chat over a cup of teh tarik and bihun soup.

People of all races - Malays, Chinese, Indians either standing or sitting on the ground to hear speaker after speaker taking their pot shot at BN and the gomen. Leaders from PAS and DAP were around too. An estimate number of between 40,000 - 60,000 converged here to listen Anwar's last call.

As it was getting late; raining quite heavily; the place was too crowded with people, and my legs were aching I decided to leave for home.We missed Anwar's final speech but I am sure he will repeat whatever he said before.

On the way home we spoke about how BN adopted various strategies to stop Anwar from entering parliament.BN dissolved Parliament and conducted the 12th GE on March 8, a month short for Anwar's eligibility to contest in public election.

Charged Anwar for alleged sodomy on Saiful Bukhari Azlan a day after the EC has announced the by-election date. They scheduled polling day on Tuesday, a working day. Mohd Saiful'swearing on Quran allegation sexual assault a day before nomination day.

The non-stop screening of the swearing ceremony; the startling revelation by ex-PKR leaders; and the distribution of unanimous printed materials and, putting up banners and posters with racist scoffs on Pakatan Rakyat leaders.

I told my friends that this by-election is not about Anwar Ibrahim winning,but its rather the magnitude of his victory. If Wan Azizah could retain the seat by a 13,000 majority,I think he should do it better. But that was during a general election,while this is a by-election.

In a by-election BN always will be on the advantage. BN could mobilise all its resources and firepower to bury their opponent. Just see how much they promised,pumped and throw money around. On an even ground Anwar can easily trash his opponent but in a by-election like this, just like Ijok,many strange things can happen - the tainted electoral rolls,undi hantu, doubtful postal voters, missing names etc,etc.

As the clock ticks away in Permatang Pauh to end the intense campaign, my bet is still on Anwar Ibrahim winning this by-election. It doesnt matter by what margin the majority he gets. To me the fact remains that even if Anwar wins with one vote, it's still a victory.

My friends agree that no matter what the outcome of the by-election polling result at Permatang Pauh, BN will lose.

To those elegible Permatang Pauh voters do come out in force and make sure you send Anwar Ibrahim to Parliament................ 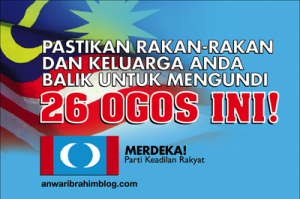