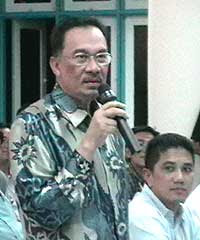 The tent set up at the open air carpark next to the Ku Cheng Tse temple here last night was packed to overflowing with the local Chinese community eager to see and hear Datuk Seri Anwar Ibrahim. Underneath the marquee, the tables were abuzz with talk of the federal government’s latest announcement of a reduction of petrol prices at the pumps by 15 sen per litre, effective today. Closer to the back of the tent, a group of older gentlemen were discussing the issue with great fervour. Having just finished the lotus leaf fried rice course, they were very willing to share their opinions on the matter.

Did the Barisan Nasional government think they were naive not to suspect that the announcement had something to do with the upcoming Permatang Pauh by-election next week, they asked. The question was rhetorical, as they each had already formed their own opinion. Anwar was contesting, and the federal government was scared. They feared that he would win and would become the next prime minister, just as he promised he would do. And judging from the many nods round the dinner table, it was also what they all wanted.

“Everyone says An Hwa will win. No doubt about it,” said one of the gents in Hokkkien, a 52-year-old businessman who wished to be known only as Ah Lim. He added that the dinner was his second time attending an Anwar ceramah. Ah Keat was not happy with the 15-sen drop in the petrol price. He’d first heard the opposition icon speak at the Ruby coffeeshop, which seems to be a popular jawing joint among the local Chinese, last week. And he firmly believes that Anwar will be a good leader and will be able to effect change for the betterment of the rakyat when he re-enters Parliament.

Ah Lim further said that Anwar’s wife was a good MP; that’s how she was able to stay the Permatang Pauh MP for three terms before vacating the seat last month to make way for her husband, whom he believed would make an even better MP. He’s got the DAP and Pas to fight for one common goal with him, Lim said, noting that it was not an easy thing.

“He will be sure to take care of the interests of the Chinese, because he will want to keep the support of his allies,” Lim added.

A younger man two seats away jumped into the conversation. He appeared more enthusiastic about Anwar’s chances in the by-election.

“Anwar will win but with a bigger majority than Azizah,” he said most emphatically. As a voter, he was going to do his best to make sure of that.

“We want the BN to forfeit their deposit. Why? Because we want to shame the government. It’s a useless government,” he criticised harshly. He got rather carried away and said that “Pak Lah and Najib can go to hell! You can quote me on that,” he said. However, he would only give his name as Ooi from Kuala Lumpur but originally from Seberang Jaya. 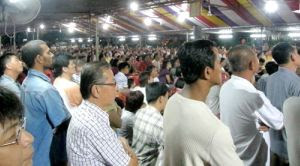 A woman applauds a remark made by one speaker at the dinner. His table-mate, 64-year-old Wong Ah Foo, who has worked 40 years in the construction line held a more moderate stance.

“BN okaylah. The wakil rakyat got jaga our people,” he said, referring to the BN-Umno state assemblyman who is also a candidate in the by-election, Datuk Arif Shah Omar Shah, who is fondly known to the local Chinese as “Pek-moh” or “White hair”.

“Pek-moh is a good man. If we need anything, got no money, we can always go to him and he will help us. That’s why he cannot go to Parliament. He has to stay here and take care of local matters,” Wong elaborated, stressing that Arif Shah was more concerned for the Chinese’s welfare than the so-called Chinese political parties, MCA or Gerakan, who are supposed to represent their community.

“BN got too much corruption. They spend so much money but got nothing to show for it. Anwar has got the right spirit to bring about change,” said Jin Aan.

A round-faced 52-year-old who only wanted to be referred to as Ah Keat started the volley going when he criticised the 15-sen drop in petrol price.The schoolbus driver said: “As the saying goes: ‘It takes a crook to catch a crook’.” The whole table burst into uproarious laughter. Whether Anwar was innocent of the sodomy allegations or the corruption charges, for which he was imprisoned six years for despite continuously denying them, did not seem important to this group. As Jin Aan concluded: “This year’s March 8 elections proved something. That the people do have power. It’s given us all the confidence that we can effect change.

“The BN has been in power for 50 years. That’s enough. So we’ll give Anwar his chance. If Anwar doesn’t perform, well, we’ll kick him out at the general elections in five years’ time.”

------------------------
Meanwhile leaflets of those premature Government line-up from Pakatan Rakyat really irks me. I don't believe that these leaflets were given out by Pakatan Rakyat. It's just a scam of BN trying to unsettle non-Malays' votes. BN is trying it best stop non-Malays to cast their votes away from PKR and BN will anything they can think off in order to tarnish their opponent.

The famous SIL, Khairy wants Anwar buried. I just simply cannot tolerate this Rembau kid who shout and brags as if he knows everything. He only knows to bark but never provide any solution to whatever problems he elicits.

I think its time for us Malaysian to give Anwar our full support and shooooo this SIL brag out from Permatang Pauh. Read here and here. 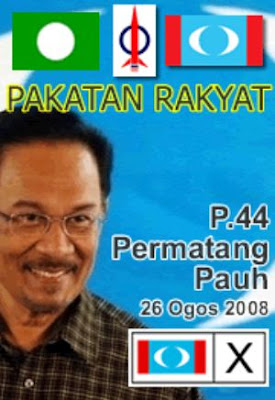 Yes, for all races generation and for Malaysia as a whole. We must unite to put DSAI into Parliment. This is to show Rakyat has power becos' Rakyat adalah kerajaan, bukan UMNO/BN. Do you know how much Rakyat money/blood have been sucked by them ? These money are supposed for Rakyat basic needs and economic growth. We need to have strong opposition so that gomen don't just do what they like. We pay taxes, feed them and they make us like fool. They raise 78 sen petrol price, now turun only 15 sen. Do you know why gomen stop subsidise our petrol ? So that they've more money mah...hehehe....yes...no ? Plsssss support DSAI in PP by-election. It's best for Malaysia future.