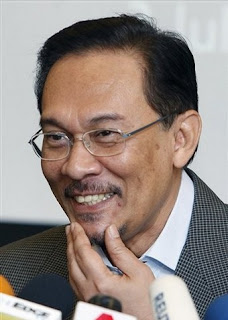 In a recent commentary,web portal Malaysian Insider focus on Arif Shah Omar Shah’s pull with the local population, and stay miles away from the sodomy charge against Anwar Ibrahim. This was the plan drawn up by Barisan Nasional and government strategists for the Permatang Pauh by-election.

So when BN Youth had a briefing in the operations centre on the eve of nomination day, Youth wing members were told explicitly not to touch the topic in house-to-house visits or in stump speeches. They were given basic information to counter the allegation that Anwar was stripped naked while in police custody and made to sleep on a cement floor.

But those morsels of information were only to be used in response to questions from the ground. The rationale was clear: surveys commissioned by the government showed that six out of 10 Malaysians had reservations about the sodomy charge levelled against Anwar by his former aide Saiful Bukhari Azlan.

Also, intelligence reports suggested that the largely conservative Malay community was uncomfortable with detailed discussions about the sexual activities of one of its favourite sons. And with Malays forming nearly 70 per cent of Permatang Pauh’s electorate, it seemed a prudent move to focus on the strength of BN’s candidate rather than the divisive sodomy allegation.

That plan was tossed out just after Saiful swore on the Quran at the Federal Territory mosque on Aug 15 that he had been sodomised by Anwar. Almost overnight, screens showing the 23-year-old taking the oath sprung up around the constituency, like mushrooms after a downpour.

Almost overnight, the focus of the campaign switched to Saiful and his allegation against Anwar. Like much of BN’s planning and strategy since March 8, there is an element of the right hand not knowing what the left hand is doing. Umno officials are still uncertain who ordered the screens to be put up. They are also wondering who decided to change the focus of the by-election campaign.

A government official told The Malaysian Insider: “Some party officials think that Saiful’s oath could have a bearing on how some older Malays vote. So the focus is now a bit more on Saiful.”

Khairy Jamaluddin, the deputy Umno Youth chief, zoomed in on Saiful in a speech on Wednesday night. He noted that Saiful had been described as a coffee boy and a volunteer by PKR politicians. He was curious why Anwar would take a coffee boy on a trip overseas. Khairy also said that Saiful had put himself and his family in harm’s way by swearing on the Quran.

“The burden from Saiful’s oath will not only be carried by him but also by his entire generation,” he added.

Other BN politicians have also been making the sodomy charge the focus of their speeches. But privately, they concede that this strategy is doing little damage to Anwar.

The latest ground reports show that he is far ahead of Arif Shah and will win the Permatang Pauh constituency handsomely,possibly by more than 15,000 votes.

------------------------
On Hanafi Ramli's chances for an upset victory,this is what he got to say, “So far, I think we have managed to attract 35 per cent of the BN voters and 35 per cent from the PKRside,” “I am here to promote national unity. PKR and BN cannot solve the problems. Only Akim can work towards solving the problems as we are not divisive,” he said. Read here.

On another note, not satisfied with the detention of a couple of PKR supporters who were said to be involved in a mishap with newsmen during the Permatang Pauh nomination day on 16 August 2008 and the detention of 2 PKR's Perak State exco said to be involved in corruption recently, now they are sending the police to raid Raja Petra's house looking for documents and any evidence related to the Statutory Declaration signed by the Burmese doctor from Pusrawi and probably other evidences related to RPK's SD on the Altantuya murder case. Read here and here.

Do you think by doing these stupid things will change the Permatang Pauh voters perception on Anwar................... 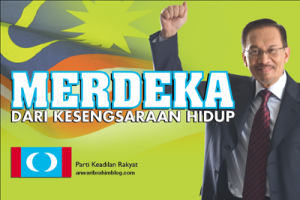 Berbar said he could vouch for the two Parti Keadilan Rakyat members who were arrested by police on Wednesday, saying they were part of the group that tried to protect Sairien and himself from the mob.

Berbar said this after he handed over a memorandum to Minister in the Prime Minister's Department Datuk Seri Nazri Abdul Aziz, calling for a stop to violence against pressmen.

How about badawi stopping his war of terror on the oppn.