Pat Lah's daunting task to win back his popularity...... 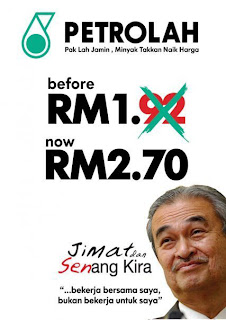 By declaring his intention to hand over power in mid-2010, beleaguered PM Pat Lah must now grapple with the question of how history will judge him. A cursory assessment of his successes and failures since coming into office in November 2003 is not a pretty picture.

Findings of a recent survey by the respected Merdeka Centre showed that his popularity has slumped to its lowest level, cynicism towards his administration is on the rise and public confidence in the security and justice systems has eroded further.

In a nutshell, the promised break with the past — particularly the excesses in public management and the browbeating of once-independent public institutions associated with his predecessor — has not materialised.

For his part, Pat Lah has maintained that the reforms he promised when coming to power will take time to implement. But analysts are sceptical and many wonder if the PM will be able to use the two years that he still has in office to fix the damage and burnish his credentials before handing over power.

“Pat Lah and Umno need to quickly realise that analog solutions won’t solve digital-age problems,” says a senior associate of Pat Lah. He concedes that the PM faces an uphill battle winning back the confidence he enjoyed in the early months of 2004 when his popularity was at its peak.

Ironically for Pat Lah, he faces the prospect of his legacy being defined by how his government treats its chief political nemesis Anwar Ibrahim. The sacking of Anwar from government and subsequent jail sentences a decade ago cast a permanent blight on Mahathir Mohamad’s 22 years in office.

Similar to events 10 years ago, Anwar faces accusations of sodomy and the police are widely expected to charge him in the coming days. Again, he is alleging that the accusations are part of a government conspiracy to prevent him from coming to power.

Abdullah’s problem is that many Malaysians think so too.

According to the recent Merdeka Centre survey, only 11 per cent of the Malays and Chinese, and 13 per cent of the Indians polled believe the allegations of sexual misconduct against Anwar.

This tricky tightrope walk in dealing with Anwar will come into sharp focus during the campaign in the upcoming by-election in Pat Lah’s home state of Penang. The by-election at Permatang Pauh, which is close to Pat Lah’s own constituency of Kepala Batas, is set to become a referendum of sorts on the Barisan Nasional government.

Still, some analysts believe Pat Lah’s problems stem from the reluctance of his ruling Umno party to accept the March 8 election result. This was when Malaysians from across the racial divide rejected the Umno-led BN coalition because of rampant corruption and its tone-deaf style of running the government. They note that Anwar’s political gains are simply because he has managed to tap this wellspring of discontent.

To arrest the government’s decline, Pat Lah will need to show more determination in his reform agenda and radically change Umno’s image as a monolithic organisation bereft of checks and balances.

The only way Pat Lah can boost his image is to drop the sodomy charges against Anwar,control price increases and listen more to the rakyat rather than his son-in-law Khairy.........