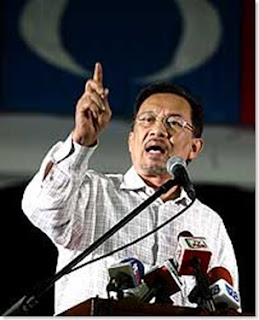 If Anwar becomes prime minister, will he be out to collect the scalps of those who engineered sexual perversion charges against him?

The Malaysian government’s sexual perversion case against opposition leader Anwar Ibrahim appears near total collapse, which if it happens would almost guarantee a humiliating climb down for the ruling coalition and may precipitate its departure from power as early as September. If that happens, several of the government’s top leaders and police officials could soon find themselves in the dock, charged with falsifying the charges against Anwar and opening up a vast array of other investigations.

Former Prime Minister Mahathir Mohamad appeared to signal the government’s defeat in a conversation with reporters after delivering a speech Saturday: “It can really happen,” he said. “I first wanted to dismiss this possibility but on studying the situation I feel that there is great danger. Of course, if this government loses power, it will not be in a position to dole out all kinds of goodies because at that time, the clout is gone.” In particular, the former prime minister said, lawmakers from the North Borneo states of Sabah and Sarawak could be expected to cross over to the opposition, and could well be followed by coalition MPs from peninsular Malaysia.

How would the scenario play out, assuming a new government is headed by Anwar and made up of three parties with a good deal of antipathy toward the current Barisan Nasional? Unless Barisan lawmakers figure out a way to somehow sue for peace, it won’t be pretty. A desperation attempt by the United Malays National Organisation to woo the fundamentalist Parti Islam se-Malaysia into an ethnic Malay coalition appears to have been rebuffed, in large measure because leaders of PAS, as the party is known, believe UMNO is irretrievably corrupt.

Anwar announced last week that he would stand for the parliamentary seat currently held by his wife, Wan Azizah Ismail, in a by-election to be held August 26. As the charges evaporate, it is likely that he will win that seat. He said he expects to take over the government on September 16. If that happens, as even Mahathir appears to expect, it seems reasonable to expect the formation of a Royal Commission to look into who trumped up the current charges against Anwar that he committed sodomy on a 23-year-old former aide. Many suspect that person to be Deputy Prime Minister Najib Tun Razak with the help of the attorney general, Abdul Ghani Patail, and the inspector general of police, Musa Hassan, both of whom were involved in similar charges in 1998 that brought Anwar down and resulted in his being imprisoned for six years until the sexual perversion charges were reversed by the courts as flawed. Anwar has already filed charges against the two law enforcement officials for falsifying the evidence against him in 1998.

It also appears reasonable to expect that the long-running court case involving the murder of Mongolian translator Altantuya Shaariibuu in October 2006 would be widened, with additional witnesses called to determine whether Najib and his wife were involved in ordering the murder, as has been alleged by Malaysian bloggers. Currently one of the deputy prime minister’s best friends and two of his bodyguards are on trial for the murder. From that point on, it depends on how many cans of worms a new coalition might wish to open. A previous royal commission, for instance, concluded that Mahathir’s government had engaged in widespread political fixing of the country’s courts. Mahathir, who broke with Anwar in 1998 and drove him from his position as finance minister and deputy prime minister, himself is under investigation in that scandal. It was Mahathir’s decision to push out Anwar that ultimately led to the charges of sexual perversion and abuse of power that led to the latter’s 1999 imprisonment. Will Anwar go after the octogenarian former prime minister?

The disintegration of the case against Anwar appears to have been picking up speed ever since he was arrested and charged last Wednesday with “carnal intercourse against the order of nature,” a crime punishable by 20 years in jail. Strangely, after more than a month of sensational claims that Anwar had raped the aide, Mohd Saiful Bukhairi Azlan, the charge was changed to one of consensual sex, although Saiful, who pointed the finger against Anwar, wasn’t indicted as a willing partner. Asked why, Home Affairs Minister Syed Hamid Albar said it was because he was the key witness and must be protected. The sudden switch raises the question whether prosecutors have been able to collect basic evidence or produce other witnesses.

Earlier, even before Anwar was pulled into court, Mohamad Osman Abdjl Hamid, the doctor at the Islamic Hospital Puswari in Kuala Lumpur who originally examined Saiful issued a sworn declaration reaffirming his medical report that found that Saiful’s anus had not been penetrated by anybody. In the document, the doctor said he had told Saiful to go to another hospital for treatment. Although bloggers have reported in Malaysia that Saiful went to four hospitals seeking a positive diagnosis, no additional diagnosis, positive or negative, has surfaced. Osman indicated in the declaration that he had been interrogated by police at least three times over the diagnosis. The physician later went into hiding with his family.

To Saiful’s contention that he had been raped between 3 and 4:30 pm on June 26 in a Kuala Lumpur flat, Anwar’s lawyer, Sankaran Nair, has offered an alibi that at that time the opposition leader was meeting in that flat with a former banker and an economist along with several other friends to discuss economic strategy and that those involved in the meeting had all been questioned by police.

Equally damaging for the prosecution’s case, Malaysia Today’s editor, Raja Petra Kamarudduin, charged that a top police official, Senior Assistant Commissioner Mohd Rodwan Mohd Yusof had met with Saiful three days before the charges were filed in room 619 of the Concorde Hotel, and that Rodwan and Saiful spoke on the telephone at least eight times before Saiful went to Hospital Puswari to report the supposed rape. Asked by the Oriental Daily newspaper in Kuala Lumpur about the Malaysia Today report, Rodman said he was not prepared to respond.

Sivarasa, Anwar’s lawyer, also issued a statement saying that “In [the] 1998-1999 trials, Anwar experienced the phenomenon of fabrication of DNA evidence. We had SAC Rodwan illegally removing DNA samples from forensic custody. In cross-examination of the prosecution’s witnesses it was exposed that DNA taken from blood samples was planted” on an infamous mattress that the prosecution dragged daily into court in the earlier trial, only to decline to put the mattress into evidence.

If the youth had indeed been raped on June 26, Malaysia’s indefatigable bloggers are asking, why didn’t he immediately report the fact to doctors at Hospital Puswari instead of waiting for two days, on June 28, where evidence of penetration could be assessed and DNA could be extracted to identify his attacker?

Raja Petra, whose Internet publication has led all the media in reporting the flaws in the prosecution’s investigation, has also reported that Saiful met with Najib prior to the filing of the charges. Najib first denied he had ever met the youth. Then, when pictures surfaced of him with Saiful, he said he had only met him for career counseling.

So there is a mess. Compounding UMNO’s problems, district elections are underway, local and regional officers are proposing corruption charges against Prime Minister Ahmad Abdullah Badawi, a growing rebellion is underway against the leadership because of drastic losses in the March 8 national elections. Nobody seems to be in a mood for compromise. Investors, take care.

--------------------
Changes are good as the BN gomen is known to be arrogant and corrupt. We witnessed over 5 decades of mis-management of the country's wealth that only benefits on a small circle of UMNO clowns and cronies. Just name any UMNO or BN leaders that isnt corrupt..........

UMNO will go all the way to humiliate Anwar and try their very best to deny him from entering Parliament. Today Sharizat Abdul Jalil said that wanita UMNO has declared "jihad" against Anwar to stop him from achieving his dream and personal glory. Read here.

However,I wonder whether Sharizat Abdul Jalil and wanita UMNO understands what "jihad" really signifies? Probably they should refer to their imam hadari first...................

Anwar, being the trend-setter of Malaysian Political Race used someone else mouth to shout. He used Khalid Ibrahim's mouth to yell like hell on Uitm issue.

As always, trend comes and fades.