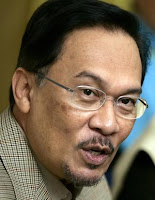 PKR leader Anwar Ibrahim pleaded not guilty to the charge of having carnal intercourse against the order of nature at the Sessions Court in Jalan Duta court complex this morning.

"This is a malicious slander and I'm not guilty," he told Sessions judge SM Komathy.

The prosecutor did not opposed bail and proposed bail be set at RM20,000 and that Anwar be required to surrender his passport.

The charge, preferred following a complaint by 23-year-old Mohd Saiful Bukhari Azlan, carries a punishment of up to 20 years' imprisonment if found guilty.

He was charged with having committed sodomy on Saiful under section 337B of the Penal Code on July 26 between 3.01pm and 4.30pm at Unit 11-5-1 Desa Damansara Condo in Bukit Damansara, Kuala Lumpur.

Earlier today, Anwar arrived at 9.45am to chants of 'reformasi' from 200 supporters who have gathered outside the court complex. He was accompaned by his wife, Dr Wan Azizah Wan Ismail and eldest daughter Nurul Izzah.

He said should Anwar was denied bail, Wan Azizah would be the coordinator of the Pakatan council.

The de facto PKR leader, who was in a greyish jacket and light purple shirt, appeared relaxed. He smiled and talked to some of his supporters and Pakatan leaders inside the courtroom.

He told Tenaganita director and PKR leader Irene Fernandez that this court case would be the "final round".

There are also other lawyers who are holding watching brief for Bar Council and Washington-based Human Rights Watch, Paris-based International for Human Rights and Bangkok-based Forum Asia.

The police have put the entire court complex under heavy security, with police personnel lining up along the roads leading to the complex, as well as within the complex itself.

At least seven police and Federal Reserve Unit trucks are seen in the court parking area.

Similarly the police have also mounted several roadblocks in certain parts of the city, causing massive gridlocks in all main arteries that enter the city centre.

The police are also limiting public access to the courtroom - Sessions Court 1 - in which Anwar will be charged. All members of public are also asked to register themselves before entering the courtroom.

Had bail been denied, as was the case when he was charged 10 years ago, Anwar would be detained and will have to fight his Permatang Pauh by-election behind bars.

The judge set mention of the case for Sept 10.

Interestingly, Raja Petra Kamaruddin has another suprise in store....Read here.