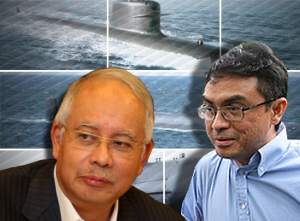 A right hand man of defence analyst Abdul Razak Baginda, Jasbir Singh Chahl, is the first Malaysian to be subpoenaed as witness in the Scorpene case hearing curently underway in France.

“Jasbir Singh is a central figure in the negotiation and procument process.

Gabriel claimed that Jasbir would be required to cooperate and reveal information on what had transpired in the Scorpene submarine deal that was purchased in 2002 via French submarine maker DCNS.

“He has confirmed that he would cooperate with the panel and the subpoena is being sent to his house,” Gabriel told the more than the 1,000-strong crowd present.

“The story will now come from the horse’s mouth,” Gabriel said on the purchase of two Scorpene submarines from French shipbuilding company DCNS in 2002.

Suaram lodged a complaint in November 2009 with the French courts asking for a judicial review into the Scorpene contract. The ongoing   judicial inquiry at the Tribunal De Grande Instance in Paris is a result of this complaint.

The inquiry is probing alleged corruption crimes and illegal bribes involving top officials from both Malaysia and France.

Back in 2002, the Defence Ministry was led by current Prime Minister Najib Tun Razak.

Gabriel also revealed that the two companies had used third countries within Europe to receive the payments.

This was done to avoid Organisation for Economic and Social Development (OECD) rules that made the transactions a crime.

“The payment to Malta included an invoice for Razak and (murdered Mongolian model and translator) Altantuya (Shaarriibbuu).

“Investigations are ongoing to determine whether it is Najib Razak or Abdul Razak Baginda,” added Gabriel.

Meanwhile Subang MP R Sivarasa revealed the names of others who would also be served with a subpoena notice.

Both Razak and Malim are Terasasi directors. Razak is also director of Perimekar with Mazlinda.

In a related development the prominent human rights organisation also rubbished allegations that they were tools of PKR especially due to the fact that many Suaram key members were PKR members as well.

“We are alleged to be political and not independent. We invite members of the opposition because they are consistent in addressing this issue (Scorpene scandal) in parliament and they are committed for the cause.

“We have no problem if anyone from BN or any other polittical parties raises the corruption in this scandal to the public without prejudice but no one from the BN government has done so. Zero reaction,” said Suaram’s executive director, E Nalini.

She said this in response to queries on Suaram’s independence as well as allegations that Opposition Leader Anwar Ibrahim was using Suaram to discredit the government.

She also brushed the detractors as “a drop in the ocean” that would not be able to side track Suaram from pursuing the truth.

“You can insult, slander and try to discredit all of us here, but, what is important for Suaram is the truth. Upholding human rights is our only priority,” Nalini said.-FMT

The first subpoena seeking testimonies for the French probe into alleged kickbacks to a Malaysian political figure over the the 2002 purchase of a pair of Scorpene submarines, has been delivered last night, according to NGO Suaram.

"As we sit at the dinner tables right this moment, a subpoena is on the way to Mr Jalbir Singh Chahl's house.
“The case is moving forward more concretely," announced Suaram coordinator Cynthia Gabriel (right) who is spearheading the case for the human rights NGO.

Speaking at a fundraising dinner for their project ‘Ops Scorpene’, Gabriel said Jasbir was Abdul Razak Baginda's right hand man in Perimekar, the company that acted as middleman for the procurement of the submarines, through which over RM500 million in alleged “commissions” have been channelled.

Suaram was the interested party that lodged a complaint with the French judiciary to start the probe into the alleged illegal kickbacks on the sale of the submarines from French shipbuilder DCNS.

The French courts had ruled that the NGO has locus standi to initiate the proceedings as a body concerned about transparency and corruption in Malaysia.

Abdul Razak himself was the close confidante of then defence minister and present prime minister Najib Razak (left). The former stands accused of accepting millions in "consultancy fees" on Najib's behalf allegedly to 'grease' the deal.

Gabriel said that Jasbir was privy to a lot of information about the deal, as he was point-man in the negotiations between DCNS and Perimekar.

"He has confirmed his cooperation with us," Gabriel said further, expressing anticipation that his insider's testimony would shed more light into the Scorpene scandal.

Gabriel explained that Jasbir was the first in Suaram’s list of witnesses accepted by the French inquiry, with other subpoenas to follow suit.

She however explained to the audience that the proceedings is still at the preliminary stage, akin to the initial stage of opening an investigation paper, albeit performed by the French judiciary and not by law enforcement authorities.

The French judiciary had agreed to follow through with the inquiry after France's state prosecutor dropped investigations into the complaint, some claim due to political and diplomatic pressure.

The dinner that was attended by over a thousand donors, supporters and volunteers involved in efforts to uncover the alleged corruption behind the deal, dubbed ‘Ops Scorpene’, saw over RM200,000 raised for their French probe war chest.

The funds were raised through ticket sales and auctions.

Ten exclusive green T-shirts with artwork depicting the Scorpene saga were sold off ranging from RM300 to RM2,000 each, while a painting by local political cartoonist Zunar (right) was auctioned off for RM5,000.

Gabriel explained that the funds will mostly go to the retainer for their French lawyers William Bourdon and Joseph Breham, which can run up to RM12,000 a month, as well as legal, translation, travel and other expenses.

She said that in line with Suaram's policy of transparency, the full accounting of all funds collected and spent are listed in a financial report on their website.

Bourdon made a cameo appearance during the dinner via a long distance phone call, expressing his regret that he cannot be with the audience last night.

He said he is confident that the inquiry will soon shed more light into the scandal and eventually bring those in the wrong to justice.

The case has already uncovered a continent-crossing trail that spans from France to Pakistan to Malta to Malaysian shores.

The Malaysian government deported Bourdon last year for allegedly abusing the terms of his social visit pass after speaking at a Suaram dinner, and has been allegedly denied a work permit to enter Malaysia in relation to the Scorpene case.

Earlier, Suaram executive director E Nalini hit out at those who disparaged the NGO and its efforts, vehemently denying the "false allegations" that the NGO is an opposition tool and had been paid to pursue the scandal.

"I take affront at these outright (allegations), which do not mention the support (we have received) from ordinary Malaysians."

She argued that they had invited opposition personalities to their function as they have shown consistent support for Suaram's fight against corruption, something she claimed BN politicians had shown  only lukewarm interest in.

"We are open to any support in the fight against corruption," she said, reminding that the fight is not Suaram’s but one that is on the behalf of all ordinary Malaysians interested in ending corruption.

All three spoke about the deplorable state of corruption in the country, whose perpetrators walk away scot free, urging the audience to vote Pakatan into Putrajaya in the upcoming 13th general election to put an end to this.- malaysiakini 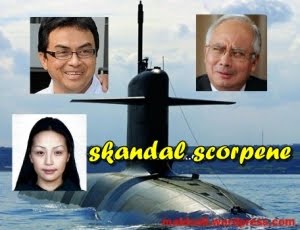