The admission by minister in the Prime Minister's Department Nazri Aziz that Najib and Rosmah's recent tour to three Western cities incurred RM3 million recalls a public expression of gratitude by the UMNO president to his wife last year for forgoing a family holiday in Italy.

Yesterday, replying to a question by Seputeh member of parliament Teresa Kok, Nazri said Najib was in London to attend a reception hosted by Britain's Prince Charles, and in New York for a meeting of a council called Global Science and Innovation Advisory Council.

A breakdown of the costs given by Nazri reveals shocking multi-digit figures.

For his two-day plus stay in London, the government forked out RM849,175. A similar length of stay in New York cost double that amount, at RM1,606,402, while his remaining days spent in Washington for a private visit, cost the government 452,985.75.

The short stay in New York, according to a Bernama report, was filled in by Rosmah with a meeting with US Girl Scouts head Anna Maria Chavez and a hospital walk around.

In Washington, the couple attended the graduation of their son Nor Ashman who completed his Bachelors of Science in International Affairs at Georgetown University.

But Nazri's claim that the trip ended in Washington has been disputed by Teresa (left), who cited "aeronautical evidence" obtained from a flight plans website, which shows that his plane had travelled from Washington to Milan, Italy, on May 20, a day after arriving in Washington.

"The entourage remained in Milan for four days. The flight plan also shows the plane had stopped over in Dubai and then returned to Kuala Lumpur," said Teresa. (A simulation of the plane's journey has been recorded by the air traffic website Flight Radar 24).

"Why did Nazri lead the Parliament to believe, in the Parliamentary reply, that the contingent had stayed in Washington for almost five days?," she further asked, and demanded Najib to declare his travel mates to Milan and whether more taxpayers’ money had been used.

Teresa also questioned the use of the official aircraft, 9M-NAA, for private purposes.

Urging the government to explain the half-a-million ringgit bill for what Nazri said was for the accompanying officers' trip in Washington, she asked whether the Milan-Dubai journey was a vacation trip concealed from the public.

"Can the PM justify using the nation’s official aircraft for his family and staff holiday?" she asked.

FUNDED BY TAXPAYERS ... This Airbus plane is the official air transport to carry the Agong and the PM, codenamed 9M-NAA

Upon his return from a European trip in July last year, Najib publicly thanked his wife Rosmah for allowing to forgo a family holiday in Italy "for the sake of Malaysians back home".

According to a Bernama report, Najib was to spend a week holidaying in Italy.

This was not the first time that Najib and Rosmah's trip expenditure has come under scrutiny in the parliament.

Last year, it was revealed that the government spent more than RM17 million for trips made by the couple since 2008, with one-third of the amount being spent in the first six months of 2011.

The parliament was also then told that RM134,317.76 was spent to cover Rosmah's expenses during her trip to Saudi Arabia, Oman and Bangladesh, following criticism that she had spent RM140,000 for an overnight stay at Dubai's luxury hotel Atlantis.- harakahdaily 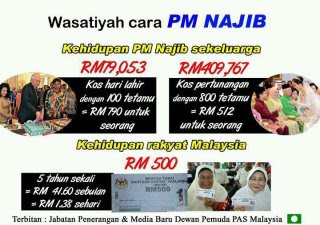