Questions over Health minister and MCA deputy president Liow Tiong Lai's RM24,200 bid for the car registration number 'WWW15' continued to dominate online social media with a claim that he has been exempted from settling the amount.


Liow claimed that the number plate was free according to an 'official notification' from Road Transport Department (JPJ).

“There is no payment involved. Any further Qs pls refer to RTD [JPJ]. TQ,” he twitted.

Earlier, the Department published names of those who were successful in the bidding for popular car registration numbers under the 'WWW' series. Although Liow's name has been listed, he denied that it was for him, insisting it was for his ministry's new official car. Grilled by journalists, he further claimed that he did not know the cost when he decided to join the bidding frenzy.

However, Liow’s claim was disputed by an official from JPJ who told Chinese daily SinChew that a bidder must pay the amount.

Since the WWW15 was tendered under Liow’s personal name, the minister would be the party liable for winning the 24,200 bid, he added.

But Liow’s latest remark set off another round of strong reactions from netizens.

“Even the Sultan needs to pay, since when a MCA minister has more privilege than a Sultan?” ran one comment, referring to the Sultans of Johor and Kedah who would be paying RM520,000 and RM220,000 respectively for their numbers of choice.

“Of course it’s free, it’s the people’s money. Tender also can be free, do you still want to tender?” quipped another.

“Can only guess that MCA buddy Kong Cho Ha came to Liow Tiong Lai's rescue by waiving the RM24k he has to pay for WWW15? And that makes it OK?” wrote Pua on his Facebook. 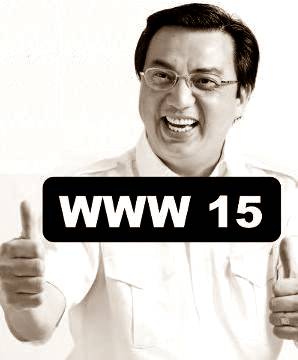 Liow: I got my number plate free of charge

A day after fumbling over reporters’ queries on the WWW 15 number plate which he had bid for, Health Minister Liow Tiong Lai now says that he did not pay a sen for the prized number.

In a tweet late today, Liow said that he had received word from the Road Transport Department (RTD) that he need not pay the RM24,200 bidding price he had offered, as the number is “free”.

“I have received official notification from RTD that the number plate is free. There is no payment involved. Any further questions, please refer to RTD. Thank you,” he tweeted.

This, however, contradicted a report by China Press today, which quoted the Federal Territory RTD spokesperson as saying that everyone who bids for the plate numbers needs to pay for them.

He said that ministers can request for number plates for free from the Transport Ministry, but this does not apply for ‘hot numbers’ like the one for which Liow had made a bid.

Bidders have to pay a deposit

He added that even the sultans need to bid for such numbers, as did the Johor Sultan who paid half a million ringgit for the number plate WWW 1.

The spokesperson also told the daily that it is unlikely for bidders to be in the dark about the amount they had bid, as all bidders will need to pay 50 percent of the the bidding prices as deposit.

Liow has since been panned for being clueless over his own bid, when asked by reporters yesterday.

He initially claimed that he “does not know the cost” and that his officer had handled the matter for him.

MCA chief Chua Soi Lek who was also present at the press conference had also stepped in to assist Liow in the Q and A session, by saying it is a matter of "from the left hand to the right hand”.

A Road Transport Department (JPJ) officer revealed that Health Minister Liow Tiong Lai can write an appeal letter to the Transport Minister or JPJ Director-General to waive his bidding payment for the 'WWW15' car plate number.

According to a report in today's Sin Chew Daily, a Federal Territory JPJ public relations officer explained that once Liow (left)succeeds in his bid for the plate number he can write in to get his payment waived.

"Only the Transport Minister and Director-General have the power to approve his request.

"Paying or not depends on whether the owner of WWW15 plate number has written to request for waiver," he was quoted as saying by the Chinese newspaper.

The current Transport Minister is Kong Cho Ha, who is also MCA secretary-general, while Liow is MCA deputy president.

Its still not known whether or not Liow has written to the authority for the waiver.

Yesterday Liow revealed that he had received word from the Road Transport Department (RTD) that he need not pay the RM24,200 bidding price he had offered, as the number is "free".

The response came after Liow was panned for failing to answer reporters' queries on who had paid for the bidding of the plate number, which he claimed was for his new official car.

He initially claimed that he "does not know the cost" and that his officer had handled the matter on his behalf.

He also failed to give a convincing answer on the need to bid for the number, saying that his grandfather is also using the same number but at the same time he is "okay with any number".