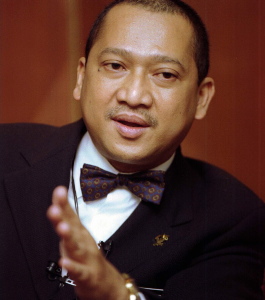 Even bottles can topple a gov't, says Nazri...

A government that does not enjoy the support of the people can be toppled with water bottles, said de facto Law Minister Mohd Nazri Abdul Aziz.

"Salt and mineral water, do not underestimate (these). Evidence has shown that governments that fell in Egypt, Tunisia and Libya were brought down with just handphones... handphones!

"Do not underestimate bottles. The fact is (a putsch) can be done even with bottles, for if the people are not behind it, a government may fall," he argued when replying a supplementary question from Lim Kit Siang (DAP-Ipoh Timor).

Lim had asked Nazri to explain why the government accused the  Bersih 3.0 rally as an attempt to topple the government when the participants only carried salt and mineral water bottles.

"Can salt and mineral water topple a government? Is the BN government that weak?" sniped the DAP parliamentary leader.

The government had repeatedly accused the Opposition and Bersih organisers of attempting to cause an Arab Spring-style revolution to oust the BN government, which has been in power for over 50 years.

Pakatan Rakyat and Bersih have vehemently refuted the allegations and demanded proof of the government's claim.

Well over 100,000 people had gathered near Dataran Merdeka in Kuala Lumpur on April 28 to participate in the Bersih 3.0 rally to call for free and fair elections.

There were thousands more who participated in smaller rallies in other states throughout the country and in major cities overseas.

The Kuala Lumpur leg of the rally saw violence as police and protestors clashed after the barricades surrounding Dataran Merdeka were breached.

In an answer to another question from Opposition Leader Anwar Ibrahim, Nazri dismissed suggestions that the government must act on an interim report by an international fact-finding mission on Malaysia's electoral system.

"Most of the issues they mentioned were already brought up during the Bersih rallies one to three and was discussed in both Dewan Rakyat and Dewan Negara," he said.

He added that a parliamentary select committee was already established provide recommendations to improve the electoral system, some of which had already been implemented by the Election Commission.

While expressing his respect for members of the mission - which includes law makers and academics - Nazri stressed that their findings were merely advice, which the government was not bound by.

"But we cannot take in every view out there, as this would cause a 'caca-merba' (patchwork) situation," he said.

The mission had made several recommendations during a meeting with Nazri. The mission was commissioned by Anwar, in his capacity as opposition leader.- malaysiakini

The federal government has proven that it cannot substantiate its claim that Bersih 3.0 rally amounted to an attempted coup, said DAP parliamentary leader Lim Kit Siang.

In a press release today, he said this was proven when de facto law minister Mohd Nazri Abdul Aziz (left) told the Dewan Rakyat today that Bersih supporters could have toppled the government with “salt and water bottles”.

Nazri had said this when replying Lim during Question Time.

Lim had asked the prime minister to explain why the government had described the Bersih 3.0 rally on April 28 as being a coup attempt when participants were only carrying salt and water bottles.

Lim described Nazri’s reply as a “total disappointment” as there were no attempts to back up the government’s claim against Bersih.

“The secret is now out - the prime minister and the three former (police chiefs) have absolutely no evidence whatsoever to back the wild and reckless allegation that Bersih 3.0 rally was a coup attempt to topple the government by force.

“But, the Najib government is mortally afraid of ‘salt and water bottles’ because these can topple governments which have lost support of the people.”

In view of government’s inability to back its claim Lim said the premier and the former police chiefs should publicly apologise for their “baseless” allegation.

“Secondly, the government should dissolve the Hanif independent advisory panel inquiring into Bersih 3.0 violence and brutality,” he said.

However, he speculated that placing Hanif in the panel may include an ulterior motive - to prove that the Bersih rally was indeed a coup attempt.

Critics have pointed out that Hanif is not fit to lead the investigations because he had taken a stand against Bersih after the rally.

Lim added that the government should instead provide full support to the Human Rights Commission’s inquiry into alleged violence during the Bersih rally.- malaysiakini 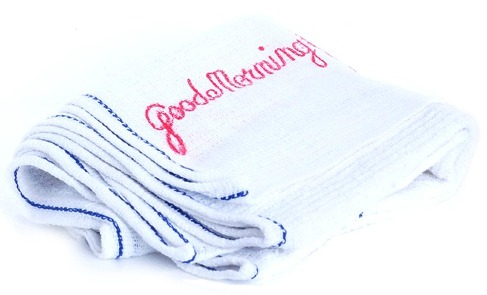 Salt and water bottles a tool to bring down govt...

Salt and mineral water bottles can be used as tools to overthrow governments, said Minister in the Prime Minister’s Department Nazri Abdul Aziz.

He said this to Ipoh Timur MP Lim Kit Siang during a question and answer session at Parliament today.

Earlier, Nazri told the Dewan Rakyat that Bersih 3.0 was an attempt to overthrow a democratically elected government as what was done in Tunisia, Egypt and Libya.

“They (Bersih 3.0 organisers) chose Dataran Merdeka to gather due to its historical significance despite being offered the Stadium Merdeka to hold the rally,” said Nazri.

Later, Lim stood up and accused Nazri of making baseless accusations and urged him to retract his statement.

“How can mineral water bottles and packets of salt be used to overthrow our government?” asked Lim.

Nazri pointed out that in the Arab Spring, the people only used mobile phones to garner support and kick out their unpopular leaders.

On April 28, tens of thousands marched at the nation’s capital to demand for free and fair elections.

However, the rally turned violent after several protesters breached a police barricade near Dataran Merdeka resulting participants and journalists being assaulted by the police.

Nazri said that the violence that happened in Bersih 3.0 was caused by the latter’s stubborn decision to march to Dataran Merdeka despite being offered alternative venues.

“So when the violence happened, they can accuse that the Malaysian authorities are bad,” he said.

The minister added that the government was committed to conducting free and fair elections in the country and its sincerity was proven through the formation of the Parliamentary Select Committee on Electoral Reforms last year.

“The government will never use unconstitutional means to remain in power,” said Nazri.

Lim: The secret is out


In a press statement issued later, Lim said that Nazri’s response in parliament showed that the government had no evidence at all to back its claims that the Bersih rally was a coup attempt by Pakatan to topple government.

Instead, he said, what was evident was that the Najib government was afraid of “salt and water bottles” for fear of having lost support of the people.

“Nazri could not give even an iota of evidence to substantiate Najib’s allegation and went completely off tangent into a tirade against Bersih 3.0 and Pakatan Rakyat,” said Lim.

“The secret is now out – the prime minister and the others have absolutely no evidence whatsoever to back the wild and reckless allegation that Bersih 3.0 rally was a coup attempt to topple the government by force, but the Najib government is mortally afraid of salt and water bottles because they can topple governments which have lost support of the people,” he added.

The veteran DAP parliamentarian said that the challenge to Najib was to find out why he was  losing rather than gaining popular support despite “all the big talk of transformations in various aspects of national life in the past three years”.-FMT 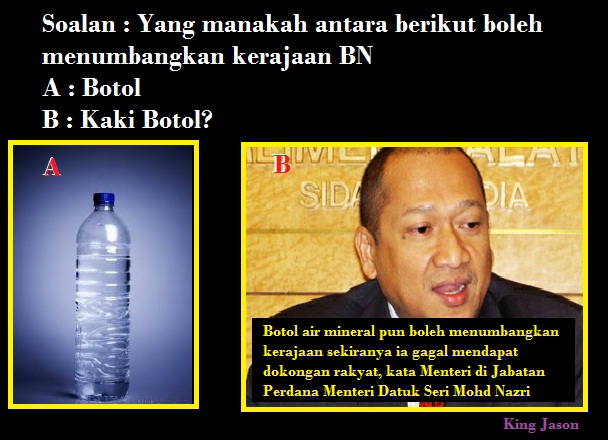