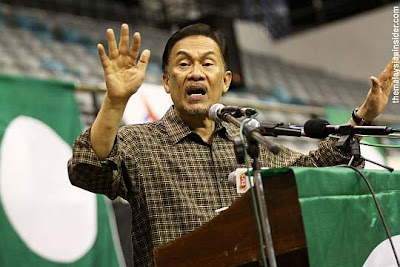 Opposition Leader Anwar Ibrahim is confident that Pakatan Rakyat will take over Putrajaya in the coming general election with a simple majority and the power transition would be a peaceful one.

This is because BN leaders, including Prime Minister Najib Abdul Razak, would not want to risk their future in order to stubbornly cling to power should they lose, he said.

Anwar's response was seen as an attempt to reassure the fence-sitters after both former prime minister Dr Mahathir Mohamad and Deputy Prime Minister Muhyiddin Yassin warned that the opposition might cause chaos if they lose in the next general election.

The same message was echoed by Information Minister Rais Yatim two days ago.

"By and large I think they know the people would not condone this... I think sanity will prevail because they know there will be major risk. If you create (riot), your life will be at stake.

"No country has seen a transition election stolen from the people that leaders can get away free," he told a dinner held by the Foreign Correspondents Club of Malaysia (FCCM) in Kuala Lumpur last night when asked whether riots would break out if BN loses the election.

"Unless, he (Najib) is dictated by Mahathir," added Anwar, tongue-in-cheek.

Anwar also promised no "retribution of justice" against BN leaders should Pakatan come into power.

"We want to rule, not take snipes at the opposition. If you are obsessed with the past, you will never succeed."

'Give us at least a 10-seat majority'

The former deputy prime minister appeared upbeat on Pakatan's chances in the upcoming polls, which could be called in the next few months.

"I'm absolutely certain that we'll perform much better (than 2008), enough to secure a simple majority in Putrajaya," declared a beaming Anwar.

However, like Najib, he warned voters against producing a hung parliament, but instead deliver at least a 10-seat majority to Pakatan.

"Anything exceeding 10 (seats) will be quite alright, less will be problematic in the sense they (BN) will be trying to harass (Pakatan MPs)," he said.

In other words, Pakatan will have to win a minimum of 116 out of the 222 parliamentary seats, which is an increase of 34 seats compared to its haul of 82 seats in the 2008 general election.

Najib had issued a similar warning during an earlier dialogue with FCCM members that a hung parliament would spell trouble for the nation, but he did not disclose how many seats BN has set its sights on.

He, however, conceded that regaining BN's two-thirds parliamentary majority would be "challenging".

Meanwhile, on his recipe to put Pakatan in Putrajaya, Anwar predicted that the coalition will make major inroads in Johor and Malacca, especially among the Chinese voters who are deeply hurt by extremist groups such as Perkasa, which he claimed is endorsed and funded by Umno.

The Indian community, he said, is angered by the insults and abuses inflicted by Umno-linked right-wing groups on Bersih co-chairperson Ambiga Sreenevasan, leader of the movement campaigning for free and fair elections.

In Sarawak, Pakatan has been working extremely hard over the past four years after it lost miserably in the last general election, winning only one parliament seat out of 31 seats.

According to Anwar, the anti-establishment Radio Free Sarawak is very popular in the Iban longhouses, which Pakatan hopes to score gains among those from the majority ethnic group.

As for Sabah, the emergence of new state-based opposition parties, he said, will bring surprises that will eventually change the political landscape in the state.

Nevertheless, Anwar conceded that the main battle will be over the Malay voters, whom both PKR and PAS are doing their best to win their support. 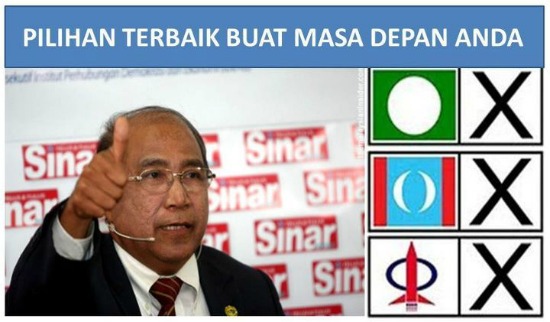