Health Minister Liow Tiong Lai was today overwhelmed by a barrage of questions over his RM24,200 bid for the WWW15 vehicle number-plate, which at times left him fumbling for answers.

At a press conference at the MCA headquarters in Kuala Lumpur, Liow said he was unsure who had forked out the money, but was certain that his ministry did not foot the bill.

While claiming that he did not place importance on specific digits, he struggled for answers when asked why such large sum of money was spent for the number-plate.

He skirted the question and said he did not know what the cost was when the bid was made.

Liow repeatedly stressed his "eligibility" as a minister to obtain such number-plates and that his officers and Road Transport Department (JPJ) officers had handled the matter.

Occasionally, MCA president Dr Chua Soi Lek had to step in to assist his deputy, explaining that the money was just going "from the left hand to the right hand" as all the money goes to a government consolidated fund from all ministries.

Liow yesterday defended the bid, saying his ministry was replacing his official car and there was a need for a new number-plate.

Earlier today, Chinese newspaper Sin Chew Daily had quoted an unnamed officer as saying that the Treasury has never allocated any funds for ministers to submit bids for a number-plate for their official cars.

Excerpts follow of the dialogue between Liow and reporters; these have been edited for language and brevity:

Journalist: Who paid the bid for the number-plate?

Liow: I mentioned yesterday that this is a government official car, and so ministers are eligible to have one number-plate, so the process is official. We are just going through the office and applying to the JPJ. JPJ is the one which processes the application.

Journalist: Is the ministry paying the bill? Who paid for this?

Journalist: That means you didn’t pay to bid for that particular...

Liow: Like I said, ministers are eligible for one number, so I didn’t exercise the option earlier, so since my ministry is changing the car, so they just changed it.

Journalist: So you are saying your officer handled this?

Chua: Usually this option is given to members of the administration both at state and federal (levels). So when you are in exco, you are entitled to officially bid for a number, or the state government will give you a number.

Journalist: Does that mean that when you are allowed to bid, you have to use your own money?

Chua: No, the government allows you to allocate a number, you can ask for a number. Of course, you cannot go and bid (for) number one lah.
Journalist: I’m referring to a Sin Chew report today, they interviewed an official from the Ministry of Finance, they said there is no such allocation for (any) ministry...

Any number, I’m using (words inaudible) my car is using any number ... it’s not important to me. So doesn’t matter whether I get the 15, or 200 or 1,000. It doesn’t matter to me. More important thing is the official car and we can use the car to serve the people.

Journalist: Why use your own name to bid?
Liow: Well I’m the minister of health...

Journalist: Is that a normal practice?

Liow: It’s a normal practice, yes, maybe it creates a lot of confusion; it’s better that I clarify and let the public know.

Journalist: But normally when we bid we need to pay to bid, right?

Liow: No, as explained earlier, this is the eligibility of a minister [sic], official car, that’s all. Even Lim Guan Eng has one of this kind of official car. So every… either state or federal as explained by my (MCA) president just now…

Chua: At the state level, the excos are also entitled to one car, err, to a number.
Journalist: Does the number 15 mean anything special to you?

Journalist: But you don’t have to spend so much money on this number if any (number) is okay.
Liow: I’m okay with any number, yes.

Journalist: But then, why spend RM24,000 on this particular bid?

Liow: No, just because it just happens that I need to change the car, that’s why I need a number.

Journalist: Why not retain the number-plate from the previous car?
Liow: No, they’ve changed (to) the new car, the old car is still there, I cannot change the number.

Chua: Those are official cars, those numbers don’t belong to him actually.

Journalist: What happens to those old official cars?

Chua:Another person will use it, he cannot just transfer the number just like that.

[Questions shift to the recent Merdeka Centre poll which revealed that the approval rating for Prime Minister Najib Abdul Razak had dipped, because of a plunge in Chinese support]

Journalist: Back to the car number-plate - some processes to clarify. What you are trying to say is if you buy a new car, you must bid for a new number-plate, you cannot use an old number-plate for a new car...

Liow: Because that’s old official car, I... umm, I’m, I’m…
Chua: You must understand, when it’s a ministry car, the car does not belong to him, you understand or not?
Journalist: Now that the number has been allocated, the RM24,200 comes from the ministry?

Liow: No, no, no, not allocated by ministry.

Journalist:Then where does it come from?

Chua: This is a question of the money from the left hand going to the right hand. Because all money goes to the government consolidated fund from any ministry.

Journalist: So you’re saying its just one ministry to another department?

Chua: Ahh... it’s just left hand to right, to be honest.
Journalist: Can I say number 15 is your favourite number?

Liow: I said earlier any number will do, I have no specific numbers. It just happened that I chose 15 - it doesn’t mean that it’s the favourite number.-

Liow ‘not sure’ who paid for his own bidding

No funds for ministers to 'buy' number-plates...

A Finance Ministry officer has clarified that there is no budget allocation for ministers to submit bids for a number-plate for their official cars.

Chinese newspaper Sin Chew Daily today quoted an unnamed officer as saying that the Treasury has never allocated any funds for such a purpose.

The officer was asked to respond to Health Minister Liow Tiong Lai's (left) explanation yesterday that his RM24,200 bid for the 'WWW15' plate number is for his new official car, as the old one is past its shelf life.

While saying the bidding exercise had been handled by his officers, Liow had skirted the question of who had paid the RM24,200 bill.

In a related development, former minister Fong Chan Onn has claimed that every minister is allocated a free number-plate for the official car.

The former MCA vice-president also revealed that there is no ceiling price for the number-plate as it is allocated free of charge by the government.

On another issue, former Perak menteri besar Mohamad Nizar Jamaluddin will give a statement to Johor police tomorrow over his postings on Twitter on the successful bid for the WWW1 car registration number by the Johor sultan.

Yesterday, Home Minister Hishammuddin Hussein said two police officers will record the statement from Nizar, who had agreed to give the statement.

“I was informed by Johor chief police officer Mokhtar Shariff that Johor police had received 39 reports over Mohamad Nizar’s statement on his Twitter account,” he told reporters, according to national news agency Bernama.

Anonymous #58437020 - When a leader wants to take up a public role, and desires it, he must be held ACCOUNTABLE. The days of sweeping the Rakyat queries under the carpet, ignoring phone calls, emails, playing tai-chi is long gone. Taking upon a public life is not about exhibiting your power and wealth. After COWGATE, etc etc. Malaysians have been exposed to how taxpayers money are spent. Let there be accountability in the highest offices. This is the very oath all of you have taken when you ask to be elected.

Anonymous #61972288 - Serious fool, even a 3 year old can speak a better lie. Right pocket left pocket? If u didn't bid for it, maybe the government will earn 20k extra from the genuine businessman or rich wealthy ppl who will use their own money to bid, this not only says corruption cause the ministry paid for a number that this fool doesn't need but it also stop the gov from earning extra! He said he doesn't know the price does that mean he told the ministry get me that number 15 at no cost? What happen to responsible spending? Why can't he just follow jpj queue like all of us just to get the next number that comes up?

Bluemountains -The minister is giving very confusing answers. He also said that he can have any number for the new car. Then he should instruct his officer to return the number and save his ministry RM 24,200. Just imagine the amount of medicine his ministry can buy with the RM 24,200. How about it, Liow ?
lim chong leong - Liow Tiong Lai is lying again. Firstly, there is no allocation. So someone must be paying for it. For someone to be paying for it, how can it be a ministry officers' or JPJ's matter? And if there is no allocation, then it is not money coming from left hand to right hand. So Chua Soil Lek is also lying. Even if there is allocation, wouldn't it have been better if some private rich individual bid for it and let the govt make some money from outside instead of taking money from left to right? 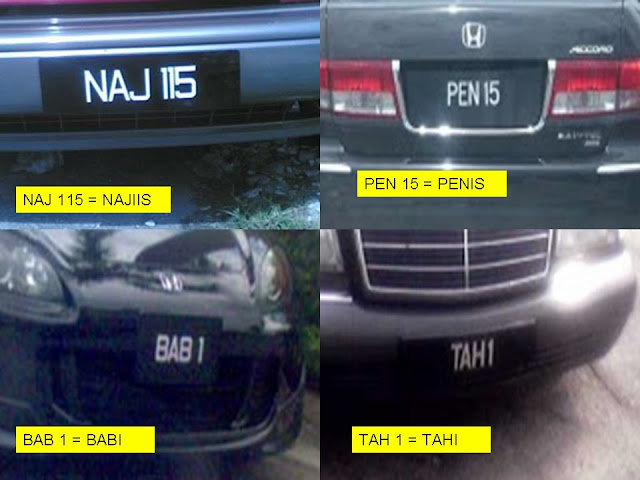