Selangor Menteri Besar Abdul Khalid Ibrahim said Syabas officials in a briefing to the state’s newly-formed water oversight committee had agreed that Selangor was not facing a water crisis with a critical reserve of two percent as previously alleged by the company.

In an interview with Malaysiakini, Abdul Khalid said the committee’s preliminary report found that the capacity to produce treated water for 35 treatment plants in the state stood at 4,960 million litres a day (MLD), 598 MLD or 14 percent more than what Syabas was distributing daily.

“Yes, (they agreed with the figures). They were in the room in the same meeting.

“There were only two people who did not come - the one we pay RM400,000 a month and chief executive officer Ruslan Hassan. All the top professionals came,” he said in a jibe at Syabas executive chairperson Rozali Ismail.

Syabas had in July proposed water rationing for certain parts of Selangor and Kuala Lumpur, citing that the water reserve in the state was at a critical level. This prompted the Selangor government to accuse the company of “manufacturing” a crisis and invoked its powers to step into the company.

However, Abdul Khalid admitted that some areas in Selangor were facing water disruption which he attributed to Syabas’s lack of distributive capacity.

“Places like Cheras and Petaling Jaya, because of the nature of the buildings, the water needs to be pumped so sometimes if you don’t reach a very high capacity then there will be a circulation shortage... That means we need diversion piping to bring the extra water to the area,” he said.

Abdul Khalid also acknowledged that the “crisis” had politically hurt the Pakatan-led state government, stating: “Of course it has a slight impact especially when you see an old lady having to carry a pail of water that would show that the Selangor government is so insensitive to the needs of the people, but I’m going to solve that part.”

Syabas had said that it was unable to upgrade its water services due to a lack of funds as the Selangor government has prevented it from raising water tariffs as stipulated in the 2004 agreement with the state government. The company has since taken the case to court.

Reciprocally, the Selangor government had argued that Syabas would not be bogged down in debt had it agreed to the water restructuring exercise which would see the state government buying over the assets of Syabas.

“If going by the agreement, the tariff by now would already increase by 75 percent... I stopped it because I said when we restructure, then we don’t need to implement the hike, it will be cancelled except for a maximum 12 percent increase over five years,” said Abdul Khalid.

Aside from water infrastructure problems, another issue that has hit the headlines since last month was the shortage of water in the state.

The federal government has argued that Selangor would face a water shortage without the Langat 2 water treatment plant, the price of which has been revised to RM6.225 billion and which is due to be completed in 2014.

However, Abdul Khalid said that the state is already implementing the water mitigation projects that would be completed by March 2013, thus increasing its capacity reserve from 14 percent to 19 percent or 851 MLD.

Furthermore, Abdul Khalid had argued that Syabas would do better to reduce its non-revenue water (NRW) as a means to increase treated water supply for consumers.

“Under our agreement, NRW should be at 20 percent from the 30 percent at that time, but now it has in fact increased to (close to) 33 percent,” he said.

According to figures provided by the Selangor Menteri Besar’s office, out of 4,333 MLD of water distributed by Syabas, only 2,944MLD is consumed by users while the remaining 1,389 MLD or 32 percent is wasted as NRW.

However, it is again a Catch-22 situation as Syabas says it cannot implement measures to reduce NRW without funds from tariff increases, while the state government insists on the water restructuring exercise.

Selangor’s water management was fully privatised by 2004 with the take-over of Pebadanan Urus Air Selangor (Puas) by Syabas, but it later became apparent that the move had created inefficiencies due to several separate companies managing the state’s water infrastructure.

Its distribution is handled by  Syarikat Bekalan Air Selangor Sdn Bhd (Syabas), a 70 percent stake of which is controlled by Puncak Niaga while the Selangor government holds the other 30 percent.

After the privatisation failed to meet expectations, the federal government had in 2006 introduced the Water Services Industry Act (WSIA) which would require state governments to buy back water assets from the various private companies.

“The idea was simply to restructure back in such a way that the operation of water will be under a special-purpose vehicle owned by the state so that it can be managed to provide better services.

“So I tried to implement it but until today I cannot implement it. This was the effort made by the federal government previously. If you want to be political it was the decision of the BN government to do it,” said Abdul Khalid.

In attempting to acquire the water assets for the restructuring exercise, the state government had offered a price tag of RM5.7 billion to the four companies in 2009, which was rejected by all of them.

Subsequently, Selangor upped the amount to RM9.4 billion in 2011, which was accepted by all the companies except Syabas.

Abdul Khalid added that he had conveyed to Energy, Green Technology and Water Minister Peter Chin Fah Kui that the federal government should go ahead with the restructuring and Syabas could go for international arbitration in the meantime if it was upset with the price. He further revealed that Syabas’ executive chairperson Rozali had also in principle accepted the terms.

Asked about the state government’s proposal to sack Syabas’s executive chairperson and CEO following the “water crisis” allegation, Abdul Khalid said it had yet to meet the company’s board of directors.

“Rozali is on the board and I don’t think he is wise enough to sack himself, but I’m putting in that if you are part of a listed company you have to adhere to corporate governance,” he said.

The Ijok state assemblyperson added that if it came to that and the board of directors refuses to sack Rozali, who is also Selangor Umno treasurer, a complaint would be lodged with Bursa Malaysia as they are acting against the interests of company shareholders.

Following the long-delayed water restructuring exercise, Syabas had been accumulating debt as the Selangor government refused to allow it to increase water tariffs.

Syabas has since taken the case to court, demanding up to RM1.2 billion in compensation up to 2010. It has thus far also owed up to RM2 billion to water treatment companies.

Abdul Khalid had since offered to meet Deputy Prime Minister Muhyiddin Yassin, who chairs the special cabinet committee on the Selangor water issue, to hammer out a solution for the water restructuring exercise over which negotiations since 2009 had failed.

The menteri besar had said that Selangor would accept the federal government’s insistence for the multi-billion ringgit Langat 2 water treatment plant on condition it was included as part of the water restructuring in order to obtain an overall picture over the necessary tariff adjustment required with the creation of the complex.

However, Muhyiddin had rejected the offer, with Putrajaya stressing that the Langat 2 project should be allowed to go ahead without involving it in the water restructuring exercise.

‘Politics only if it’s last resort’

Despite the stalemate with the federal government, Abdul Khalid, known for his strict corporate style of management, refused to put on his political hat.

“I cannot tell the people of Selangor, you are now in a fix - if you don’t vote the federal government out you are going to have to pay a 75 percent increase in water tariff. I thought I’m professional enough not to do this.”

“I did ask for advice if a referendum was possible but it is as hard as trying to get local elections because the power to agree to a referenfum also lies with the federal constitution which is controlled by the federal government.

“Of course if they try to push us to the wall, then we will have to go back to the people,” he said.- malaysiakini

Selangor water ‘crisis’: Why the BN hurry to give out contracts? 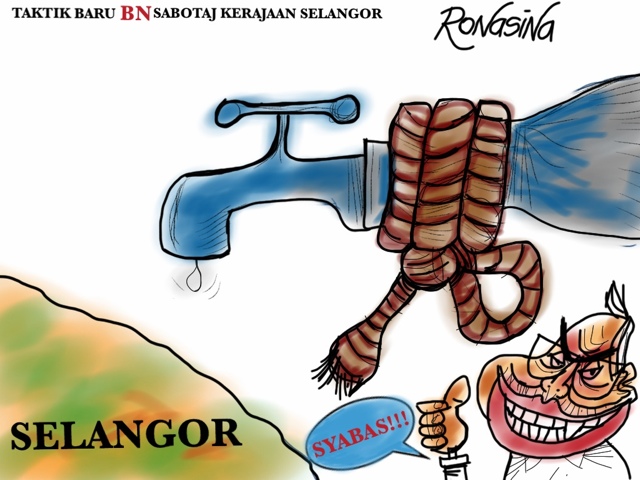