Guan Eng - The Gerakan duo should bark at their 'big bro' UMNO...

Chief Minister Lim Guan Eng has acidly applauded the “courage” of two Gerakan leaders in taking him on, when they have been unable to do this with Umno, their ‘big brother’ in the BN.

Referring to Gerakan national head Koh Tsu Koon (left) and state head Dr Teng Hock Nan, he said he has never heard them rebuke Umno for many actions that have hurt the feelings of the rakyat.

Even when Umno Youth members in Penang shredded Koh’s photo, he did not “scold” Umno, Lim noted.

“Koh spoke very bravely (yesterday). If only he had spoken like that against Umno, he would not have lost Penang (to Pakatan Rakyat in 2008),” he said of his predecessor who had administered the state for 18 years.

“Congrats to Umno, if Gerakan thinks I am an easy target and they can win back power in Penang.”

Koh’s “real tragedy”, he said, lies in the fact that he has trained other leaders after him to be afraid of Umno.

Lim also said that these leaders “only show courage to the DAP and Pakatan, but never to Umno”.
“They all have the same mode as Koh. They are brave in hammering DAP but are frightened of Umno.”

Lim refuted Teng’s accusation that he is “dictatorial, arrogant and power crazy” in his style of leadership.

“I want to ask: Is it because I am firm against corruption that I am labelled dictatorial? If the answer is ‘yes’, then I have nothing further to say.”

He was responding to questions at a press conference today, after signing a memorandum of understanding on cooperation between Georgetown and the city of Zhongsan in China.

At the Penang Gerakan 55th delegates conference yesterday, Koh and Teng had made several remarks to belittle Lim’s leadership, calling him a “twister king and mis-leader”.

Koh, now a federal minister, had warned that he is collating information to prove that Lim has misled the people over land deals and hillslope development in the state.- malaysiakini 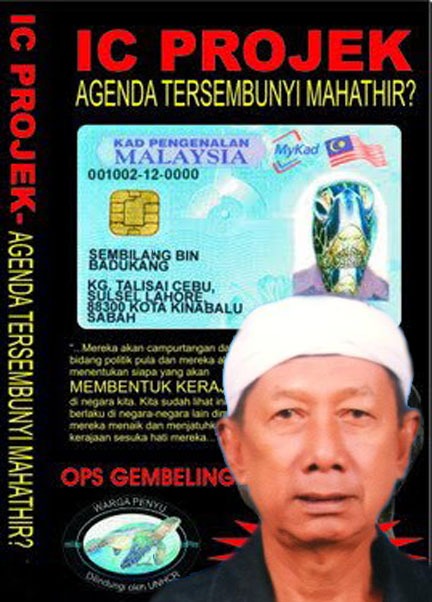 Dr Mahathir Mohamad has long been implicated in the Malaysian identity card (IC) being issued to foreigners in Sabah.

The first indication of this was seen when a foreigner in possession of a dubious IC was asked by a magistrate in Kota Kinabalu in September 1992 how he had obtained the document.

His answer was: “From a project called Project President Mahathir”.

The foreigner was jailed for two years but upon his release, was not repatriated. Instead, he managed to get registered on the Sabah electoral roll, where his name remains up to now.

Next, in 1998, there was a public hearing to decide if would-be new voters in the Likas constituency should be accepted if there were objections to their registration.

Sworn testimony at the same proceedings by one Hassnar Ibrahim revealed the fact that deputy home minister Megat Junid Megat Ayub had chaired meetings, at which it was mentioned that Mahathir had approved the ‘Project’. This had happened in the 1980s. The testimony was not challenged.

When Umno set foot in Sabah in 1991, it set up a task force. Its job was to look for foreigners and help them to get their IC dubiously, and register them as Sabah Umno members as well as in the state electoral roll - the purpose was to deny PBS victory in the next state election.

Do not forget MD Mutalib has written many books on dubious ICs being in the hands of hundreds of thousands of foreigners. He also wrote a book, ‘IC Projek Agenda Tersembunyi Mahathir?’ published in late 2006.

There was no response to this from Mahathir.

In 2006, I had submitted before the parliamentary select committee (PSC) on integrity, some detailed background leading to the extraordinary increase in Sabah’s population (see chart), implicating Mahathir in the deliberate issuance of dubious ICs to foreigners.

Mahathir was urged to rebut his role in this treacherous act by then Opposition Leader Lim Kit Siang who was the PSC deputy chairperson.

To date, Mahathir has not done so - instead he now publicly defends the extraordinary increase in Sabah’s population and citizenship for migrants.

‘Expel them to peninsula’

Mahathir has said these migrants were eligible to become citizens.

If so, the first question is: Why was the Sijil Akuan (letter of affirmation) falsified to state the birth of place as being in Sabah, leading to the code ‘12' being assigned for the MyKad?

Or, if the person is a naturalised citizen, why doesn’t their MyKad number bear the code ‘71', to show they were born outside Malaysia?

If they had been properly granted citizenship, when and where did they take their oath of allegiance?

Even if the federal government insists that these migrants in Sabah who were granted citizenship are Malaysians now, then the Sabah government still has certain immigration powers backdated to the formation of Malaysia.

It can invoke the Inter-Governmental Committee Report, Chapter III, paragraph 16, sub-paragraphs (f) (ii) and (iii) to ‘expel these new citizens to the peninsula.

After all, this was what it did to activist Harris Ibrahim few months ago, when he was refused entry to Sabah allegedly on security grounds.- malaysiakini

said most people will pay off their fiscal loans when they're due together with while not problems
A top debts nonprofit can possibly expect how many consumers using all of them with regard to help more than payday loan bad debts in order to 2x it. credit debt good cause shows near used the actual payday, increased appeal to lending products in 2010. Typically the nonprofit affirms four years gone by how many purchasers using them was initially minor.
pożyczki finan
sprawdź stronę
pożyczka na dowód
szybka pożyczka+legnica
pożyczka gotówkowa lucas