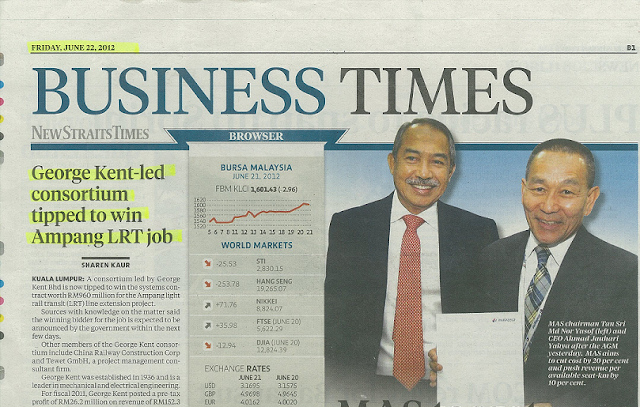 An official statement by Syarikat Prasarana Negara Berhad confirmed that the project would be handled by a George Kent-Lion Pacific joint-venture.

This was despite a recent PKR exposé which alleged that the George Kent-Lion Pacific JV (or Consortium) was unable to manage the project from both a technical and financial standpoint.

“Prasarana, the project and asset owner for the LRT Line Extension Project, would like to officially announce that the contract for Engineering, Procurement, Construction, Testing and Commissioning of System Works for the Ampang Line Extension Project is awarded to George Kent – Lion Pacific JV,” said Prasarana Group communication head Masnizam Hisham.

According to her, the JV was run by fully-local companies, and were “well supported” by “reputable local and international multi-disciplinary technical partners”.

She added that except for the access card component (which had not been tendered yet), Prasarana had awarded all its Line Extension Project contracts.

“In all, the construction cost for the entire project is below the original budgeted cost of RM7 billion,” she said.

Although the statement did not specify how much the George Kent Consortium’s contract cost, previous reports showed that the JV got the job for RM1.2 billion.

This amount was seen in a copy of a letter allegedly signed by the Treasury’s Procurement Committee (JPMK) under secretary Fauziah Yaacob and addressed to Prasarana group managing director Shahril Mokhtar.

Until now, Prime Minister Najib Tun Razak, who is allegedly closely-linked to George Kent’s bosses, could not confirm nor deny that the JV got the project despite the original tender was won by another company.

It was previously reported that the George Kent consortium was unable to handle the project’s specifications, according to a September 2011 technical evaluation report by Halcrow, an engineering consultant company.

The company, as pointed out by PKR, did not appear to have any previous rail-related experience, and that its largest project to date was worth less than RM40 million.


In an immediate response, PKR strategic director Rafizi Ramli – who exposed the contract’s details- said that he was speechless with the official announcement.

He said that given the exposés, he expected the Prime Minister to stop the project from going to George Kent.

“I have to say, I know they had all the intention to award this to George Kent, but I thought that Najib was more concerned about his popularity and how the public viewed him.

“…I thought our exposé, bringing this to the public would have swayed him to back off, but I clearly don’t think he cares.

He added that now that safety concerns were very valid, given George Kent’s performance according to Halcrow’s appraisal.

Rafizi also said that if Najib was willing to push this project through despite all the open attention, he wondered what more with contracts that were not as public.

The Malaysian Anti-Corruption Commission (MACC) has since started an investigation into the matter. It is not known how far they have gone.- malaysian insider

“The JV is 100 percent locally-owned companies and is well supported by reputable local and international multi-disciplinary technical partners, all with proven track records in their respective field of systems implementation expertise,” it said in a statement today.

Additionally, it said, some of the key sub-systems proposed also have synergy with Prasarana’s current operations, so in the long run Prasarana will benefit from reduced operating expenditures as well as cross-competency gains that will increase service efficiencies.

With the award of this work contract, Prasarana, the project and asset owner for the LRT Line Extension Project (LEP), has now awarded out all works contracts under the LEP except for the access card, which has yet to be tendered out.

“In all, the construction cost for the entire project is below the original budgeted cost of RM7 billion,” it said.

The project will extend the current Kelana Jaya and Ampang LRT Lines, with both lines meeting at an integrated station at Putra Heights, which for construction purposes has been placed under the purview of Ampang Line.

With the LEP, the Ampang Line will be extended by an additional 17.7km elevated track, starting from the current Sri Petaling station and serviced by 11 new stations and two future stations.

Extension of the Kelana Jaya Line will start from Kelana Jaya LRT station and run for another 17km running through 12 new stations before reaching Putra Heights integrated station.

The project also includes the purchase of new six-car trains for the Ampang Line.

Listed as one of the key initiatives under the National Key Result Areas (NKRA) blueprint, the LEP is a major effort by the government in transforming the country’s public transport services that has been entrusted on Prasarana.

Implemented under Prasarana’s campaign of Bringing Transport Convenience Closer To The People, the LEP would not only enhance mobility for people in the Klang Valley but also increase productivity and earnings for the people.

The project is regarded as a catalyst for economic development along the alignment especially at the new stations and its surrounding areas, creating business opportunities and new jobs.

Scheduled to be completed at the end of 2014, the project is expected to increase the daily ridership of LRTs by another 300,000 people daily. - malaysiakini 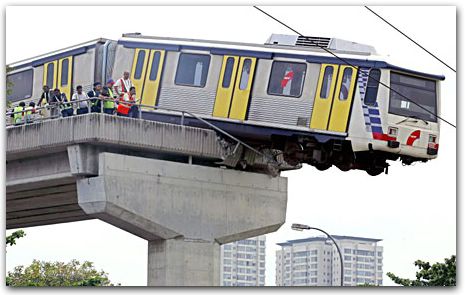