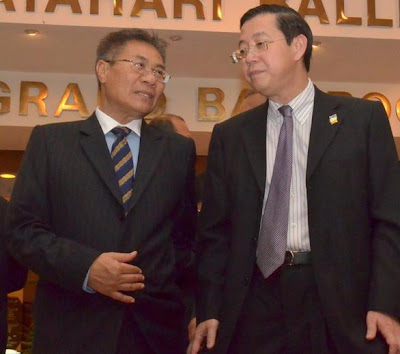 PKR Penang chief Mansor Othman says the blog posting about a PKR meeting, where Penang Chief Minister Lim Guan Eng was said to have been called arrogant, was deliberately spun to portray poor ties between PKR and DAP.

Mansor, who is also deputy chief minister I, denied at a press conference today that a PKR ‘strategic meeting' had taken place as reported in a little-known blog, which also claimed to have posted the minutes that were recorded.

However, he admitted, an unofficial meeting did take place, but the words spoken about the chief minister, such as ‘tokong' (deity) were used in a positive context and were meant to praise Lim (right).

"The discussions was not official, and were centred on party matters and related to preparations for the next general election," Mansor said.

"Words such as ‘cocky', ‘arrogant' and ‘deity' were taken out of context to give a bad image of the relations between PKR and DAP.

"For example, the word ‘tokong' was used in reference to the respect and esteem the people of Penang have for the chief minister," he added.

During a question-answer session later, Mansor further denied that he had ever said that Lim was cocky or arrogant.

“I don’t know where those words came from. I only used the word ‘tokong’, and most importantly, that was not done with ill intentions,” he added.

Mansor said the reports nevertheless will not “destroy the good relations” between the two opposition parties.

He added that the party is still trying to find the culprit responsible for the report.

“I think there is a leak, and we are still probing into that as we have yet to know who the culprit is,” he said.