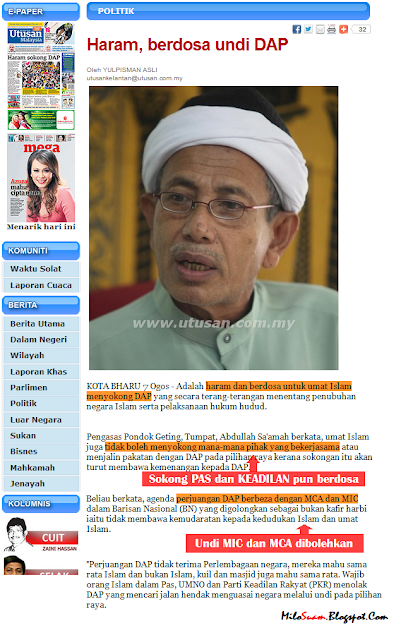 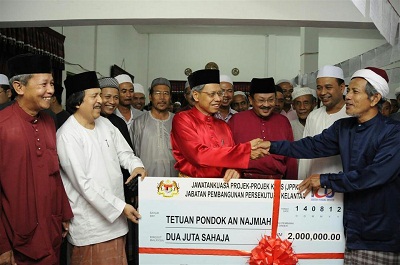 A religious teacher who last week labelled DAP as haram (forbidden) to Muslims has apparently received a RM2 million cheque for his school from the government.

Abdullah Sa’amah, the founder of Pondok Geting (Pondok An Najmiah) in Tumpat, was photographed receiving a mock cheque for the amount from Umno supreme council member Mustapa Mohamed.

Mustapa, the International Trade and Industry Minister and Jeli MP, on Tuesday uploaded a photo of the handing-over ceremony on Facebook.

In the caption, Mustapa explained that he was “visiting pondok Hj Abdullah to hand over a contribution of RM2 million. Four months ago, Muhyidding Yassin visited and promised help”.

The cheque was from the Jawatankuasa Projek-projek Khas (JPPK), Jabatan Pembangunan Persekutuan Kelantan (Special Projects Committee, Kelantan Development Department), and the recepient was named as “Tetuan Pondok An Najmiah”.

The photo was picked up by pro-opposition blogs. Roketkini.com and keadilandaily.com asked if the RM2 million was a “reward” from BN-Umno.

They noted that the money was given just a week after the comments by Abdullah Sa’amah were published in Umno-owned Malay daily, Utusan Malaysia.

They also claimed Abdullah is often a ceramah speaker at Umno events.

On Mustapa’s Facebook page, some of the comments posted were: “Janji Ditepati” (Promises fulfilled), the Merdeka Day theme this year and BN’s most recent election campaign slogan.

On the Aug 7, Utusan front-paged a report where Abdullah was quoted as saying that it was “forbidden and sinful” for Muslims to support DAP as the party openly opposed an Islamic state and the implementation of hudud.

He also said that Muslims should not support any of DAP’s allies as it would help the predominantly Chinese party, which he alleged was filled with “kafir harbi”(belligerent infidels), gain more power.

The religious teacher had also told the Umno mouthpiece that it was acceptable to support the MCA and MIC as the two parties recognised Islam’s pre-eminence. 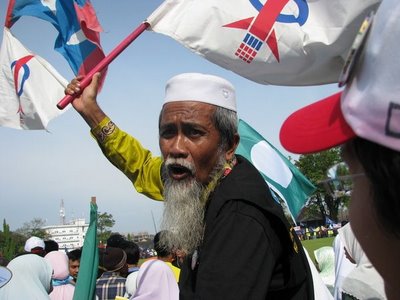