Malaysia lost 0.2km sq of its territory due to the stupidity of SUK .....

Malaysia had officially lost 0.2 km sq of its territory to Singapore coz of the letter below written by a 'bangang' SUK. Thanks to the acting SUK Johore En.Mohamad Sheth bin Saaid for the release letter to Singapore British Consulate in 1953. Read the letter below(click to enlarge) 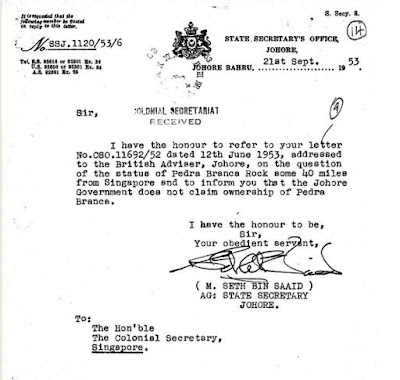 Malaysia had based its case on the weight of history, and Singapore on acts of sovereignty. Beginning as he did in chronological fashion, Judge Awn Shawkat Al-Khasawneh revealed that the former had made its case about its original title.

"Malaysia has established to the satisfaction of the court that ... in 1844, this island was under the sovereignty of the Sultan of Johor," he said.However the argument was enough for Malaysia to get Middle Rocks, one of two nearby rocky outcrops that were also under contention, by a count of 15 to one.

But the argument was not strong enough to win the case on Pedra Branca. Sovereignty of Pedra Branca hinged on what happened from 1953 onward, according to the ICJ judgment. Going by correspondence between both countries over Pedra Branca, as well as the actions taken by Singapore on the granite rock and the general lack of response by Malaysia to those actions, the ICJ decided that sovereignty had passed to Singapore. 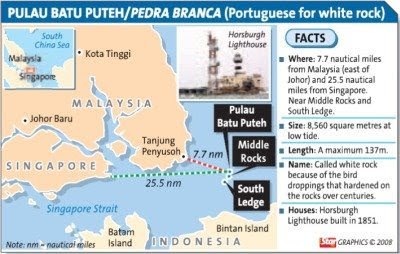 Rais said that the ICJ’s decision to award sovereignty of Pulau Batu Puteh to Singapore was based on the fact that from 1850 to 1953, Malaysia did not effect any action or grounds which could be accepted as proof os sovereignty. This acts of sovereignty could be in terms of occupation, conducting checks or supervision activities on the disputed island, explained Rais.

Rais said the ICJ also considered a letter writen by the Johor acting state secretary on Sept 21, 1953(above) which stated that “Johore government (did) not claim ownership” of the island.

Meanwhile, Karpal Singh described the loss of Pulau Batu Puteh as “disappointing” and added that Malaysia should accept that it has lost out to Singapore both in “dignity and kind”.

Rais and the gomen can say anything they wants but to us,the ordinary rakyat, rasa MALU......

Time for our Government to demand Singapore to get out of all our islands lighthouse or no lighthous, treaty or no treaty.

In another few decades they will claim ownership of those they occupying now.