Ku Li:'Without a leadership change,Umno will lose the next elections.'...

This article appeared on The Business Times,Singapore 13 Mei 2008. 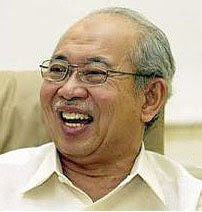 He'll contest presidency in December party polls; says Umno must look beyond its own race for peace, stability

WHEN Malaysia's second premier Abdul Razak Hussein died in 1976, his successor, Hussein Onn, looked for a deputy from among the three elected vice-presidents of the ruling United Malays National Organisation, or Umno. He offered the job to Tengku Razaleigh Hamzah, then 39, and the head offledgling oil corporation Petronas.

The prince from north-eastern Kelantan state declined the offer. 'I was too young and I thought that Dr Mahathir was the better man then,' says Tengku Razaleigh. Mahathir Mohamad, then 50, accepted Mr Hussein's offer and went on to become prime minister in 1981, a position he kept until Oct 31, 2003 when he stepped down in favour of Abdullah Ahmad Badawi.

Mr Abdullah was once Tengku Razaleigh's comrade-in-arms when the prince locked horns with Dr Mahathir in 1987. Tengku Razaleigh lost that battle narrowly and is preparing for another in the wake of the National Front's disastrous showing in the March 8 general elections.

Now Mr Abdullah is his nemesis and Tengku Razaleigh, now 71, wants to contest Umno's presidency when the party holds its triennial polls this December. Traditionally, the president of Umno, the dominant party in the National Front coalition, assumes the prime minister post.

'Without a leadership change, Umno will lose the next elections,' says Tengku Razaleigh, a former finance minister and current Member of Parliament for Gua Musang in Kelantan. 'Since March 8, there hasn't been any proposal to effect real change, to accommodate those who voted against us. Many of them were National Front supporters.'

The prince is sitting in his study at his house on Langgak Golf, a swank and leafy suburb in Kuala Lumpur with residences there mostly belonging to ambassadors from developed countries. His study itself is a perfect-to-scale replica of the Oval Office in the White House, an indication, perhaps, of his ambitions for leadership.

Tengku Razaleigh is charming, a person who smiles easily and treats his guests with the utmost courtesy - a reflection of his upbringing. He is one of Malaysia's royals and is an uncle of the current sultan of Kelantan.

He looks mildly surprised when asked why he wants to take on Mr Abdullah. 'There seems to be no else to take this challenge,' he replies. 'They don't seem to want to remove him. If they don't, then I'll do it.'

But what if another challenger surfaces, such as deputy premier Najib Razak, or, as has been speculated, Trade Minister Muhyiddin Yassin?

'I have already offered myself,' he says flatly. 'I am not the type who flip-flops.' The latter reference is a jibe at the premier's frequent about-turns on government policy.

But it is not clear at all if Umno will help the prince's cause. He has been out of government since 1987, a period of time during which an entire generation of Umno leaders have come to the fore. Moreover, Dr Mahathir, probably mindful of the fright Tengku Razaleigh gave him in 1987, changed the rules governing challenges to the presidency. Now, any presidential aspirant has to get nominations from at least 30 per cent of Umno divisions across the country. That means that Tengku Razaleigh will have to get 58 nominations to become eligible for a crack at the top job - not impossible but not easy either given the power and potential patronage concentrated in the hands of the incumbent. Even so, his aides say privately that he could get as much as 70 nominations.

But the prince isn't so sanguine. 'Fifty-eight nominations aren't impossible if the whole thing is done in a free and fair manner,' he says. 'If it isn't, then even getting two nominations will be difficult. Even now, we have difficulty in just meeting members. And when we do, they get visits, representatives from various agencies will be sent.'

With his old-school charm and his seemingly innate sense of noblesse oblige, the prince hopes to restore Malaysia back to its days when tolerance was a given and not an empty catchphrase. 'We have been independent for 50 years and yet we don't have unity,' he says. 'There is racial polarisation in the universities, in the workplace. By this time, we should have attained some
sense of unity, policies should have been fine-tuned but we have instead fallen by the wayside.'

Would multi-racial politics be the answer? 'The Opposition did well because of our weaknesses, because the people perceived Umno has abused its power and the behaviour of certain leaders. But having said that, Umno must also look beyond its own race. You cannot have peace and stability without that.'

The prince talks candidly about the concept of Malay dominance which he thinks has been blown out of proportion. 'You must understand that for the Malays, there is no other home so we have this sense of attachment to the land,' he explains. 'It's bound up with the customs and Malay royalty. It's about leadership. But it's not as if they are running around with tomahawks. And there is nothing spelt out in the Constitution.'

Would he be prepared to work with Mr Muhyiddin as his running mate? 'I am open and should have no difficulty working with anyone,' he says. 'I am prepared to sit down with him.'

'58 nominations aren't impossible if the whole thing is done in a free and fair manner,' Ku Li says. 'If it isn't, then even getting two nominations will be difficult. Even now, we have difficulty in just meeting members. And when we do, they get visits, representatives from various agencies will be sent.' he added.
I have said before and will keep repeating over and over again,that it is just impossible for Ku Li to receive the 58 nominations he needed. Though Pat Lah may be seen to be like a clown flip flopping his way around,but the fact is that a majority of UMNO grassroot members are still behind him. Futhermore, Ku Li isn’t that popular as it seems to be. Even Kelantan UMNO isn’t supporting his cause. And at 71,the age factor is catching up fast for this Kelantan prince to be in Putrajaya.

( Will updates till I can manage to get to a computer or a cyber cafe, see U then)