Not many moons ago, scandal-plagued Najib Razak pointed to his defence counsel Muhammad Shafee Abdullah and answered with a smile – “I have this hotshot lawyer”. He was grinning from ear to ear, despite slapped with charges of money laundering, abuse of power and criminal breach of trust (CBT) with regards to RM42 million transferred to his accounts from SRC International Sdn. Bhd.

Najib Razak’s popularity skyrocketed on the world map – the only former prime minister slapped with record number of charges. And he was pretty proud of it. The crook has under his belt a jaw-dropping 42 counts of corruption and money laundering charges. Yet, Mr. Shafee had consistently bragged that he will easily win the case for his client.

In fact, the arrogant Shafee was so cocksure he could once again pervert the country’s Kangaroo Court and the corrupted judicial system, as he had done before for years, that he questioned the readiness of the prosecution under the newly crowned Attorney General Tommy Thomas. He argued that since the prosecution was ready as far back as July 2015, there was no reason to start the trial in Feb 2019.

Shafee made that statement back in July 2018, where the High Court set the trial dates for the corruption trial of Najib as Feb 18 to 28, March 4 to 8, and March 11 to 15, 2019 – for a total 19 days. Shafee was referring to the charge papers prepared by then Attorney General Abdul Gani Patail in 2015, before he was unexpectedly fired by ex-PM Najib Razak.

After Gani was stunningly fired, it was later revealed that he was actually in the middle of preparing charge sheets (warrant arrest) against Najib Razak. The MACC (Malaysian Anti-Corruption Commission) investigation papers on SRC International (involving RM42 million) concluded there were at least 37 separate charges that could be made against Najib.

What the public didn’t know was that along with the firing of former A.G. Gani, most of the evidence in the form of paper trails implicating Najib was destroyed. That explains why the new A.G. Tommy required so much time to rebuild the case. It didn’t help that the MACC and the Royal Malaysia Police were still packed with loyal supporters – mostly corrupted – of Najib Razak.

For two months since Najib was paraded in the court, his so-called hotshot lawyer had been ridiculing, mocking and insulting the judiciary system and the prosecution team. But in September, the fat cat of UMNO called Shafee  was arrested under Anti-Terrorism Financing and Proceeds of Unlawful Activities Act 2001 (AMLA) and was slapped with two charges of money laundering.

Initially, Mr. Shafee rubbished the allegations that he had taken RM9.5 million from Mr. Najib – calling it “total nonsense”. After his arrest, the lawyer finallyadmitted that he did receive the money after all. His crappy story after being caught was that the RM9.5 million was payments for the 46 election petitions he had handled for the previous Barisan Nasional government from 2004 to 2006.

Najib’s lead counsel has since stopped boasting about his cleverness and exceptional intelligence in the court. When the due date for his client Najib arrived in February this year, he started demonstrating his true skill – delays the trial. And you don’t need a rocket scientist to predict that the so-called hotshot lawyer will keep filing for a stay of the start of the court hearing, for as long as he could.

As one of UMNO top legal advisers, Shafee was one of the most sought after lawyers. He won truckloads of cases not because he was the best legal eagle money can buy. He was a hotshot attorney because he had the political connections to bend the judiciary system to his liking. As he walked the corridors of power, the Palace of Justice would “kowtow” to him as money changes hands.

But bribing judges to win cases isn’t Shafee’s only exotic skill. He is also a specialist in using medical leave as an excuse to postpone his cases. Two days ago (March 12), the entire country burst into laughter after he stunningly used a very common excuse among lazy students who did not do their homework – the dog ate the homework!!

Running out of the normal excuses in delaying his client’s trial, Shafee skilfully convinced the Court of Appeal that he could not continue with his submission on the appeal filed by Najib Razak relating to his criminal charges involving SRC International Sdn. Bhd. funds. Apparently, his pet dog jumped on him, causing his fractured left wrist.

The shameless lawyer had even pretended that his office was under public pressure for Najib’s trial to begin as soon as possible. He talked as if it was his dog’s fault that the trial could not start. And he talked as if he would definitely win his argument had his wrist not hurt by the damn dog. Naughty rumours say he will request for another delay because his pet bird is about to poke his eyes.

Yes, it appears Mr. Shafee lives in a mini zoo, surrounded by pets and animals which had received training in martial arts and self-defence classes. Amusingly, when the social media made a joke of his unbelievable doggie excuse in order to chicken out of the trial, the hotshot lawyer loses face. What he did thereafter was equally entertaining.

Like a bad boy caught with his hand in the cookie jar, the top legal eagle took the trouble to compose a long-winded essay – explaining how he acquired his super dog and had it trained to become a mighty guard dog. He even boastfully said he has a professional dog trainer who was a former K-9 unit police trained by the fearsome FBI (Federal Bureau of Investigation).

As if the dog was let loose for the first time in its life, Shafee claimed his muscular dog got excited and rushed towards him. Perhaps he should be charged for animal cruelty. Of course, the crooked lawyer was no match for the super dog. He lost his balance and fell on his left arm. If the dog wasn’t his, you can bet your last penny he will sue the shit out of the damn dog.

Even if Shafee was telling the truth, which is not, it’s absolutely puzzling why his 7-member strong lawyers could not take over from him temporarily while he nurses his injury. Are all the defence lawyers retarded, leaving Shafee the only best brain in the team? Perhaps Najib’s hotshot lawyer thinks the 33-million Malaysians are as stupid as a donkey.

Mr. Shafee’s lengthy explanation about his dog story to convince the public that he didn’t lie was a dead giveaway that the defence team is incredibly desperate and panicked. His client – Najib Razak – knew that his honeymoon is coming to its end. If indeed his lawyer was as powerful as he claimed to be, there was no reason for him to repeatedly delay the trials using such childish excuse. - FT

No wonder this MO1 is so famous throughout the world as a thief and liar where he can just slip out without the court noticing. - Chang for good

Can an accused just walked out of the court room without anyone noticing it..what if he is a wanted fugitive.Any accused will know that you cannot simply walked out of.the Court.room when it is in Session and why is this accused not sitting in the dock...please have respect for the.Court and why is the Judge tolerating this accused behaviour when noone is above the law.. - Dont just talk

Dad went in for prayers and never came out 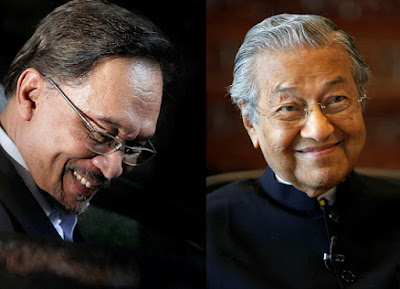