Why Felda's peasant settlers are against FGV listing... 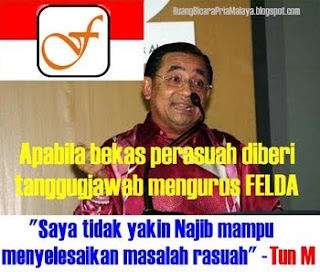 An injunction application by a few settlers to stop the Felda Global Ventures listing. Why the injunction? Why should four people extend energy and time and assume the risks of being called traitors and all that, to apply for an injunction?

Greed can’t be the overriding objective. If it is, it’s more profitable for the four people to side with chairman Isa, who can be generous if he is pleased.

The object of the injunction is to stop FGV from taking over assets and shares belonging to KPF in Felda Holdings. These people believe that the 350,000 hectares of land that Felda took was actually meant for settlers.

They are willing to risk it all, because they believe settlers are being sold out.

This listing is the ultimate shortchanging of settlers. The first occurred when Felda withheld more than 300,000 hectares of land from being given to settlers. By assuming ownership of the land, Felda was able to become a planter itself.

So we have the peasant settler and the corporate settler. The corporate settlers have moved on to becoming fabulously rich while the peasant settler (Tun Razak’s regimented landless and jobless) has remained relatively behind. They get to enjoy the trickle down effects defined and determined by Felda who practically run the business on behalf and for the benefit of settlers.

If the injunction is successful, the proposed listing of Felda Global will be delayed. The listing will see the merger of Felda Holdings with Felda Global. The smaller partner in terms of equity, Felda Global is buying out KPF who has 51 per cent.

How is the nature of the transaction? Does it involve an offer by FGV to buy out KPF at a certain price, or will it involve just a share swap? You priced it with premium, fella; that’s why KPF is getting 61 per cent.That’s good, you say. Isa Samad goes around berating ungrateful settlers — apa lagi awak semua mahu, dari 51 per cent jadi 61 per cent?

That’s not all. Thirty per cent will be held by the public; the interests of settlers are converted into shares that are tradable in the market place. As with the track record of Bumiputera-held equities, you can bet that, chances are, the shares will be sold.

We have to go back to the primary source of dissatisfaction. The peasant settler has remained more or less the same. The corporate settler has made it big. The peasant settlers get palliatives, bonuses here and there. RM1,200 as a yearly bonus translates into RM100 per month. RM400 per year translate into RM30 per month — not even enough to buy a T-bone steak at Meatworks.

The peasant settler gets MRSM colleges, indoor stadiums, futsal stadiums and other social amenities but the value of these pale in comparison with the amenities and wealth-enhancing resources obtained by the corporate settler.