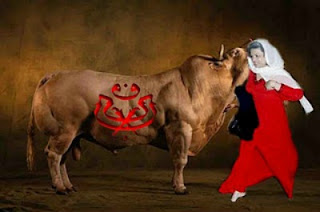 Umno has decided to save Shahrizat Jalil and paint her husband as the main actor behind the scandal of the year, the National Feedlot Corporation aka the government’s transformation programme (cows to condo).

Leading her defence is the man who helmed the Agriculture Ministry when the NFC project was promoted, Tan Sri Muhyiddin Yassin, best known as a defendant in the Stamford Hills controversy (please Google and read up). His main argument is that why single out the minister when she had no role to play in the NFC.

I suppose that sounds fair except that we still don’t why Muhyiddin and his ministry officials approved this project to greenhorns. If the opposition does some digging, it will realise that as early as two years ago government officials felt that NFC was doomed.

Also, as the disclosures by the opposition show, Shahrizat’s expenses were paid by funds from NFC and that her husband and children were paid silly money every month. They also set up some restaurants and the beef from the NFC made its way there.

Muhyiddin and friends would like us to believe that Shahrizat was completely in the dark about the financial benefits which accrued to her family after their involvement in the NFC.

I am told that there are vouchers which would make quite a few politicians blush. Maybe this is why Umno is worried about leaving Shahrizat out to hang.

Already, you have Cheras Umno leader Syed Ali Habshee clarifying his comments and saying that he did not single out Shahrizat but her husband.

It is clear that the government will appoint some auditors to do some study on the NFC, buy some time and then lump all the blame on everyone, except the minister.

All’s well that ends well. Only one small problem, more than RM90 million will be lost for forever. - Gomen Man