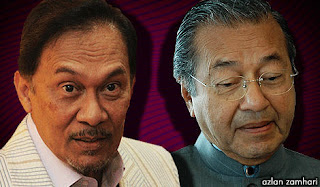 Opposition leader Anwar Ibrahim made a startling allegation against Dr Mahathir Mohamad, claiming that the former prime minister had written to the World Bank for funds during the financial crisis in 1999.

In an effort to clear the "US agent" label against him by Umno and Mahathir, Anwar last night told a dinner attended by foreign ambassadors that in 1993, he had written to the World Bank in his capacity as finance minister to reject financial assistance.

“Of course, I had to chair the development committee of International Monetary Fund (IMF) and World Bank.

For that I was portrayed as American agent, but the fact remains it was me in 1993 who wrote to the World Bank to say we are not requiring its funding. “In 1999, the then prime minister Mahathir wrote to the president of World Bank appealing for funds and (to) borrow from World Bank,” he claimed.

The dinner was organised by the Selangor state government, at which Anwar delivered a speech titled ‘Debunking ETP: Widening Income Gap’ to some 150 guests, including foreign ambassadors, economists, academicians, MPs, party leaders and journalists.

Wasn't that a paradox?

Anwar, who is also the Selangor economic adviser, was asked whether Malaysia was prepared to brace itself against the Eurozone crisis, but he digressed from the question and recounted the difference between him and Mahathir during the crisis.

The PKR de facto leader said he was not aware of Mahathir's action as he was jailed in 1999, and only discovered it during his consultancy work for the World Bank after he was freed.

“Wasn't that a paradox? Anwar, who was accused pf being a dependent on the World Bank decided to stop borrowing from the World Bank, but the guy who was anti-IMF and World Bank wrote quietly asking for funds,” he said.

Anwar was the finance minister from 1993 to 1998, under Mahathir's administration. Their mentor-protege relationship collapsed during the 1997 Asian financial crisis, leading to the sacking of Anwar.

He was then found guilty of sodomy and abuse of power, which landed him behind the bars for five years until 2004 after the Federal Court overturned his sodomy conviction.

Mahathir, who has been portraying himself as an anti-Western imperialism leader, accused Anwar of selling out the country by accepting the austerity package prescribed by IMF.