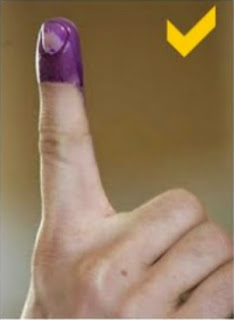 The Election Commission (EC) is ready to adopt indelible ink usage during elections, pending the final approval from the National Fatwa Council.

"EC secretary Kamaruddin Ahmad Baria told us they are ready and can use indelible ink.

"They are waiting final approval from the National Fatwa Council to ensure that the materials used in the ink comply with syariah (Islamic law)," Segambut MP Lim Lip Eng told reporters after a meeting between DAP parliamentarians and Kamaruddin in Putrajaya today.

Among the issues include halal content of the ink and whether it interferes with the process of ablution.

However, fellow MP Teresa Kok, who joined Lim, said Kamaruddin told them at the meeting, lasting over an hour, that voting abroad is still under careful study by the commission and implementation will not be anytime soon.

Both overseas voting and indelible ink usage are part of 10 interim recommendations that the bipartisan parliamentary select committee (PSC) on electoral reform had tabled and were endorsed by the Dewan Rakyat yesterday, on the final day of its sitting for this year.

Agencies such as the EC, which were named as implementers, have two weeks from today to give the timetable for the execution of the recommendation or list out to the PSC the hurdles to be overcome.

During the meeting, the DAP also raised several complaints with the commission on electoral roll irregularities and difficulties faced by voters who want to amend their voting records at post offices.

Kok said the EC secretary pledged to accept the hundreds of voter registration forms, which had been stranded after the EC, without notice, implemented a new regulation requiring all new voter registrations to be accompanied with photocopies of the MyKad.

“It is a huge relief for us, as we have hundreds of forms that were stranded,” said the MP.

Cheras MP Tan Kok Wai (left) told reporters at the same press conference that he brought up the case of a 24-year-old voter who tried to change the address in his voter registration at two post offices, to no avail as the staff on duty were unable to find his records, and in he ended up registering as a new voter.

Tan said that the EC admitted at the meeting that it was their mistake, since some of the more than 600 post offices nationwide authorised to handle EC business were not given access to the up-to-date electoral roll.

Lim said the EC also admitted that the current crop of postal workers are not adequately trained on EC procedures, relating instances where postal workers themselves were unable to tell voters how to fill in the forms.

Bukit Bintang MP Fong Kui Loon, who was also at the meeting, had complained about two men aged 83 and 52 who found that they were listed as “deceased” in voting records.

“They blamed the National Registration Department for this. The EC had recorded that the duo were ‘orang dah mati’ (already deceased),” Fong said.

Concern whether the use of indelible ink would contravene Muslim restrictions from permanently marking their skin and body was raised by Independent Pasir Mas MP Ibrahim Ali in the Dewan Rakyat yesterday, when debating the PSC report.