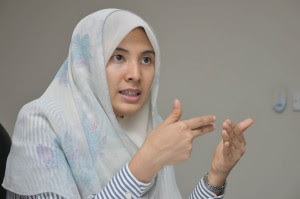 The MP for the constituency told reporters today that while the identity card (IC) number RF161872 corresponded to a Mohd Faizul Mohd Yusop on the Election Commission’s (EC) online database, “Balai Polis Kerinchi is on the official electoral roll that will be used.”

“We don’t know if it’s Balai bin Polis Kerinchi or Balai Polis bin Kerinchi,” she said. “This is the gazette for the third quarter. If elections are held tomorrow, this is the list we will use.”

She also claimed 96 other errors in the list of 2,180 postal voters such as ICs that were not on the EC’s online database, voters who can cast their ballot in two constituencies and also two different places in Lembah Pantai itself.

The other unsettling problems were of voters whose records are not found on the EC’s website but appear in the electoral roll.

“What’s more unnerving are the voters who are listed in two voting districts, for example, Saripah Arif (RF90153), is listed as a postal voter in Pantai police station as well as Pekan police station, which is all the way in Pahang,” she exclaimed.

Pakatan Rakyat (PR) has repeatedly complained of errors in the electoral roll with DAP Youth chief Anthony Loke recently claiming that military ICs were used to register both a male and female postal voter each.

Tens of thousands had poured into the streets of the capital to demand free and fair elections in the July 9 Bersih rally that resulted in a bipartisan parliamentary select committee to improve the electoral system.

The panel made 10 interim recommendations last week including the use of indelible ink to prevent multiple voting, a royal commission on allegations of foreigners being given the right to vote in Sabah and allowing Malaysians residing overseas to vote.

Nurul Izzah (picture) had questioned early last month the nearly 15-fold increase in the number of postal voters from the 149 that were registered for the March 2008 polls.

“This is after the EC listed 40,000 suspect names but none of these 97 were included. How can they approve that list?” she said, referring to the list that was released last month.

She said that the solution to such doubts was to abolish postal voting and implement early voting along with indelible ink to prevent phantom or multiple voting.

She added that the dubious records found were not part of the 42,000 doubtful names displayed by the EC since mid-October.

“We have highlighted the problems to the EC, but this is not our job. If you expect us to check every name on the electoral roll why do you need the EC?”

“The system is not clean, not fair and riddled with irregularities,” said Nuril Izzah, adding that there is a pressing need for the implementation of the indelible ink and advance voting in the election regulations.

The EC has admitted to irregularities in its voter database, saying that some of those in the electoral rolls had questionable registration documents.